Chitrakoot means the ‘Pictuerous Hill’. It falls in the northern Vindhya range of mountains spread over the states of Uttar Pradesh and Madhya Pradesh. Chitrakoot Parvat Mala includes Kamad Giri, Hanumaan Dhara, Janki Kund, Lakshman pahari, and Devangana famous Religious mountains. Lord Rama spend a major part of his exile here. Chitrakoot is the place where Bharat, brother of Lord Rama came to visit him and asked him to return to Ayodhya and rule the kingdom. The place is dotted with many temples and religious sites. Chitrakoot is a perfect blend of divinity, serenity, and natural beauty.

It was long in my "To Visit" list. Finally I got this opportunity.

Chitrakoot can be accessed easily via road or railways. We decided to drive. From Lucknow its about 6 hours drive.

It was a beautiful sunny morning, as I picked Deepak on the way. Vishal and Prashant were waiting near stadium.

So we four, took the Lucknow - Lalganj - Fatehpur - Chitrakoot road.

The road was good overall except some rough patch, specially after Fatehpur. It was noon time as we reached there.

Prashant had already spoken to Hotel Panchvati on the banks of Mandakini. It is a good hotel to stay. Food here is very good and hygienic.

The entry to hotel from town are was blocked due to flood in Mandakini. So we have to take a detour from the back side through premises of Arogya Dham.

A good food and some rest, and we were ready for exploration.

Chirakoot is known to have a great religious connection with Ramayan. Lord Ram and Sita spent eleven of their fourteen years of exile in the deep jungles of Chitrakoot. Hanuman Dhara, Sphatikshila, Bharat Milap temple, Gupt Godavari, Janki Kund, and Ram Ghat are major attractions and fascinating places to see in Chitrakoot.

Valmiki speaks of Chitrakoot as an eminently holy place inhabited by the great sages, abounding in monkeys, bears and various other kinds of fauna and flora. 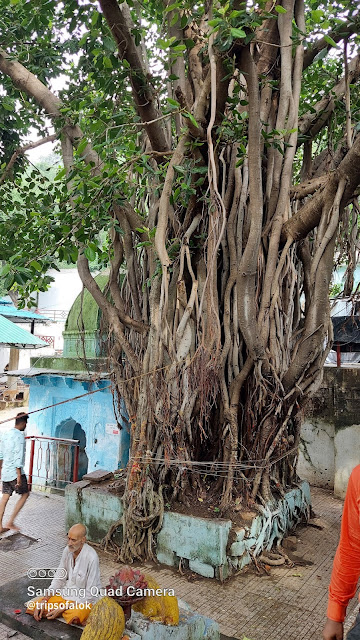 Tulsidas, the saint-poet has spoken very reverently of Chitrakoot in all his major works-Ramcharit Manas, Kavitawali, Dohawali and Vinaya Patrika. The last-mentioned work contains many verses which show a deep personal bond between Tulsidas and Chitrakoot. He spent quite some part of his life here worshipping Ram and craving his darshan. It was here that he had what he must have considered the crowning moment of his achievements—i.e. the darshan of his beloved deity Lord Ram at the intercession of Hanumanji. 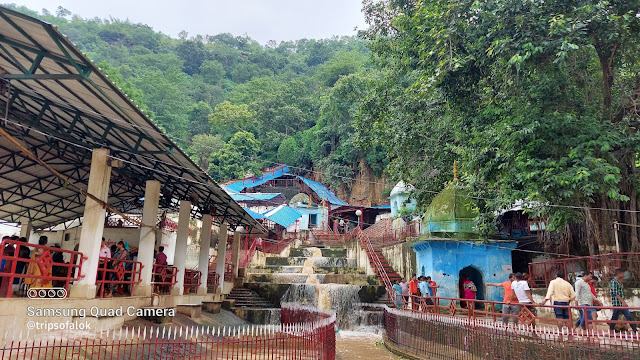 As it was afternoon time, so we decided to cover Gupt Godavari first and then Sphatik Shila.

Legend about Gupt Godavari is that Lord Rama and Lakshman stayed here for some part of their exile. Gupt  Godavari is a two cave system inside a mountain with about a feet high water level. It was raining heavily these days and when we reached, the water was overflowing from the cave and had flooded the road outside as well. We could go inside the first cave but the sceond cave was closed due to high water levels. This cave system is said to be the place, where Ram, Sita and Lakshman resided.

Our next destination was Sphatik Shila.

The sphatik shila is a small boulder situated on the banks of River Mandakini, upstream from the Ram Ghat. This place is believed to be the spot where Jayant, Lord Indra’s son, disguised as a crow pecked Sita on her foot. This boulder still bears the imprint of Rama’s feet. 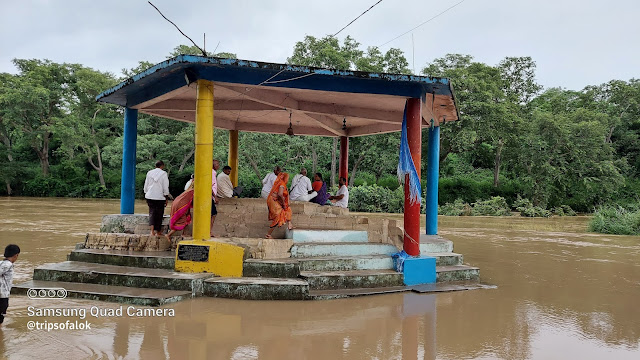 As river Mandakini was flooding so we have to cross a small water channel to reach the Sphatik Shila. Place was quite peacefull and blessed with presence of Lord.

There ws still dayligt left so we decided to go to Anusuya Ashram. 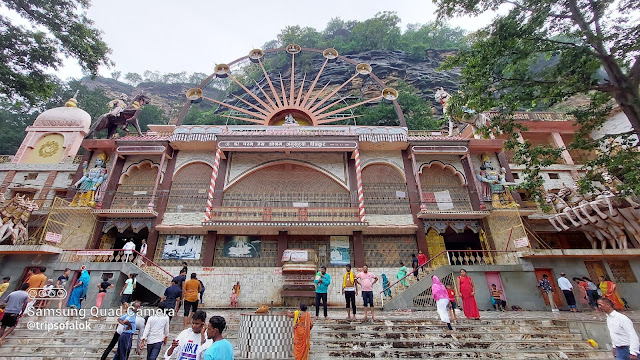 This ashram is known to be the meditation place of Sage Atri and mother Anusuya. During exile Lord Rama and Mother Sita visited Sati Anusuya at this ashram. Sati Anusuya used to teach Mother Sita. There are many sculptures with interesting artwork here. This place is very good and a must visit.

As per description of Valmiki Ramayan, at one time there was no rain in Chitrakuta for ten years. There was a severe famine and nothing was left to eat or drink for animals and birds. Sati Anasuya performed hard and intensive austerities and got the river Mandakini down on earth. This led to the greenery and forests to grow which removed the sufferings of all sages and the animals.

The dense forests of Dandaka start from this place. During those days, It was ruled by Ravana. Ravana had appointed strong rakshasas like Khara and Dushana as its rulers.

It was getting dark now, so we decided to go to Ramghat. 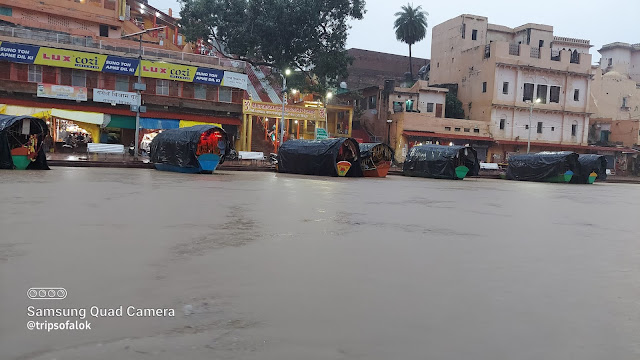 It was drizzling a bit but place was full of energy and bliss. Stepped edges leading into the river Mandakini and a serene environment is what one will find here.

This riverside is known to be the place where Lord Rama, Goddess Sita and Lord Laxman interacted with Saint Goswami Tulsidas. A flight of steps take us to that temple. 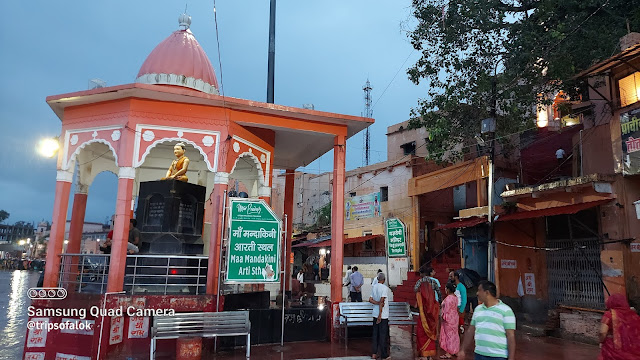 Even though it was drizzling and the river was flodded, this place ws full of activity and a seething crowd. Colourful boats were lined up there and though at that flood situation it was not advisible, but still we decided to take a boat for ride, after competeing a to and fro exploration of Ram Ghat. Lit up ghat and surrounding area was very beautiful in the night. One should not miss the evening Aarti on the Ram Ghat. Though we could not enjoy that as due to flood it was cancelled. 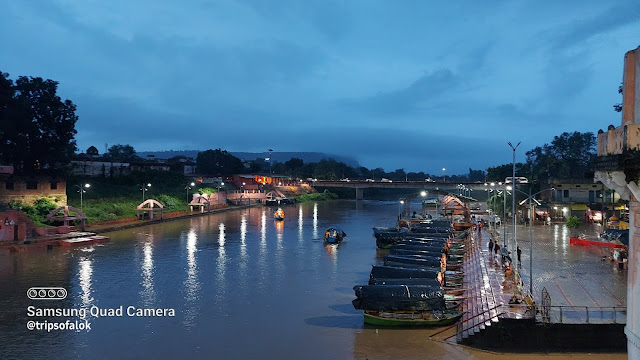 We retuned back to Hotel and decided to cross the flodded bridge in our Car. The water was a bit less, though it is never advisible to drive vehicale on a flodded bridge as the vehicle may drift or bridge itself may collapse. 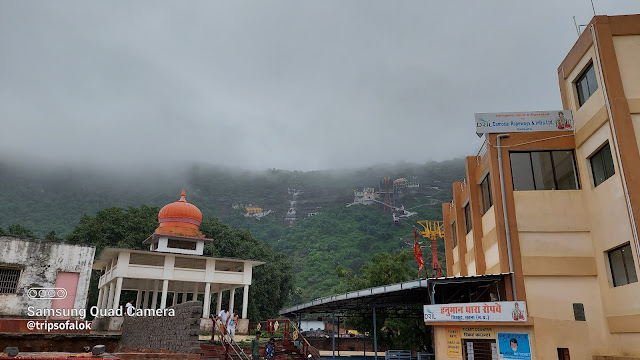 We took good dinner and then a stoll on the river banks. As drizzling converted into rains, we ran towards cozy shelter of our rooms at night. 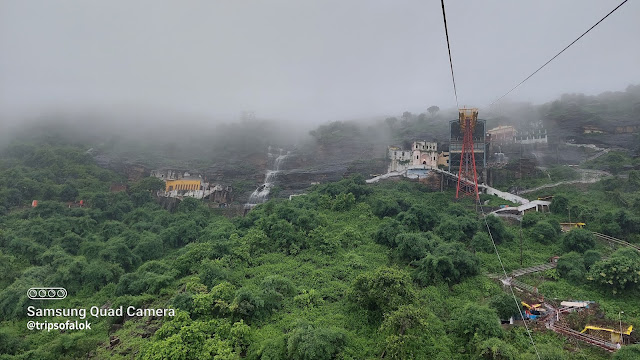 Early morning, we started for Hanuman Dhara. As we reached there it was a bit disappointing to know that because of heavy winds, the cable car was suspended. It was drizzling so we decided not to over it by foot. We waited for some time and in next half an hour the cable car was ready to ferry us.

This Hanuman temple is situated on top of a small hillock. A steep climb of several carved steps lead to the temple. Now the apprach has been easy with Cable Car. Excellent views of nature and Hanuman Dhara waterfall can be enjoyed from here. It started raining heavily as we were there. Further up from this point are a few more shrines dedicated to Lord Rama, Mother Sita and Laxman, where we went as well and got blessed. 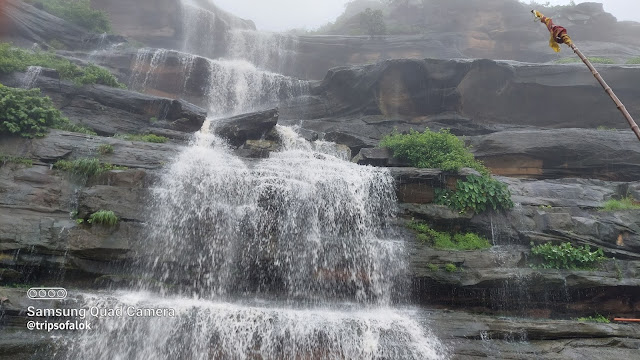 We returned back and went to Kamad Giri to worship Lord Kamtanath. 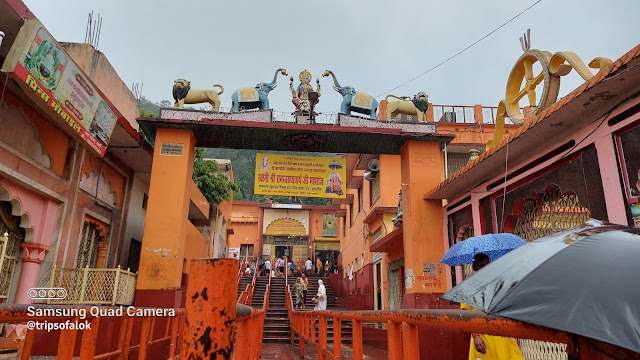 This temple of Shiva was full of devotees. This area is believed to be the original Chitrakoot. The Bharat Milap Temple is also located here. Pilgrims perform a ritual circumambulation of the hill to seek blessings. Though we just prayed he Lord for blessings.

Our next destination was Ram Darshan.

So it was quite fruitful first half, we decided to go towards Shabari Falls now.

Though it was raining, still we thought to go there as during this time, the beauty of waterfall is at its peak. The fuel meter of ny car was going South so we stopped briefly at a Fuel station. The person there told that road towards the fall is flodded. As we had already covered a good distance so still we decided to go till whereever possible.

A few KMs down, we came across the flodded road and had to halt. There was no option to cross the stream and we returned back.

It was about noon time and we had explored almost all main points at Chitrakoot, so decided to move on for Lucknow. 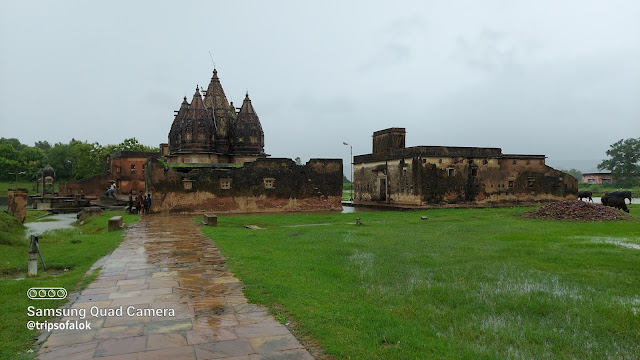 On the way, we crossed through Ganeshbagh and stopped there briefly.

Ganesh Bagh is located on the Karvi – Devangana road. It was built in the 19th century by Vinayak Raj Peshwa. This place consists of a temple which has carvings on its interiors, resembling the art and style of Khajuraho. This place is also known as mini Khajuraho, owing to its architectural similarity with original Khajuraho. 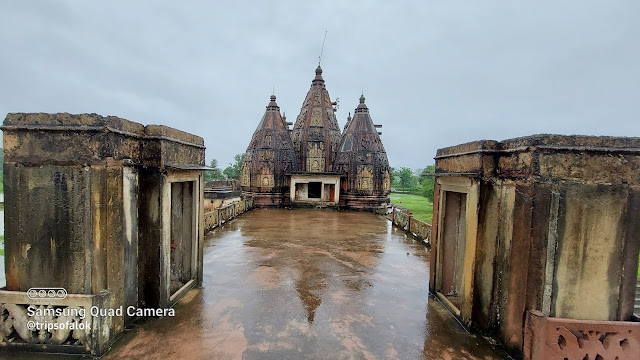 It also has a large pond and gardens. There is also a Bowli (Step Well) here. 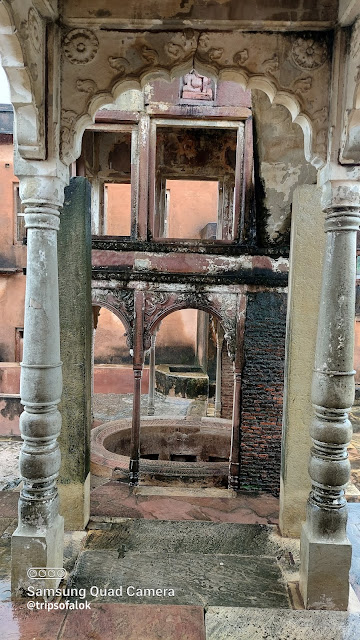 We were not aware but luckily we took another road to Lucknow. It was not teh same through which we came. Google took us through the old town of Rajapur.

The road was narrow and bad. But still we pressed on to visit the sacred place, the birth place of Sage Tulsidas.

A drive of about an hour from Chitrakoot, took us to Rajapur.

It was drizzling and on the road, at a place beacuse of pothole, a lot of water was there. I misjudged its depth and it was quite deep. I realised when Car entered into it. Luckily it didnt stopped and we were lucky to come out of that safely.

Slowly we covered the narrow lanes to reach "Tulsi Niwas".

It was at the banks of Yamuna. There are two temples, teh first one is where a few pages of original handwritten "Ram Charit Manas", has been kept. 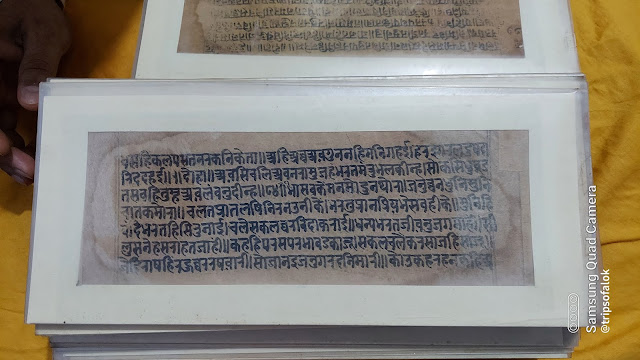 A few meters ahead is ancestral home of Goswami Tulsidas ji. Which is now reconstructed and changed into a temple.

We visited both the places and spent some time in vicinity of the place, made sacred by unparallel devotee sage Tulsidas ji. 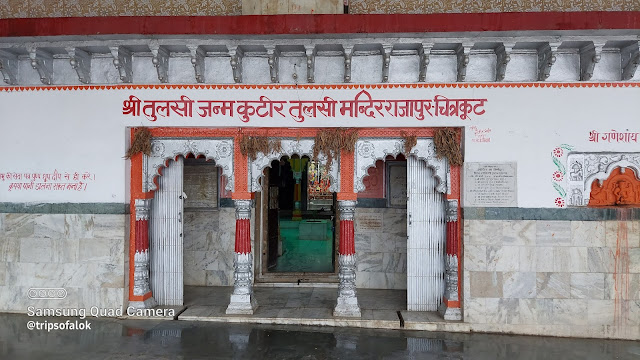 In his temple, his "Khadau" (wooden slipper) is still there and also there is a small idol of Lord Narasmiha which Sage Tulsidasji, used to wear in his neck and worship. 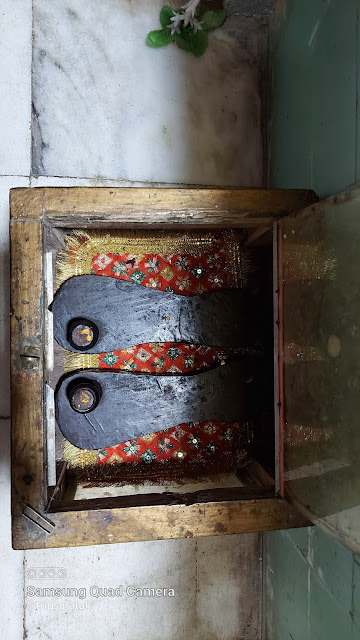 From here the view of River Yamna is very beautiful. Across teh river is home of house of In-laws of Tuldidas ji. There is a small temple there in memory of his wife, because of whom, Tulsidas ji got inspiration to become ascetic.

It was late afternoon and amidst dense cloud and showers, we took the Lucknnow Highway.

Almost at Dinner time, we were at home, sweet home!