During my recent visit to my home at Lucknow, I decided to visit Ayodhya. It was Tuesday, 1st October. I had been to Ayodhya in February this year, but was able to visit only Hanuman Garhi, because of scarcity of time. So I thought of going there. I asked my parents and they arranged an Indica for me. Though I wanted to drive my Maruti Omni, but parents thought, that I should not be tired and should relax in my trip.

The route from Lucknow is Lucknow-Barabanki-Faizabad-Ayodhya.

From Lucknow we started at around 8:30 in Morning. When we started from Lucknow, the weather was fine but as soon as we crossed Barabanki, it started raining and then whole day it was raining but we continued. During darshna at RamJanma Bhoomi we got drenched but the Darshan of Lord deprived of all physical exhaustions.

First of all we visited with the darshan of river Mother Sarayu. During recent heavy rains, the water level was very high. We paid our prayers to mother. She is the one who has seen the Lord of Lords, King of Kings, the Lord Rama, appearing in human form here.

Ayodhya is an ancient city, the old capital of Awadh, in the Faizabad district of Uttar Pradesh. 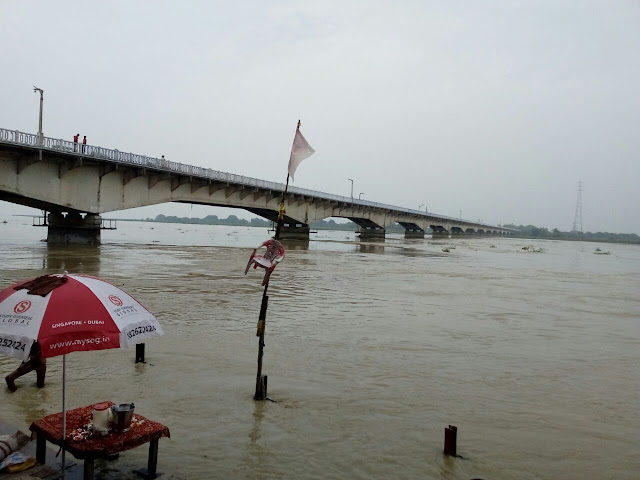 This holy city is described as early as in the Hindu Epics. During the time of Gautama Buddha the city was called Ayojjha (Pali). Under the British Raj the city and the administrative area around it was called Oudh. It is on the right bank of the river Sarayu, 555 km east of New Delhi and about 135 KMs from Lucknow. The word ayodhya is Sanskrit for "not to be warred against". Some Puranas like the Brahmanda Purana (4/40/91) consider Ayodhya as one of the six holiest cities on this planet.

The ancient city of Ayodhya, according to the Ramayana, was founded by Manu, the law-giver of the Hindus. For centuries, it was the capital of the descendants of the Surya dynasty, of which Lord Rama was the most celebrated king. Ayodhya during ancient times was known as Kosaldesa.

According to tradition, Ikshvaku was the eldest son of Vaivasvata Manu, who established himself at Ayodhya. The earth is said to have its name 'Prithivi' from Prithu, the 6th king of the line. A few generations later came Mandhatri, in whose line the 31st king was Harishchandra, known widely for his love of Truth. Raja Sagar of the same line performed the Asvamedha Yajna and his great grandson Bhagiratha is reputed to have brought Ganga on earth by virtue of his penances. Later in the time this clan came to be called as Raghuvamsha. Bhagirath's Grandson was Raja Dasharatha, the illustrious father of Lord Rama, with whom the glory of the Kosala dynasty reached its peak. The story of this epic has been immortalized by Valmiki and immensely popularized by the great masses through centuries. According to puranic tradition, in the 93rd generation from Ikshvaku, the 30th from Rama was Brihabdala the last famous king of the Ikshvaku dynasty of Ayodhya, who was killed during the Mahabharata war. The kingdom of Kosala again rose to prominence in the time of Buddha, i.e. 6th century B.C.

In the first few centuries of the Common Era (AD), it was called Saketa. Saketa was conquered by the great Kushan / Yuezhi Emperor Kanishka c. 127 CE, who made it the administrative centre of his eastern territories. The name occurs again in Faxian as in the early fifth century. It is not clear when the name changed, but by the time of the visit of the Chinese pilgrim monk, Xuanzang, c. 636 CE, it was known as Ayodhya.

According to the Hindu traditions, it is said to have covered an area of 250 km² (96 square miles), and was the capital of the kingdom of Kosala (Kaushal), the court of the great king Dasharatha, the 63rd monarch of the Solar line. The opening chapters of the Ramayana recount the magnificence of the city, the glories of the monarch and the virtues, wealth and loyalty of his people. Dasharatha was the father of Rama, the Seventh Avatar of the Vishnu.

Ayodhya is also the birth place of five Tirthankars, including the first Tirthankar of Jainism, Shri Rishabh Dev. He is known as the father of Jain religion. The city is also important in the history and heritage of Buddhism in India, with several Buddhist temples, monuments and centers of learning having been established here during the age of the Mauryan Empire and the Gupta Dynasty. Ayodhya reached its glorious peak as known to history during the reign of the Guptas over India.

Tulsidas is said to have begun the writing of his famous Ramayana poem Shri Rama Charita Maanas in Ayodhya in 1574 CE.

The Atharva Veda called Ayodhya "a city built by gods and being as prosperous as paradise itself".

Ayodhya was the victim of pillage and sacking during the Muslim raids and invasions. Many temples were looted and destroyed.

The Thai kingdom and city of Ayutthaya were named for Ayodhya, reflecting the common Southeast Asian practice of adopting place names from Hindu kingdoms.

According to an 11th century Korean chronicle the Samguk Yusa, the wife of King Suro of the ancient Korean kingdom of Geumgwan Gaya was a princess, who travelled by boat from a faraway land called Ayuta to Korea in 48 CE. It is commonly thought that Ayodhya is the foreign land referred to in the Korean chronicles, but some scholars believe that the foreign land may have been Ayutthaya of Thailand. The Koreans know the princess as Heo Hwang-ok, who was the first queen of Geumgwan Gaya and is considered an ancestor by several Korean lineages.

Shri Ram Janma Bhoomi
Shri Ram Janm Bhoomi is located in Ram Kot ward of Ayodhya city. This place is supposed to be the birth place of Lord Ram. Baby idols of Lord Ram, Laxman, Bharat and Shatrughna are kept here. Presently, the Union Government is taking care of the area. A lot of security is there and everybody has to pass through many security checks. Nobody is allowed to carry anything except money, jewellary etc. Even pen, belt, mobile, camera umbrella and any kind of eatables etc. are not allowed. But it is allowed to go in shoes/slippers. Darshan happens from some distance and hence removing chappal etc. is not needed. No pooja etc. can be done at that site. Just pay reverence to Lord and move further.

Sita Ki Rasoi
Sita Rasoi is situated near north-western corner of Janmasthan in Ramkot ward. In this temple idols of four brothers Ram, Laxman, Bharat, Shatrughan alongwith their wives Sita, Urmila, Mandavi, Shrutikirti respectively are established. It is believed that after being married with Lord Rama, Sita ji cooked meal for her family for the first time at this very place. Symbolic kitchen utensils are point of attraction to the tourists. 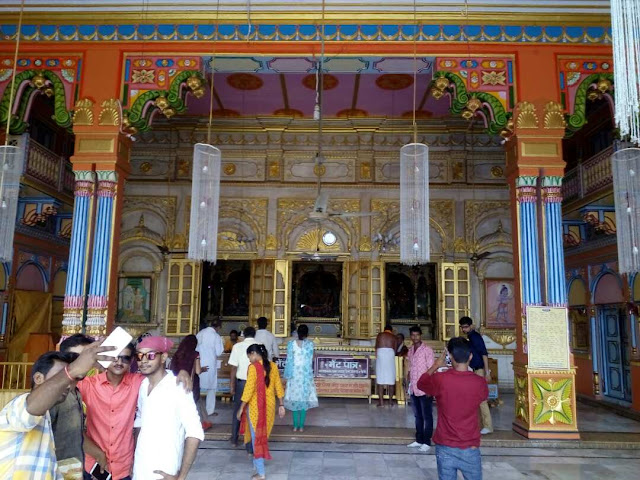 Kanak Bhawan
It is one of the important temples in Ayodhya. It is a grand temple situated in Ramkot ward. It was constructed by the courtesy of Ram Priya Queen Shri Vrishbhanu Kunwari of Orchha situated in the district Tikamgarh over 200 years ago. In this temple, three divine idols of Ram, Sita and Laxman are established. 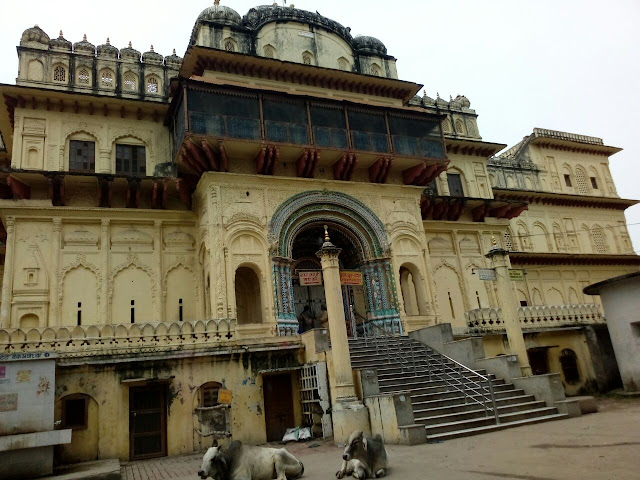 According to a popular story, this Gold-made Temple (Kanak Bhawan) was presented to Sita ji by her mother-in-law Kaikeyi in her first meeting. Also, a legend there is that Lord Krishna reconstructed the temple and placed here an idol of Ram-Jaanki.

After a period, Maharaj Vikramaditya and thereafter Queen of Tikamgarh again reconstructed the temple. The birth- ceremony of Lord Ram and Shri Kishoriji is celebrated with a great enthusiasm in the temple on Chaitra Shukla Navami and Vaishakh Shukla Navami respectively every year. In the yard of the temple, there is a well popularly known as Sita-koop. Devotees get delighted to drink its sweet water. There is a bed-room in the upper portion of the temple in which foot-prints of four brothers are kept on a thin leaf of silver.

Hanuman Garhi
Hanuman Garhi is located in a fort situated at the western gate of Ram Kot as a place of watchman. Hanuman ji, is considered the Kotwal (watchman) of Ayodhya city. 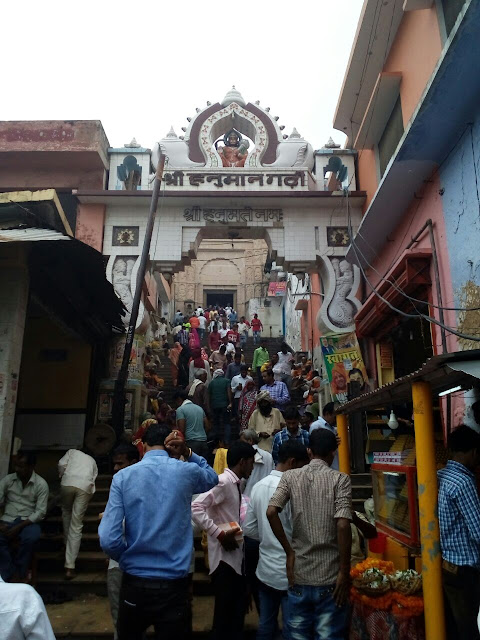 King Vikramaditya constructed this temple of Hanuman ji. After a period Nawab Mansoor Ali constructed a fort around the temple through Tikait Rai, which is now famous as Hanuman Garhi. In this temple, golden idol of Shri Hanuman ji in the lap of his mother Anjani is established. It was the first Day of Navraatri and also Tuesday, so auspicious in all manner. We were fasting on that day. 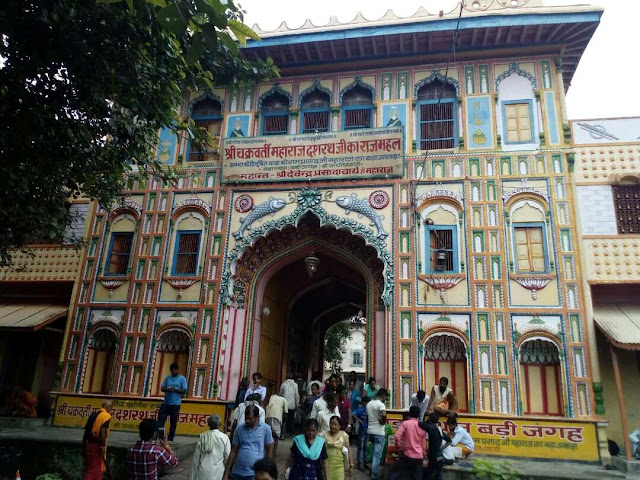 It is close to Ramkot. It is said that at this place, was the palace of King Dashrath. Beautiful place and must visit.

After visiting Ayodhya, we started back to Lucknow and at Faizabad, we visited the temple of Mother Goddess Devkaali. Darshna of Mother always gives satisfaction and feeling of strength and confidence. This temple has been renovated with help of Pujya Gurudev Shri Shri Ravi Shankarji.

From Faizabad, we started at around 3 PM, reaching home at Lucknow at around 6 PM.

Trip was good but I was a little annoyed with administration of Ayodhya. Things can be better arranged and also city can be kept more clean. People of Ayodhya should also contribute in this.

How to reach Ayodhya
Ayodhya can be reached easily from Lucknow (about 135 KMs). From Lucknow a lot of buses, taxis and trains are available. Lucknow is well connected to rest of India by Air, Rail as well as trains.

If you are visiting here by your own vehicle, then better take a "Guide". This guide will approach you as soon as you enter into the Ayodhya town. They will be of great help as they will take you and your vehicle through narrow streets of Ayodhya, generally Google map is of little use here.
Posted by trips of alok at 1:10 AM