Belur and halebid (halebidu) are twin towns in Hassan district of Kartnataka state. Both are famous for magnificent temples centuries old. 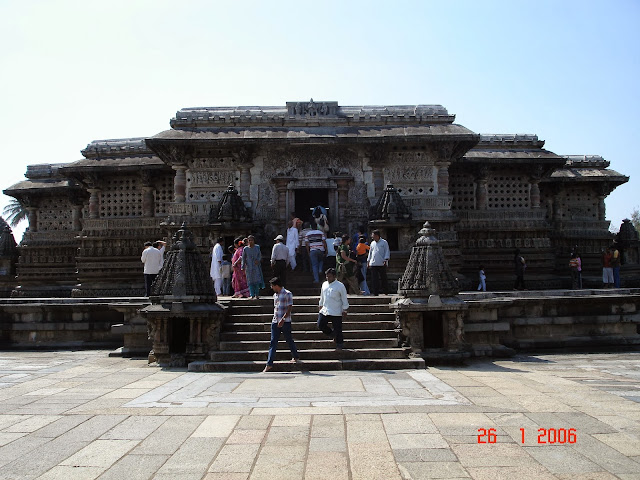 I have visited these places twice, first time along with friends Himangshu Agarwala, Pundareeka Bhat and Anil MS in Himangshu's Maruti Zen and the second time on 26th January, 2006 along with friend Nitin Agarwal in his new Hyundai Accent.

Belur is about 215 KMs from Bangalore and Halebidu is 16 KMs further.

On the way to Hassan, we crossed Hirisave and Chennarayapatana. These are the places from where a turn can be taken towards Shravanbelagola.

We also met many a bikers. They were driving at very high speed, I assume at around 100 KMph. They crossed our Car. I was a little amzed with their dare-devilness. At this speed, the two wheelers become very much prone to accidents. A small touch from any other vehicle etc. may throw it off the road. We should NEVER get tempted to drive at high speed. Speed should be just comfortable.

As far as I remember, we took about 5 hours to reach Belur. In between, we stopped at one dhaba to take breakfast.

Belur was the early capital of the Hoysala Empire. It is located on the banks of River Yagachi. According to inscriptions discovered here, it was also referred to as Velapuri.

The main attraction in Belur is the Chennakesava temple complex, which contains the Chennakesava Temple (dedicated to Chennakeshava , meaning happy Krishna) as the centre piece, surrounded by the Kappe Chennigraya temple built by Shantaladevi, queen of king Vishnuvardhana. She was said to be a noted dancer and on one of the temple's brackets her dancing poses has been sculptured in the most ornate and in exuberant style.The art showcases the intricacy of the hair styles and ormanments during the Hoysala period.

There is a Pushkarni or stepped well to the right side of the main entrance. The Dravida style rayagopuram at the entrance which was a later addition by the Vijayanagar kings, who considered this deity as one of their Kuladevata or family god. 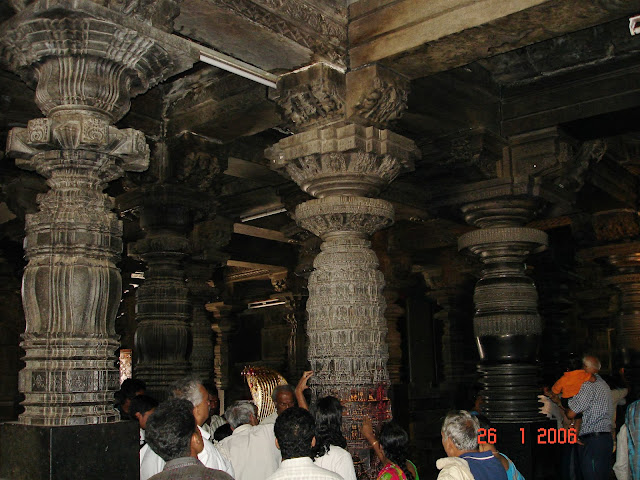 The temple is one of the finest examples of Hoysala architecture. It was built by king Vishnuvardhana in commemoration of his victory over the Cholas at Talakad in 1117 AD. Legend says that it took 103 years to complete and Vishnuvardhana's grandson Veera Ballala II completed the task. The facade of the temple is filled with intricate sculptures and friezes with no portion left blank. The intricate workmanship includes elephants, lions, horses, episodes from the mythological epics, and dancers. Inside the temple are a number of ornate pillars. Darpana Sundari (Lady with the mirror) carved on walls of Belur Temple is one of major attraction in complex.

The temple is about one hundred feet high and has a magnificent gateway tower. The shrines are star-shaped structures. 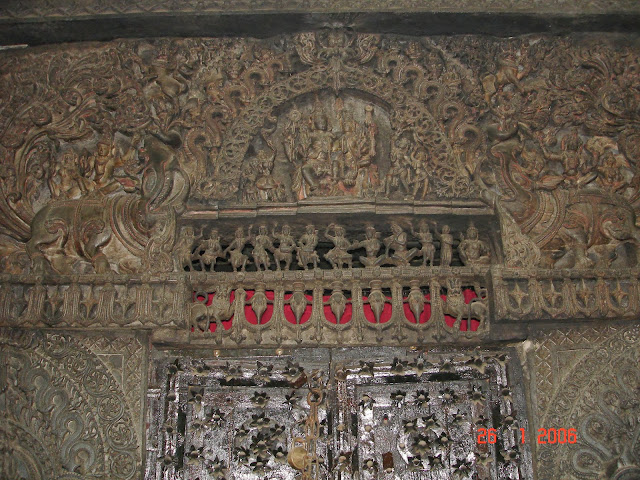 The Hoysala dynasty originally had their capital at halebidu, where they ruled for over 150 years. However, it was attacked by invaders, Malik Kafur, a couple of times during the 14th century, plundered to poverty and ruins. Thus, the Hoysalas shifted their seat of power to Belur which stood proud as a powerful empire back then. 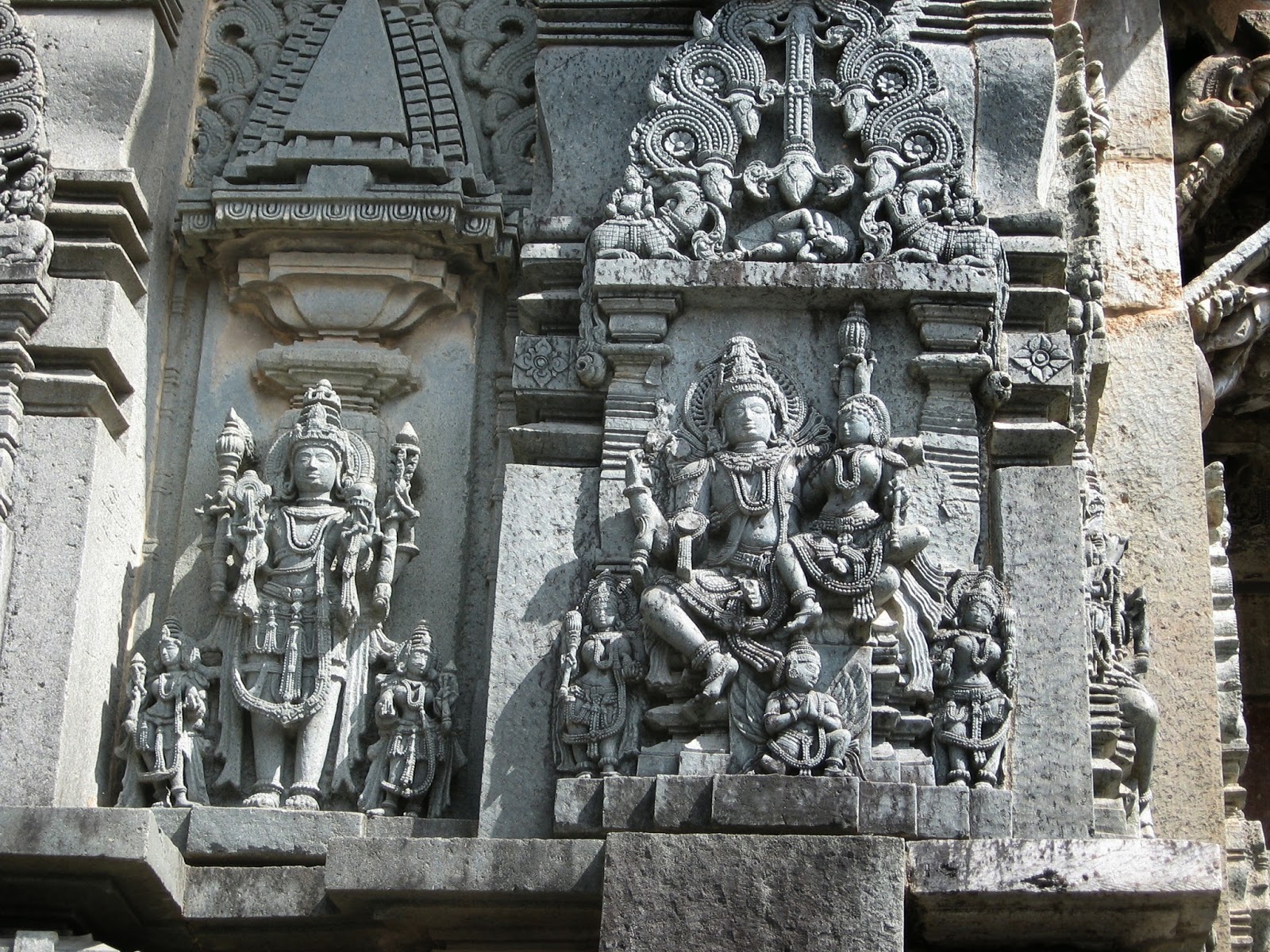 The temple is a holy house for sculptures showcasing innumerable variety of ornaments, the doorways, the ceilings, the birds, the animals, dancers and other figures are fully decorated as if they are full of life and vigour with variety of actions and movements. The doorways are guarded on either side by the gorgeously decorated dvarapalaka (doorkeepers). Stories from the Puranas, Upanishads and other mythological stories have been carved in the most beautiful way. The Ramayana and the Mahabharata also have been included .The bracketed figurines called the Madanikas or celestial nymphs are no doubt the highlight of the temple's magnificent architecture.The Madanikas are said to be inspired by the beautiful Queen Shantaladevi, epitomizing the ideal feminine form. There are about 48 pillars of various sizes, shapes and designs , bearing testimony to remarkable artistry. 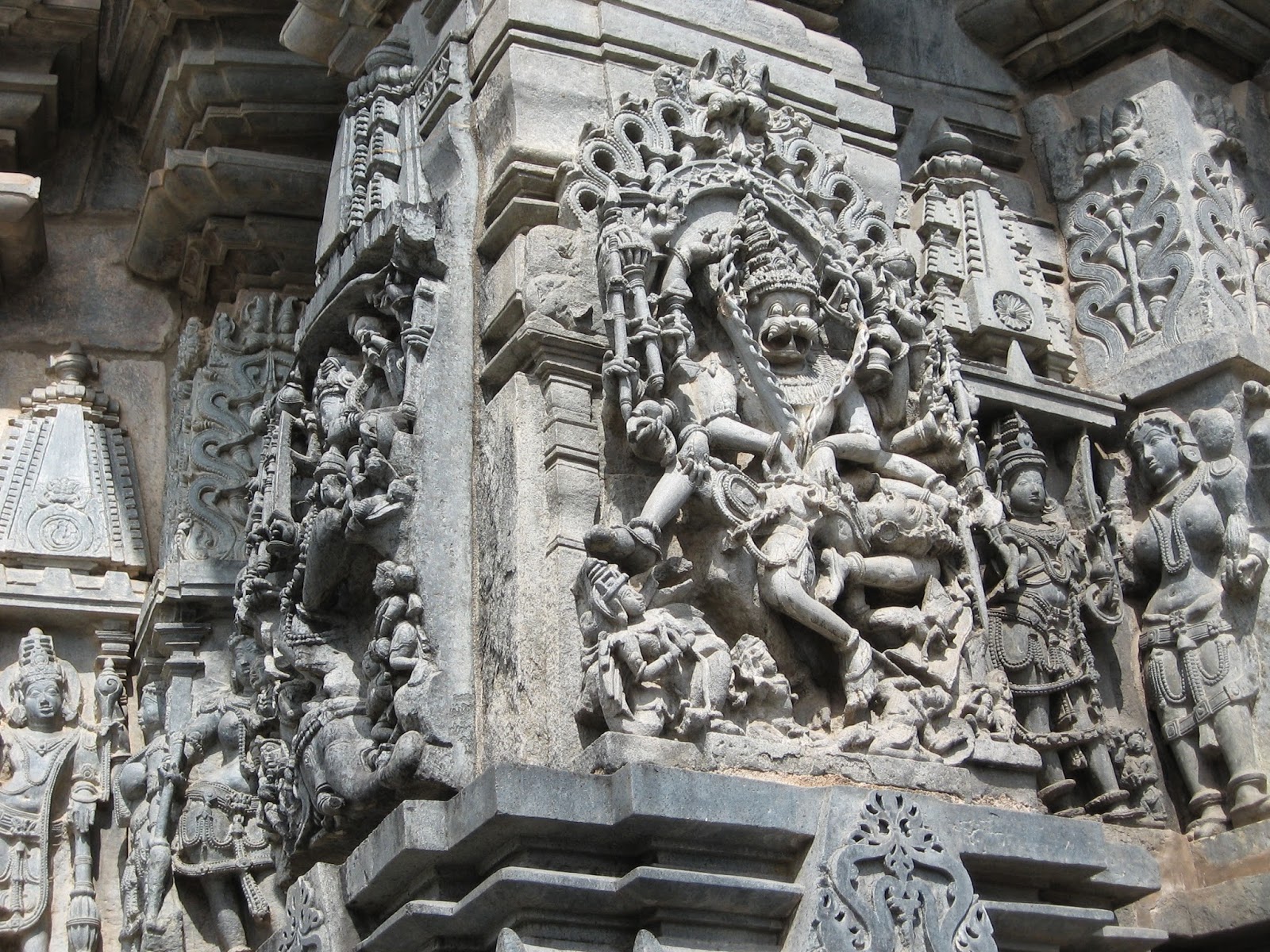 Hoysala sculptors have engraved their names at the foot of their art work. Mallitamma was the most prolific of all known Hoysala artists and it is said that more than forty well-executed sculptures stand in his name.

We took a guide, who explained the things. The sculptures here as well as at halebidu are so beautiful that I think PhDs can be done on these!! 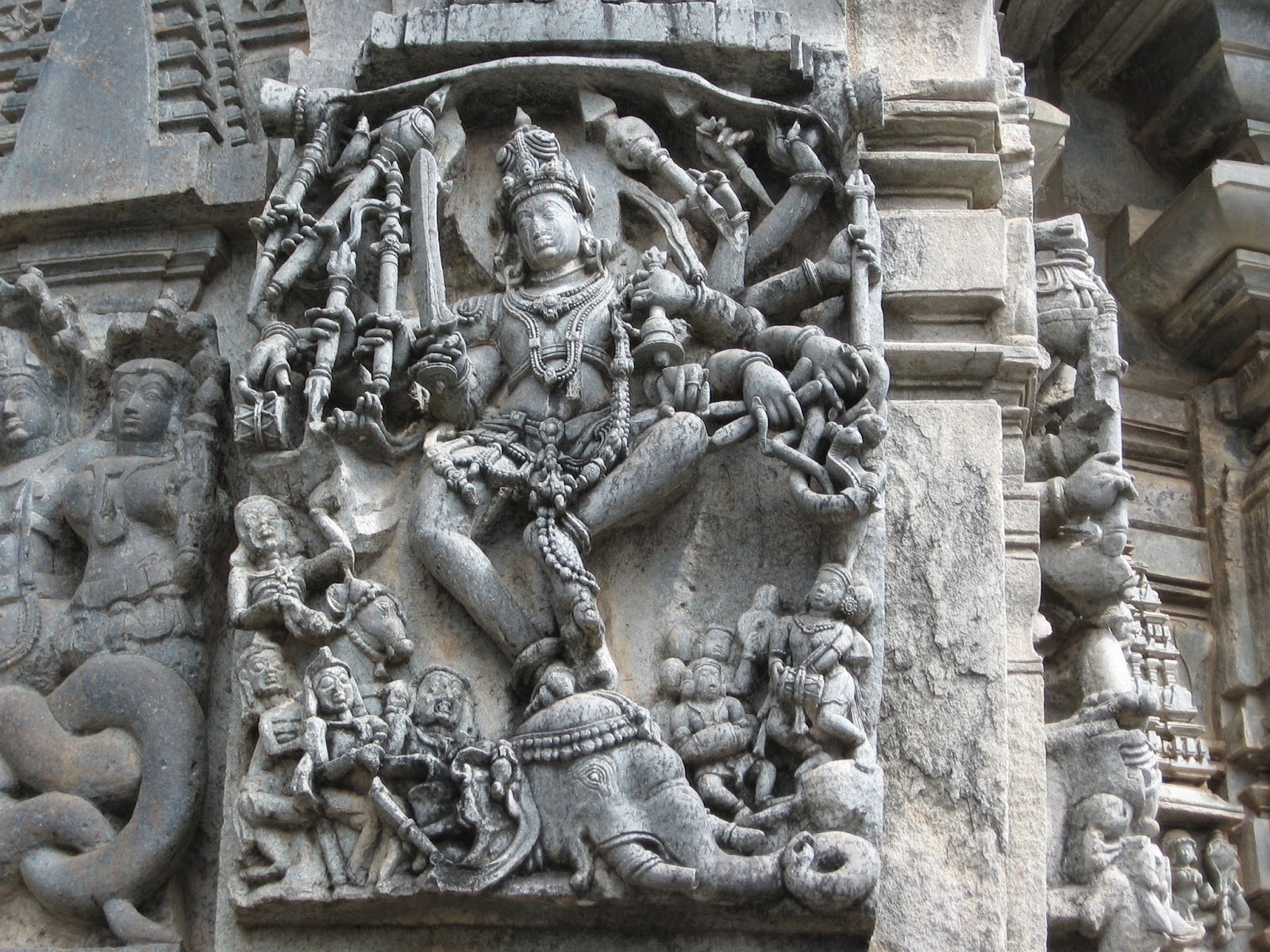 We took lunch at a nearby small restaturent. In my first visit. my old Yashika Camera was giving problem as its film role was got stuck. I went to a photographe shop, who did the needful.

Then we proceeded towards halebidu, which is about 16 KMs from Belur. 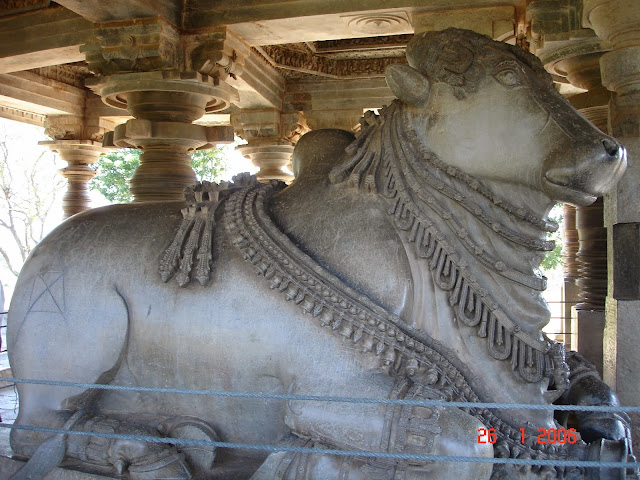 Halebidu, which was previously called Dwarasamudra was the capital of the Hoysala Empire in the 12th century. It is home to one of the best examples of Hoysala architecture in the ornate Hoysaleswara and Kedareswara temples. 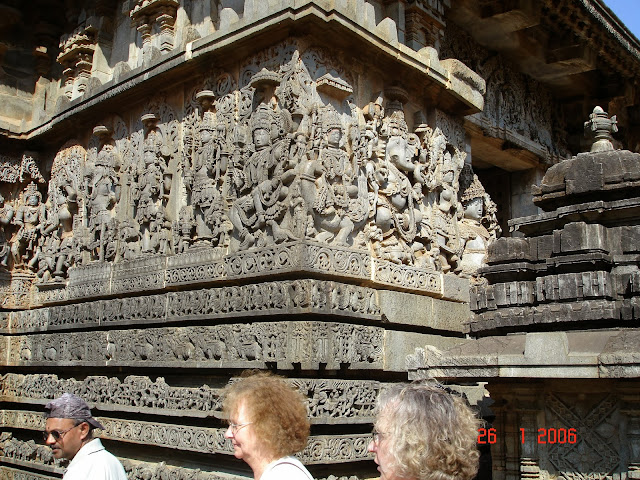 Halebidu is equally magnificent. It was the capital of the Hoysalas till it was destroyed in the early 14th century after attacks by Malik Kafur. The Hoysaleshwara temple survived the pillage but it is said to remain incomplete even after 87 years of uninterrupted construction. The temple is dedicated to Shiva. 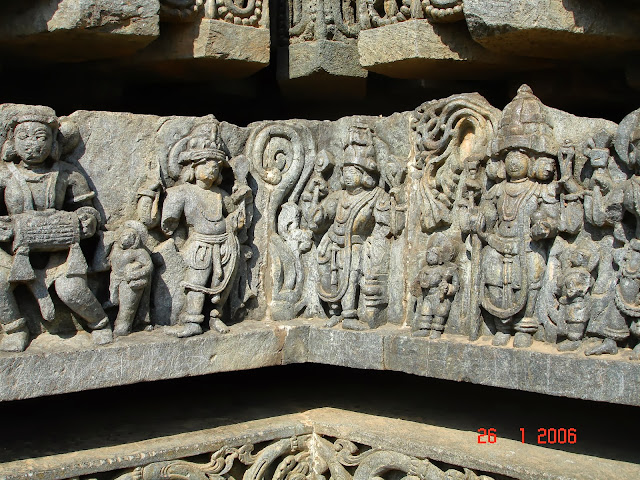 Here also we hired a guide to explain he things. 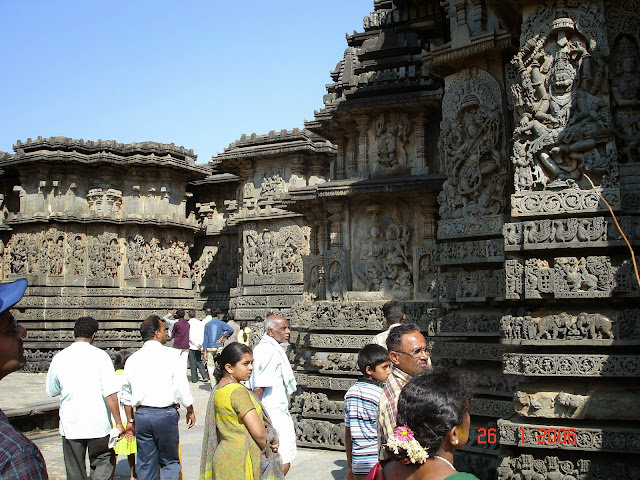 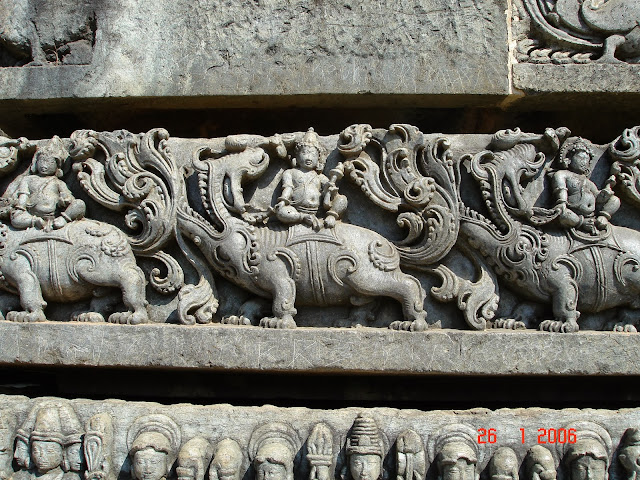 The two nandi bull statues, which are on the side of the Hoysaleshwara temple are monolithic.

The Hoysaleswara temple, dating back to the 1121 AD, is astounding for its wealth of sculptural details. The walls of the temple are covered with an endless variety of depictions from mythology, animals, birds and dancing figures. Yet no two sculptures of the temple are said to be the same. 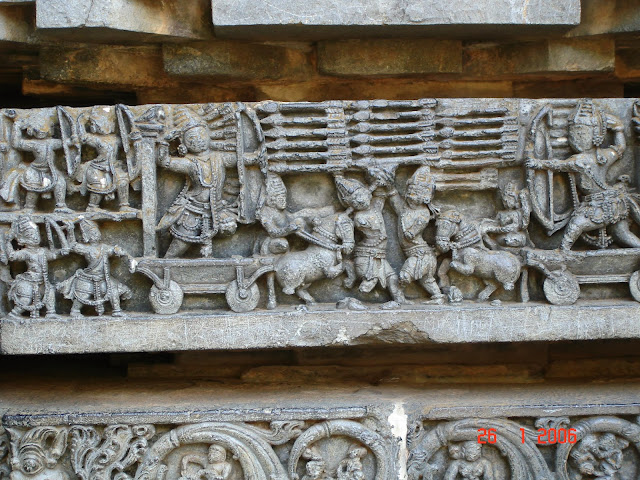 Shantaleswara Temple was built after Shantala Devi, queen of king Vishnuvardhana.It stands on a platform like a casket in shining black soft stone covered with variety of gods and goddesses, animals, birds and dancing girls.

The temple complex also has a Museum on the lawns that showcases 12th century sculptures and gold coins in use at the time.

The temples of Belur and halebidu were made of steatite, a material that is easy to work on, soft initially but hardening after prolonged exposure. 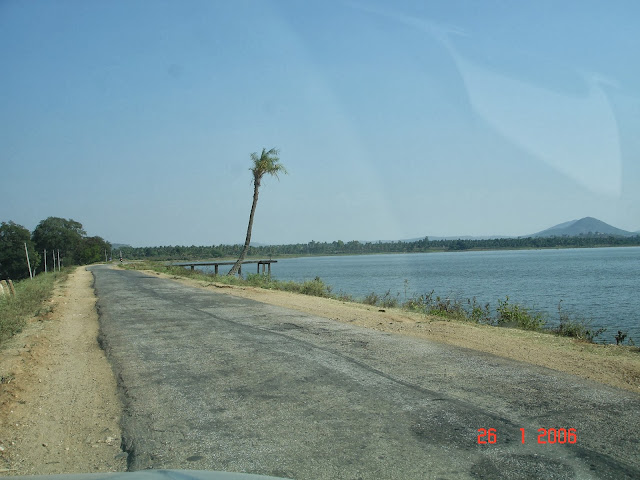 If one wants to visit these places from Bangalore, start early in the morning. I suggest the best time is around 6:00 AM.

The route is quite scenic in between.

We also passed through the ISRO's Satellite Control Facility at Hassan. 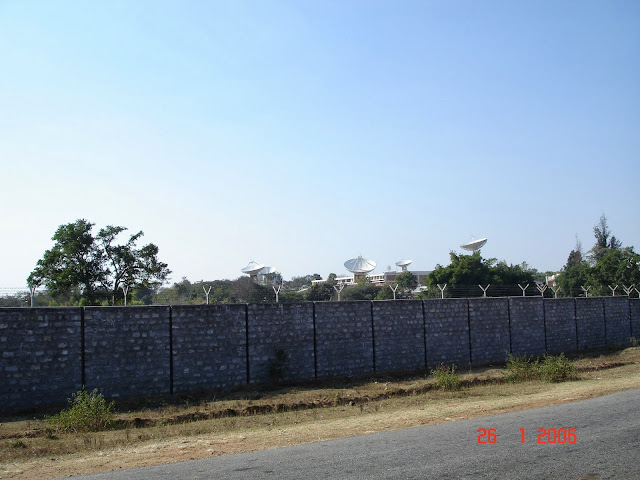 If someone wants to stay, then I suggest Hassan is better place.

The temples at Belur and Halebidu are true testimony of India's rich cultural heritage! But they need more attention and preservation so that coming generations can see these magnificent pieces of art of their ancestors.
Posted by trips of alok at 9:36 PM