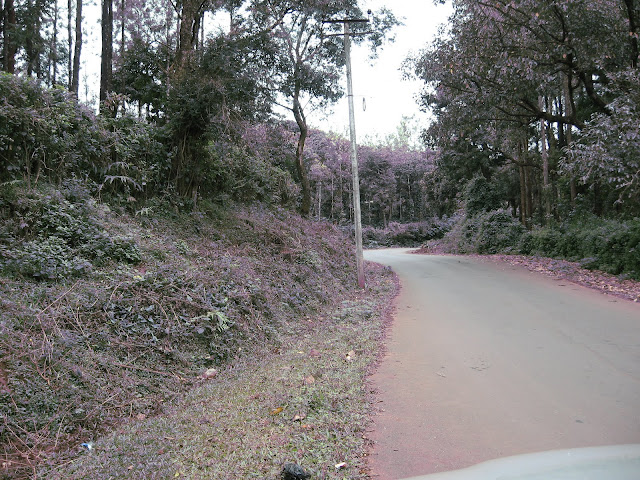 A trip to Chikmagaluru was in my mind since long. Himangshu as well as Saroj had described me about the beautiful hill spots nestled in and around this town.

Rakesh came up this idea as Monday, 01st November was holiday, so we made our plans. Starting on Saturday morning and returning on Monday evening.

I was a little hesitating as previous weekend, I visited Munnar, so was a little tired, but it was a golden oppertunity and hence overcame my mental lethargy.

Though we enquired about a few Homestays as well as Hotels, but this being a long weekend, costs were at quite high side. So we decided to go there and then explore the possibilities.

I have given the title to my this blog as "Chikmagaluru Part 1", because this district has so many beautiful places that I could not cover in one visit. So definetly whenever got chance, will try to visit again to cover Kemmengundi and Kudremukh, where I could not go this time.

Nestled at 3,400ft in the Sahyadri mountains of the Western Ghats, Chikmagalur is situated in the south-western part of Karnataka. It lies at the foothills of the Baba Budan Giri range. Typical of Ghat topography, the town offers unending vistas of mountains, streams, and coffee and pepper plantations. A number of rivers, such as Bhadra, Hemavathi, Tunga, Netravathi and Vedavathi, originate in the hills surrounding the town.

'Gangamoola' is the source of rivers Tunga and Bhadra located near Kudremukha which was famous for its Iron ore deposits. The beautiful waterfalls of Kalhatagiri falls, Hebbe falls, Shanti falls, Manikyadhara falls, Sirimane falls are worth visiting. The Muthodi and Bhadra forests
provide habitat to various species of birds and animals and attract tourists.

The headquarters of the famous 'Coffee Day' is located in Chikmagalur.

The constituency of Chikmagalur in Parliament was once represented by former Prime Minister of India late Indira Gandhi.

It was here that coffee was first cultivated in India in 1670 by Baba Budan, a Muslim saint who brought coffee seeds from Yemen, and after whom the mountain range to the north of the town is named. Later taken up by European planters, coffee production and trade has since been
Chikmagalur's mainstay.

Chickmagalur district was called Kadur district till 1947. A large area of this district is known as Malnad', i.e., a largely forested hilly region of heavy rainfall. Chickmagalur literally means younger daughter's town - Chikka+Magala+Ooru-(in Kannada). It is said to have been given as a dowry to the younger daughter of Rukmangada, the legendary chief of Sakrepatna. Another part of the town bestowed on the elder daughter is known as Hiremagalur. But some old inscriptions reveals that these two places were known as Kiriya-muguli and Piriya-muguli.

From Bangalore, it is about 240 KMs. The nearest airport to this town is Bajpe airport of Mangalore (160 km), and the nearest railway station is Kadur (40 km).

There are two routes from Bangalore, via Nelmangala - Hassan - Belur - Chikmagalur or Via Nelamangala - Tumkur - Arsikere - Chikmagalur.

We took the route via Hassan.

Though it is always good to start early in morning, but with kids it becomes a little difficult.

Rakesh arrived with his Esteem at around 7:45 AM, and in next few minutes, we were on our way.

Weather was cloudy and pleasent. Soon we crossed Nelamangala and took the turn towards Mangalore Highway. Rakesh was behind the wheels. A few months back, the traffic between Yaswantpur - Peenya - Nelamangala used to be quite horrible, but with new toll road, it has been eased.

We stopped briefly at Kunigal for breakfast.

By the time, we reached Chikmagalur, it was evening 4 PM. As we had not done the prior booking, so we had to search one.

Soon we got the pinch, as to whichever good hotel we went, all declined being completely booked. But we got two decent rooms at "Benaka Residency" for just one night.

The first destination Mullahnagiri is about 20 KMs from Chikmagaluru town. The route is through beautiful Coffee plantations and ghats. We stopped many times in between to capture the surrounding beauties in our camera.

At one such spot, we heard a lot of cries from Jackals in the forests downwards. We were in the Tiger Terretory. 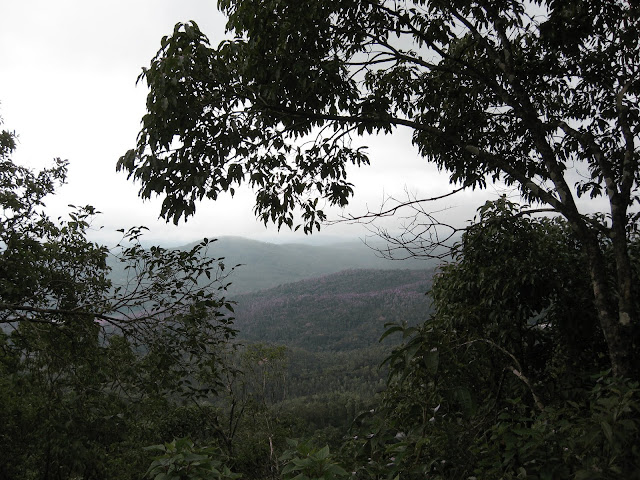 About 8 KMs before Mullahna Giri, the road bifurcates, with One going towards, Baba Budan Giri or Kemmangundi.

We took the turn here for Mullahna Giri.

As we covered distance, roads became quite narrow and steep. Soon we were in clouds.

One has to be very careful, roads are not very wide and quite steep at some places. The 2 KM road from Sithalliahna Giri Muth to Mullahnagiri is quite challenging.

As we gained the hight, weather deteriorated with dense fog and mist. But Rakesh being a experienced driver, was able to manouver things brilliantly.

Mullahnagiri (Mullayangiri/Mullaingiri) is said to be the highest (6317 feet = 1930 meters above MSL) peak in Karnataka and also is the highest peak in the Baba Budan Giri Range.

It is the highest peak in between the Himalayas and the Nilgiris.

The temple of Mullahnagiri Swamy is through some good numbers of steps. But as weather was not good and also with Kids in lap, we decided not to take that.

With clouds roaming freely and the mist, made the things very romantic.

After spending some time there, we started back and soon got caught in a little scary situation.

The road was very narrow, with one side having the steep vally below. A mini bus was coming from other side and soon we were face to face stuck in a jam.

It took us about 30 minutes to plan how to take sides and then move further.

We returned to Sithalliahna Giri Muth and visited the Shiva Temple there. Nearby there is one cave, seems to be quite deep, but I didnot dare go inside.

We descended to the bifurcation, from where one road goes towards Kemmangundi and/or Bab Budan Giri hills. We took that route, though a few people warned us that road is quite bad.

In between we stopped briefly at Honnammana Falls.

As we moved further, the road became even more pathetic, but the cool wind, the misty weather and the heavenly beauty of the surronding hills, made sure that we did not bothered about the route.

Now there was another bifurcation, the one going towards down slope, is towards Kemmengundi and another going upwards was towards Baba Budan Giri (Datta Peeth).

We took the route towards Datta Peetham. 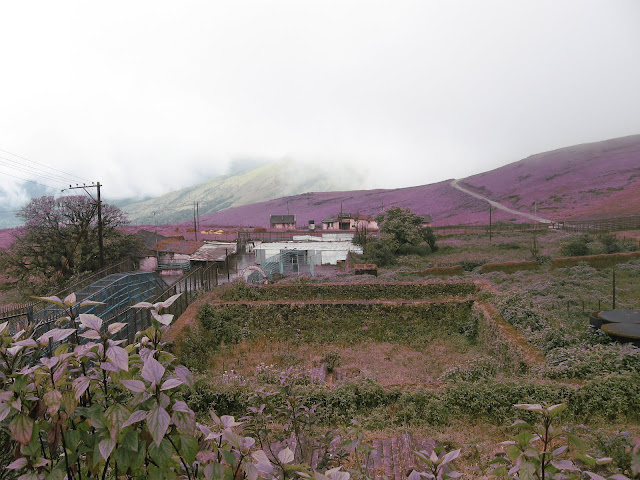 Dattagiri is the location of a small cave shrine devoted to Guru Dattatreya, an incarnation of Shiva. Baba Budan Shah, who brought Coffee for India also said to be lived here and hence this place is place of pilgrimage to both Hindus and Muslims.

When we reached there, the shrine was closed owing to some construction work (as a local person told me). So we paid our respect from a distance and then proceeded towards Manikya Dhara.

Manikya Dhara is a water fall about 4 KMs from Datta Shrine. It is again a very beautiful place, with wonderful views of surroundings. One has to descend about 150 steps down to reach here. Earlier, people after taking bath, used to leave their clothes there as tradition, but now authorities have put restriction on it. 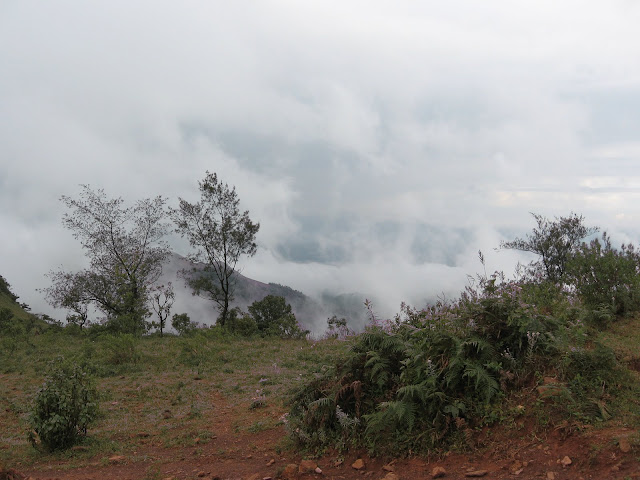 After spending some time in the midst of clouds and these beautiful hills, we started back towards Chikmagaluru. As far as I remember, we were back in Chikmagaluru at around 4 PM.

One has to make sure to carry enough water as well some food items with them. Nothing good is expected enroute except some small shops. People with small kids needs to take special care.

We took our very late lunch at MG Road, Chikmagaluru.

We were badly tired with the day and kids were also exhausted. So we thought of spending another day relaxing at Sakleshpur.

Sakleshpur is a beautiful town located in Western Ghats on Bangalore- Mangalore Highway. The attractions around Sakleshpur include Coffee Estates as well as Manjarabad Fort, constructed by Tippu Sultan.

One more attraction include a trek on the railway track from Sakleshpur to the Subramanya Road Station which is about 56 km dotted by 58 tunnels, 109 bridges and about 25 waterfalls etc. But for this prior permission from Railways are needed and also we need to be quite equipped for this.

Rakesh, through his contacts, managed to get two rooms at Manjeerabad Club. This is a quite old club, established in year 1894. This was very comfortable place to stay and we retired for the night after good dinner.

In the morning after takeing berakfast, we started for Manjarabad Fort, which is about 5 Kms from Sakleshpur towards Mangalore direction. One has to step up about 250 steps to reach this fort.

We also thought of visiting either Dharmasthala (about 72 Kms from Sakleshpur) and/or Kukke Subramanya (about 60 KMs from Sakleshpur), but as we had not planned properly and in advance so we differed this for some other time.

It was very small fort, perhaps only for military significance to check the route between Mysore and Mangalore during 17th century. The fort is in state of very neglect, which pinched me. These places once lost, will never return back.

We returned back after spending some time there and took lunch.

It was about 2 PM, Monday and we started back from Sakleshpur. From Hassan we took road towards Belur to visit the famous and ancient Chenna Keshava Temple.The temple is one of the finest examples of Hoysala architecture. It was built by king Vishnuvardhana in commemoration of his victory over the Cholas at Talakad in 1117 AD. Legend says that it took 103 years to complete and Vishnuvardhana's grandson Veera Ballala II completed the task.

The facade of the temple is filled with intricate sculptures and friezes with no portion left blank. The intricate workmanship includes elephants, lions, horses, episodes from the mythological epics, and dancers. Inside the temple are a number of ornate pillars. Darpana Sundari
(Lady with the mirror) carved on walls of Belur Temple is one of major attraction in complex.

For more details, please have a look at my blog on Belur and Halebidu.

It was around 5 PM, that we started back from Belur towards Bangalore. We stopped to take Tea at Hassan at around 6 PM and then again at Kunigal at around 9 PM.

As we approached Bangalore, it started raining heavily, but we continued slowly, reaching home at around 11:30 PM.