He is said to be incarnation of Lord Shiva and Shri Shirdi Sai Baba.
I had visited once his ashram at Whitefield at Bangalore and was blessed to get his Darshan there.
After Bhagwan Shri Sathya Sai Baba took Samadhi, I had the wish to visit his blissful abode and with blessings of him, I got this oppertunity on Saturday, 17th of September.
Chandan accompanied us for this trip.
Puttaparthy or Puttaparthi is a small town situated in the Anantapur district of Andhra Pradesh. It is well connected by road to Hyderabad (472 km), Chennai (375 km), and Bangalore (160 km). The nearest Railway station is Dharmavaram (about 30 Kms). Puttaparthi has its own airport as well.
We started from Bangalore by Car at around 7 AM. The route is via Hyderabad highway through Bangalore International Airport, Devanhalli - Chikballapur - karnatka AP Border and the the toll booth. A few KMs from here, we got the sign board about the Puttaparthi and needed to take right turn. Puttaparthi was about 35-40 Kms from there.
As a modest driver, I took about 3-1/2 hours to cover this distance.
Please respect the highway and dont treat your vehicle as an aircraft!!
Near Devanhalli and a bit after that near Chikballapur, there are a few road bumps, I dont know why they are there at highway. One needs to be careful.
Road is good. Even the state road that goes from NH7 towards Puttaparthi is also quite descent. As it passes through the rural area, one has to mind the vehicle speed.
I saw a snake crossing the road, as I moved on.
By around 10:30 AM, we were at Puttaparthi. As we inched closer to Puttaparthi, we passed through the airport and then the world famous medical institute and then the town.
Bhagwan Shri Sai Baba asended on this planet on November 23, 1926 at this village. This village was then called Gollapalli.
Baba took birth as Satyanarayana Raju, the fourth child of Eswaramma and Pedda Venkappa Raju. It is said that, a snake apparently appeared and shielded the infant, and musical instruments in the house started playing of their own accord!
Satyanarayana Raju appears to have been an exceptional child on all counts. His gentleness and compassion were legendary in the village. He liberally distributed food and clothes to the needy. With his powers, every kind of fruit appeared on the tamarind tree that can still be seen on the hill near Puttaparthi. This place is now famous as "Kalpa Vriksha".


Distrurbed by the mystic behaviour of their son, his parents took him to a local witch doctor, who perpetrated various painful bodily procedures on the young boy to drive the "evil spirit" away. But it was to no avail. At the age of 13, on May 28, 1940, Satyanarana materialised some sweets and flowers, distributed them among his family members, and made his famous declaration, "I am Sai Baba".
On October 20, 1940, Satyanarayana apparently threw away his schoolbooks, left his house, seated himself on a rock, and burst into the now well-known Sai bhajan, "Manasa bhajare guru charanam dustara bhava sagara charanam".
Prasanti Nilayam was inaugurated on November 23, 1950, the twenty-fourth birthday of Bhagavan Sri Sathya Sai Baba. Sathya Sai Baba can be said to be the architect and engineer, who directed the entire work for construction.
Sai Kulwant Hall is where daily darshan took place. It is a spacious enclosure, which now has the samadhi of Baba. It is located between Sathya Sai Baba's residence (Yajur Mandir) and the Prasanti Mandir. The carved icons of Sri Rama, Sita, Lakshmana and Hanuman were blessed by Sathya Sai Baba on 30 September 1999. 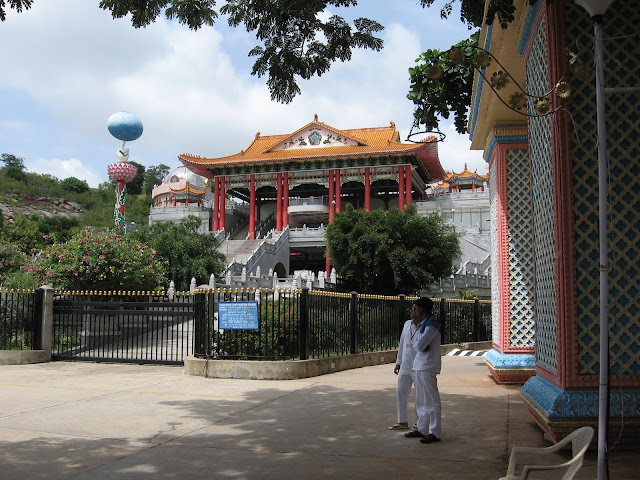 Our first place of visit was Chaitanya Jyoti, a world-religions museum.It has teachings of all religions. A wonderful place to be. Excellent arhitecture and ambience. It has strict timings, as far as I remember now, morning 9 till 11:30 AM and then from 3 till 6 PM. 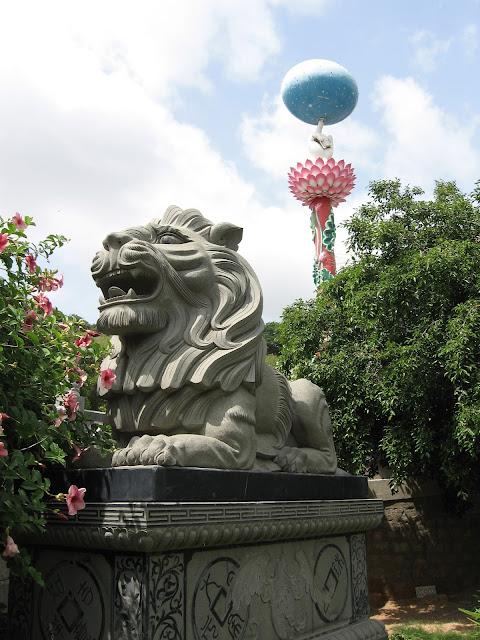 Then we went to Prasanti Nilayam. This is the township, where that the Ashram is located.
There is problem of parking space in Puttaparthi. Initially I parked my Car in front of Chaitanya Jyoti and then later near the gates of Prasanti Nilayam, opposite the bus stand.
There is an air of serenity at the Ashram and the strict discipline maintained by the volunteers.

Certain guidelines and codes of conduct have been laid down for devotees, while in the ashram. Devotees are supposed to be dressed in modest, clean and sober clothing at all times.Females are expected to be in "Salwar Kurta" or Sarees, with shoulders covered.


As we entered the ashram, the first thing, that we saw was Ganesha Temple, which is said to be the most popular shrine in the place, besides the Baba Samadhi.
Sai Kulwant Hall is just close to it. This vast enclosure can accommodate over 20,000 devotees at a time. The white-domed, multi-coloured two-storeyed sanctum contains the prayer hall on the ground floor, and a few rooms flanked by a balcony on the second.
As it was noon time and so the samadhi was closed. We sat nearby for some time and then proceeded towards the Ashram Canteen for lunch. There are different canteens for North and South Indian as well as Western type of food. There are different rooms for men and women, and this discipline is strictly followed.
As now it was around 2 PM, so we thought to visit nearby places, associated with Baba.
Hard bargain is required with Auto drivers. There will ask for Rs 300/- but after some bargain they will get ready for Rs 100/-
There are a lot of volunteers at Puttaparthi. One can get help and guidance from them. 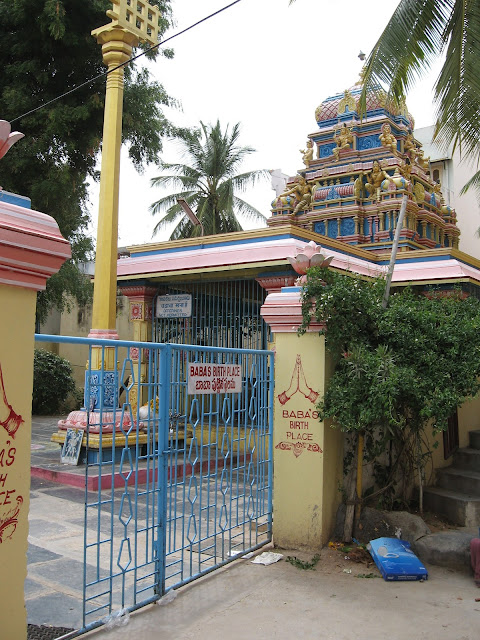 First we went to Baba's Birth Place. This is a small Shiva temple and was inaugurated by Baba in 1979. Since he was born on Karthika Somvara (a day associated with Shiva worship), the shrine was dedicated to Lord Shiva.
Nearby is the Satyabhama Temple. This temple is dedicated to Satyabhama, consort of Krishna and was constructed by Baba's grandfather, Kondama Raju. This was in response to a dream in which Kondama Raju saw Satyabhama in distress in a storm (having sent Krishna away to pluck flowers for her) and beseeching him for his protection. It is more famous as "Satyamma Temple"
Next to Satyamma temple is a temple dedicated to Krishna or Venugopala. In old days, Gollapalli (Puttaparthi's earlier name) was a prosperous village of cowherds at one time. However one incensed cowherd hurled a stone at a cobra that was sucking milk from the udder of one of his cows. The dying cobra
cursed the village, and as a result, the cattle began to perish, and the place was infested with ant-hills. Its name was now changed to Valmikipura (the word 'Valmiki' denoting 'anthill' in Sanskrit, and Puttaparthi being the Telugu equivalent of the same).

In an attempt to appease the spirit of the dead snake, the villagers installed the blood-splattered stone in a shrine and started worshipping it. Sathya Sai Baba instructed them to wash it and smear it with sandal paste. On doing this, the outline of the figure of Krishna (or Venugopala) holding his customary flute, became discernible. The temple was now called the Venugopalaswamy temple, and the curse on the village of Puttaparthi came to an end. 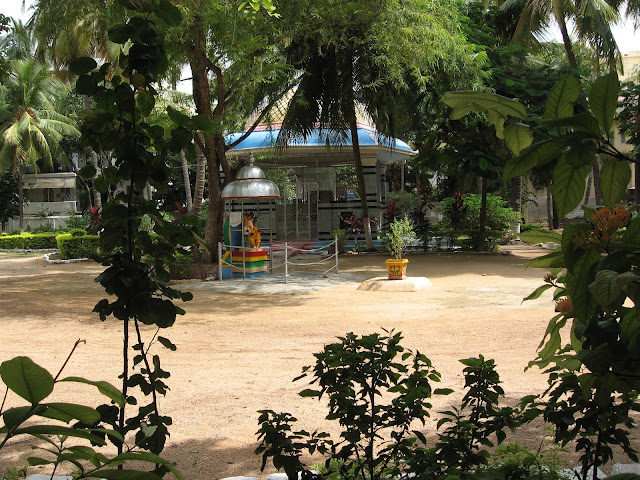 Then we went to pay homage to Samadhi of Baba's Parents. It is built of black stone and is situated off the main street. At that noon time it was closed and opens at 4:30 PM. So we paid our respect and asked for blessings from the gates. 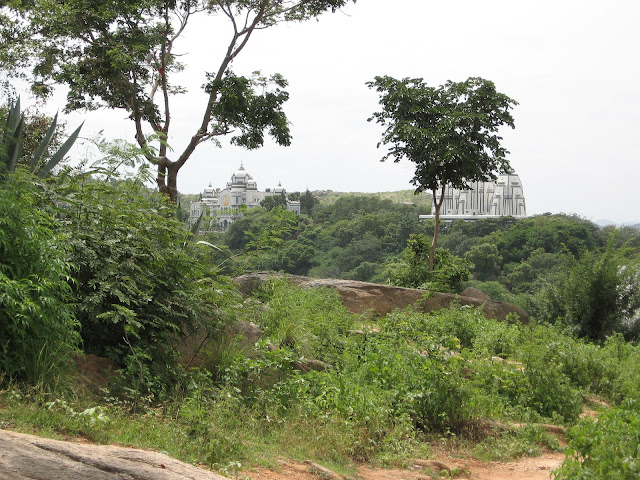 A little further near the banks of Chitravathi river is "Kalpa Vruksha". It is believed that as a young boy, Baba materialised a variety of fruit on this tamarind tree. This gave it the name of kalpa vruksha or wish-fulfilling tree.
There are about 150 steps to be ascended to reach here. The surrounding view of hills and Puttaparthi town is stunning from here. 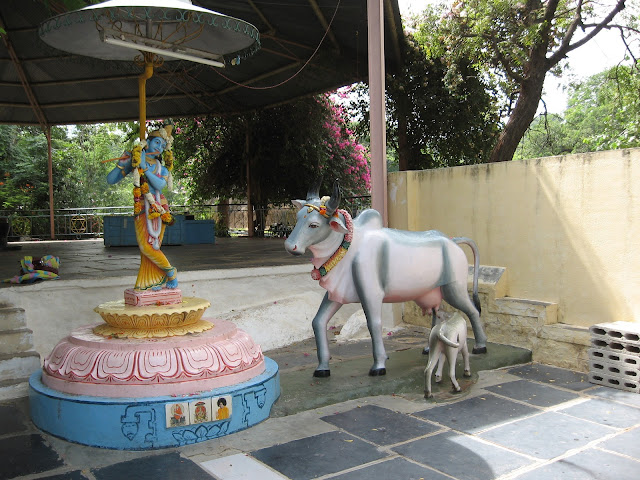 Our last stop before visiting Mahasamadhi was Gokulam. This is a cow shed, where a lot of cows are there. They are the source of milk to the ashram. We spend some peaceful moments there.
We returned back to Ashram. The timings for Samadhi Darshan is 9:30 to 11 AM and then 6 PM onwards.The prayers start at 8 AM and 4:30 PM respectively in morning and evening at the Sai Kulwant Hall. After the prayer, one can go near the samadhi and pray. There are seperate queue and entrance for men and women.

The aura, the grace and the blessings of Sai are there...just close your eyes and you will feel he touching your head and blessing you, assuring you, not to get worried for anything...when I am with you!!
Getting blessed by the darshan of Maha Samadhi, we started back for Bangalore. It was around 7 PM.
We were back to home by around 10:30 PM.
In total, we drove about 321 KMs.
If someone starts early in morning from Bangalore, say around 6 AM, then first he should visit Mahasamadhi and then other places. In this way, one can visit all shrines by noon and so comfortably he/she can return bangalore in day time itself.
Posted by trips of alok at 12:28 PM