I got the oppertunity to be in Jhansi for a day during third week of April, 2013.

It was just a one day stay there and so there was not enough time to roam across the vast geography of Bundelkhand. But still I was able to have short visit to Shri Piambara Peeth, Datia and Orchha.

The plan was to visit Shri Pitambara Peeth at Datia (in MP) in morning and then the town of Orchha in evening.

Summer months are severe in Jhansi (and Bundelkhand) so someone who is planning to visit this area should keep this in mind while planning.

The Pitambara Peeth is located in Datia town of Madhya Pradesh and is about 30 KMs from Jhansi.

We started at arond 720 AM from Jhansi. The road was not good. Though I had the luxury of AC Innova, still the bad roads showed their strength by making sure that vehicle speed remains low.

Shri Pitambra Peeth is a complex of temples at Datia town in MP. It was, according to many legends 'Tapasthali' (place of meditation) of many saints.

Datia derived its name from DantaVakra, a King of "Karusha" tribe, who ruled this area during Mahabharat times. He was an ally of King Jarasandha of Magadh. After Jarasandh was killed he became enemy of Pandavas and Krishna. Though later his kingdom fought the Mahabharat war alongside with Pandavas.

We reached Datia at around 8 AM and went straight to the Pitambara Peeth.

Pitambar Peeth has two shrines of the aspects of "Das-Mahavidya", (the ten aspects of divine mother), Dhumavati and Baaglamukhi. It is one of the most famous Shakti Peetha of Mother Goddess Baglamukhi, which was established by Anant Shri Swami Ji Maharaj in 1920s. He also established the temple of goddess Dhumavati within the ashram. Dhumavati and Baglamukhi are the two of the ten Mahavidyas. In addition to these, there are temples of Parshuram, Hanuman, Kal Bhairav etc.

The temples of Dhumavati Devi opens only for "Aarti" in morning and evening and remains closed during other times.

Married women are not allowed to go inside temple of Dhumavati Devi or to see the divine mother. This is perhaps because the Dhumavati is supposed to be an fierece form of divine mother.

Mahavidyas (Great Wisdoms) or Dasha-Mahavidyas are representations of the ten aspects of the Divine Mother.

These are as below:

1.Kaali – The ultimate form of Brahman, "Devourer of Time"
2.Tara – The Goddess as Guide and Protector, or Who Saves.Who offers the ultimate knowledge which gives salvation
3.Tripura Sundari (Shodashi) – The Goddess Who is "Beautiful in the Three Worlds" (Supreme Deity who fulfills the desires)
4.Bhuvaneshvari – The Goddess as World Mother, or Whose Body is the Cosmos
5.Bhairavi – The Fierce Goddess
6.Chhinnamasta – The self-decapitated Goddess
7.Dhumavati –  Goddess of death, who emanates smoke
8.Bagalamukhi – The Goddess Who Paralyzes Enemies
9.Matangi – the Prime Minister of Lalita (in Srikula systems); the "Tantric Saraswati"
10.Kamala – The Lotus Goddess; the "Tantric Lakshmi"

These ten Mahavidya are also associated with the ten Avatars of Vishnu, and said to be the source from which the avatars of Vishnu arose. All ten forms of the Goddess, are worshiped as the universal Mother.

A legend from the Shaktisamgama-Tantra describes that Sati commits suicide by jumping in Daksha's yagna and Dhumavati rises with a blackened face from the sad smoke of Sati's burning body. She is "all that is left of Sati" and is her outraged avatar.

Another legend tells that Dhumavati was created by the warrior goddess Durga in the battle against demons Shumbha and Nishumbha. Dhumavati's literal name ("she who abides in smoke") comes from her ability to defeat demons by creating stinging smoke.

(God is Infinite so does its manifestations, these infinite manifstations are described by saints through infinite stories)

Temple was open but the gate was covered with curtain. Inside the priests were doing Pooja with incense. Once they were done the curtain was removed for public to have the darshan.

With folded hands we bowed down to the latent energy of the being.

Dhumavati symbolises the restless energy in us. It is restless till it gets diverted towards the Lord. This energy without a direction is aimless and can be directed for noth fruiful of destructive purposes. If we are able to divert this energy towards calmness of mind, we will be enlightened, if we divert this towards merry-making, destiny is bound to be doomed.

Dhumavati is the grandmother spirit , the great teacher who bestows the ultimate lessons of birth and death that come through hard experience.

With prayer and Saadhna, Dhumavati channelises our energies towards enlightenment.

Nearby is the temple of Lord Parashuram. We went there as well and paid our obeisance.

Then we went towards other section of the temple complex. There is an ancient Shiva Linga here known as Van-Khandeshwar Mahadev. (The Lord of the Forest Land).

The shivlingam of shree Vankhandeswar Shiva is found out by the Archeological Survey of India to be of the same age as that of the Mahabharata.

Glory to the Lord of Lords!

Nearby are the temples of Baglamukhi and the samadhi of Swamyji. Pujyapaad Swamyji was a strong devotee of the Goddess Pitambara.

Goddess Bagalamukhi is also known as Pitambara Maa. Once upon a time, a huge storm erupted over the Earth. As it threatened to destroy whole of the creation, all the Gods assembled in the Saurashtra region. Goddess Bagalamukhi emerged from the 'Haridra Sarovara', and appeased by the prayers of the gods, calmed down the storm.

Another story goes on to explain that a demon named Madan underwent penance and won the boon of vak siddhi, according to which whatever he said, happened the exact way. Starting to take his boon as a point to harass innocent people, the heavenly livings were severely enraged, thereby worshipping Bagalamukhi. She stopped the demon`s rampage by gripping his tongue and silencing his speech forever. However, before she could kill him, he requested her that he is worshipped alongside the goddess, and she yielded. That is why Madan (the demon) is shown with her together.

She represents the stunning radiance that comes from her Divine presence (word) and puts all human or egoistic worlds (word) to rest..she gives the power of speech that leaves others silent and grasping for words.

We prayed the mother and getting blessed moved out of temple. This place is said to be very famous among politicians too. They come here to pray to mother to get success in elections or to come out clean from scams. The mother is very merciful. She always listnes to the crying heart!

Another 40 minutes and we were back in Jhansi.

Evening we started for the town of Orchha. It is in TikamGarh district of MP, about 18 Kms from Jhansi.

The Orchha town was established by Maharaja Rudra Pratap Singh in 1501 AD, on the banks of Betwa River. He also constructed Orchha palace, which has been surrounded by a moat wall. This fort consists of several buildingsincluding Raja Mahal and the Jahangir Mahal.

Raja Mahal is the place where the King used to summon his court and Jahangir Mahal was constructed to honour the visit of Mughal Emperor here.

Orchha is most famous for Numerous Cenotaphs or "Chhatri" mostly on the banks of Betwa river. These were erected to immortalize the rememberance of the great sons and daughters of this land. 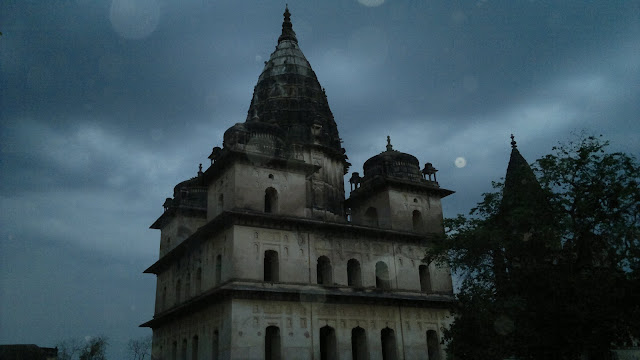 We went to the banks of Betwa, where there a lot of "Chhatri" constructed. One thing which is visible very much is neglect of there monuments. These magnificent tokens of mideavel times, today stand neglected or frequented by wasps. bees or perhaps may be unsocial elements.

The banks of Betwa here are dotted with these "Chhatri" and tombs. But all are now in neglected state.

It was evening now, so time to go to fort. We had plans to view the "Light and Sound" show there. 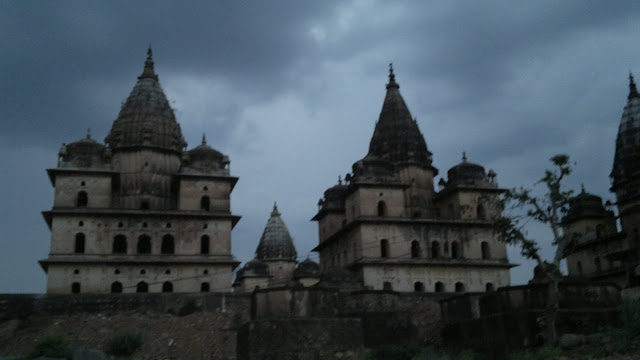 It started drizzling a bit, so I thought, we may miss it, but the benevolent Lord Indra, helped us to enjoy the show.This was the first time, that I witnessed a light and sound show. It was just amazing. It started from the beginning of the origin of Orchha till it was forgotten as the nearby town of Jhansi gained prominence.

The show narrated the rise of Orchha under Rudra Pratap Singh and Madhukar Shah. The valour of Chhatrasal and the greatness of young Hardaul. 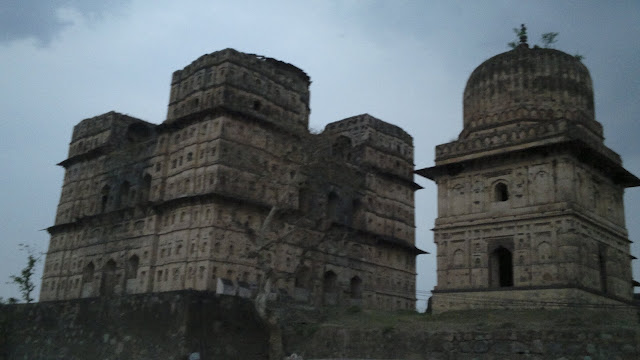 This one hour show took all of us to mideavel times, except a few bites of mosquitos made sure that we knew we are in 21st century.

Infront of the Fort is the Raja Ram Temple. This was earlier known as "Rani Mahal" or the Palace of the Queen. It is said the King Madhukar Shah, a great devotee of Krishna, insisted his queen to accompany him to Vrindavan. But the Queen, a devotee of Raam, insisted to go to Ayodhya. The disapponited king refused to accompany her and asked her to return back to Orccha, only if Ram accompanies her.

The Queen did tough penance at Ayodhya but could not realise the Lord. Finally a bit disappointed, she jumped in Sarayu river to end her life. The blissful and merciful Lord saved her and bring her out of waters. Delighted, she insisted Lord to accompany her to Orchha. He agreed but on condition that, wherever he will be installed, he will remain there. After the Queen returned back, as a new temple was not ready, the Queen kept the Idol in the Kitchen. After that when the Lord was tried to be removed from that place, it could not happen. The queen remembered the wish of Lord.

Since then the Lord is there, delighting his devotees.

That Palace of Queen is now known as Raja Ram Temple.

We visited the temple, which is quite well maintained and paid our reverence to the Lord.

Nearby is the Chaturbhuj Temple. Perhaps this was being constructed for the Lord Ram, But as the Lord decided to be in the kitchen of the Palace of Queen, it is in state of neglect now (as many other historical buildings in Orchha).

Overall, excepet a section of fort and the Raja Ram Temple, all other monuments are in state of neglect.

Not sure, if concerned authorities are hearing??

We returned back to Jhansi, it was a bit late now. Morning we had train to Lucknow.

Thus ended an excellent day in the Land of Bundelkhand. Glories to Raja Ram, he will grant me many such oppertunities to explore this land!
Posted by trips of alok at 5:25 PM