Bangalore is home to many beautiful temples and also blessed with bounties of nature.

There is a Big Banyan Tree (Ficus Bengalensis) at Ramohalli village off Bangalore Mysore road, which is said to be more than 400 years old and is spread across 3 acres.

I had visited this place with friend Pundareeka many years back, perhaps in 2004. So was planning another trip, this time with kids.

Brother Vineet was visiting Bangalore during weekend of 24/25 May, so when he was here this idea came to visit this place again.

The plan was to visit Shri Raj Rajeshwari Temple, The Big Banyan Tree and if possible, Manchin Bele Dam.

The Raja Rajeshwari Temple is on Bangalore Mysore Highway near Kengeri. We need to take a left turn from the beautiful entrance arch. The temple is about one KM from this arch. At BSNL office, took right turn and we were there at this beautiful and blissful place of worship and meditation.

His Holiness Sri Tiruchi Swamigal (also known as Shivaratnapuri Swamiji) established the temple here. The Seer chosen this place to built his ashram because it was believed that Sage Athreya and his wife Anusuya lived at this place. Today, that remote village of Kenchanalli has been tuned out as one of the posh localities of Bangalore, Raj Rajeshwari Nagar.

We had visited this temple many times to get blessings of divine mother. Though this visit is after quite some time.

The temple of Raja Rajeshwari has been constructed in Dravidian style of architecture (Agama Shastra). The huge Gopuram (entrance tower) is still under construction and expected to be compete soon.

Before we enter the main complex, there is a sanctum of "Shri Chakreshwari".

We went into the temple and bowed to the mother.

Next we entered into the main temple complex and to the main sanctum.

Very peaceful and blissful environment prevailed. Silently praying to the Origin of universe and time, we moved in queue.

It is always blissful to be in proximity to mother. Though She is always with us, but we don't realize this as getting indulged in worldly affairs always!

Time was now to move to The Big Banyan Tree.

It is a few KMs further on Mysore road.

At Ramohalli cross, we took right turn to go to the Big Banyan tree. This turn, that we took from Mysore road is just next to "Raj Rajeshwari Dental College" which is on our right side.

Further drive of about 8 KMs took us to this giant tree! 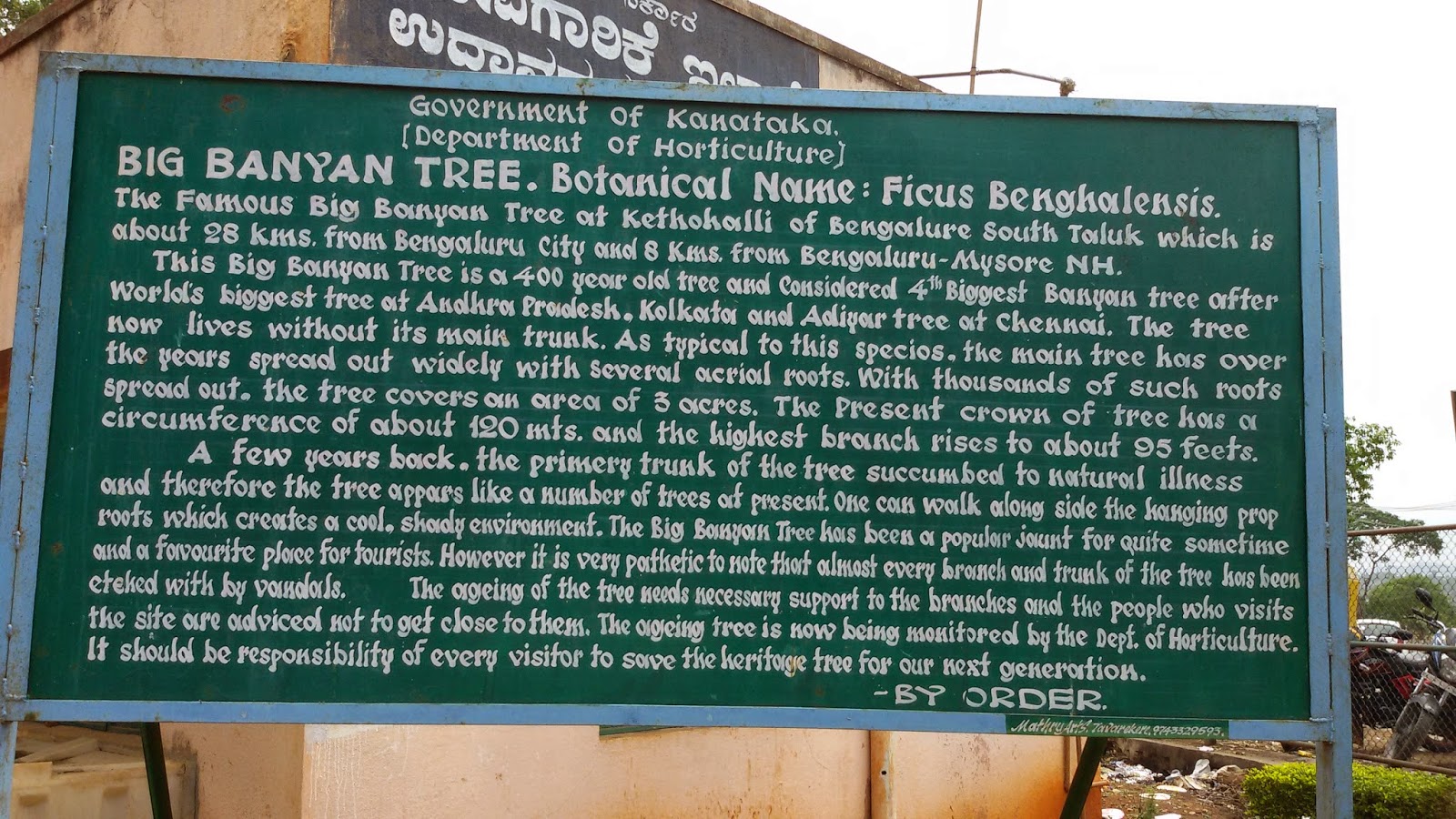 In Kannada, The Big Banyan Tree is known as "Dodda Alada Mara"

Dodda Alada Mara is a giant 400 year old Banyan tree, which is located in the village of Kettohalli. This single plant covers almost 3 acres and is one of the largest of its kind. It has more than a thousand aerial roots. In the 2000s, the main root of the tree succumbed to natural disease, and thus the tree now looks like many different trees. 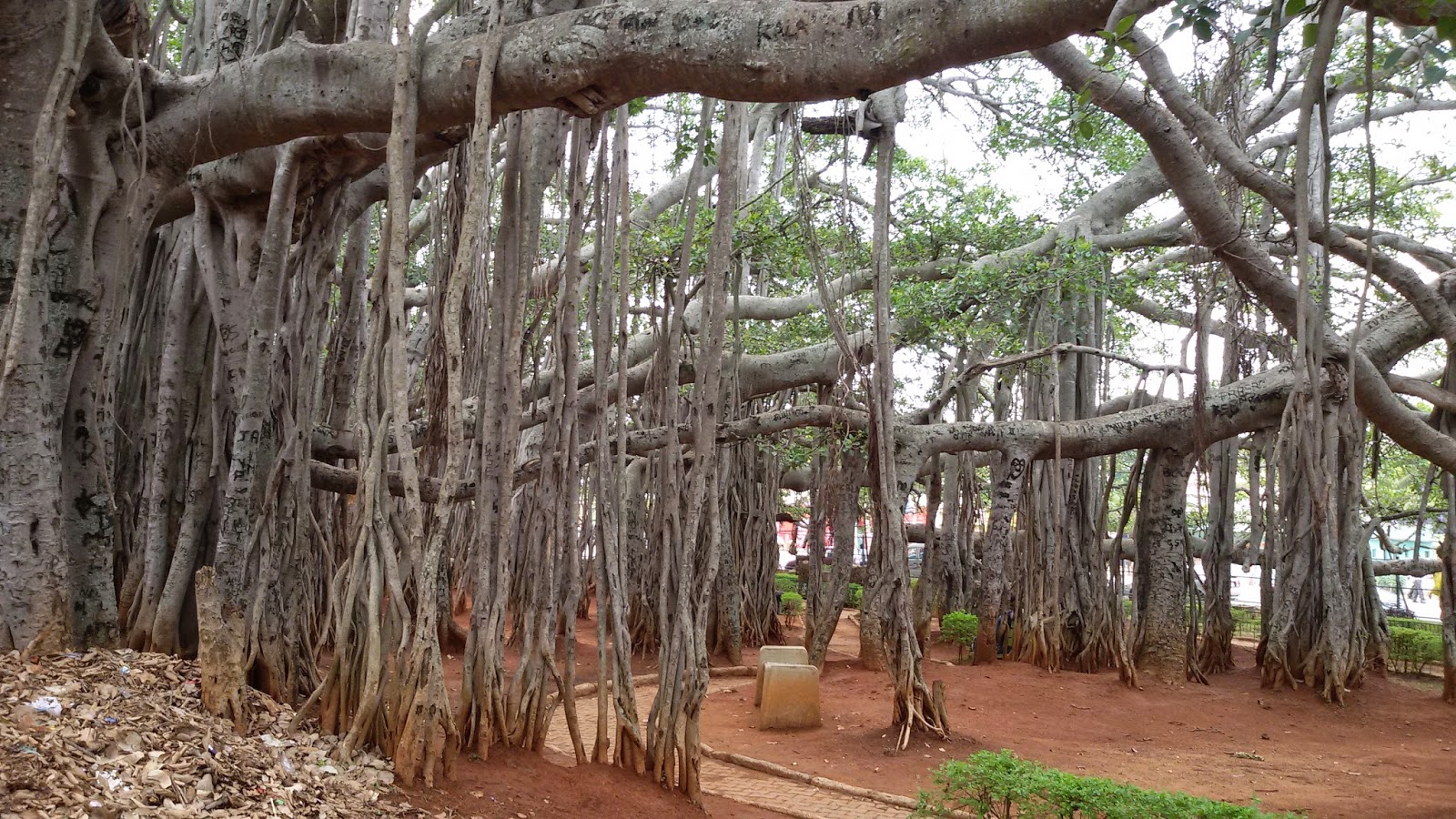 It is just magnificent. So huge tree. Its difficult to realize initially that its only one tree. It looks like more a group of trees!

I remember, My father had bought a poster when I was very young...

"Like a Tree, we all must find space to grow and branch out"

The tree mentioned in above quoute must be a a tree like Dodda Alada Mara! 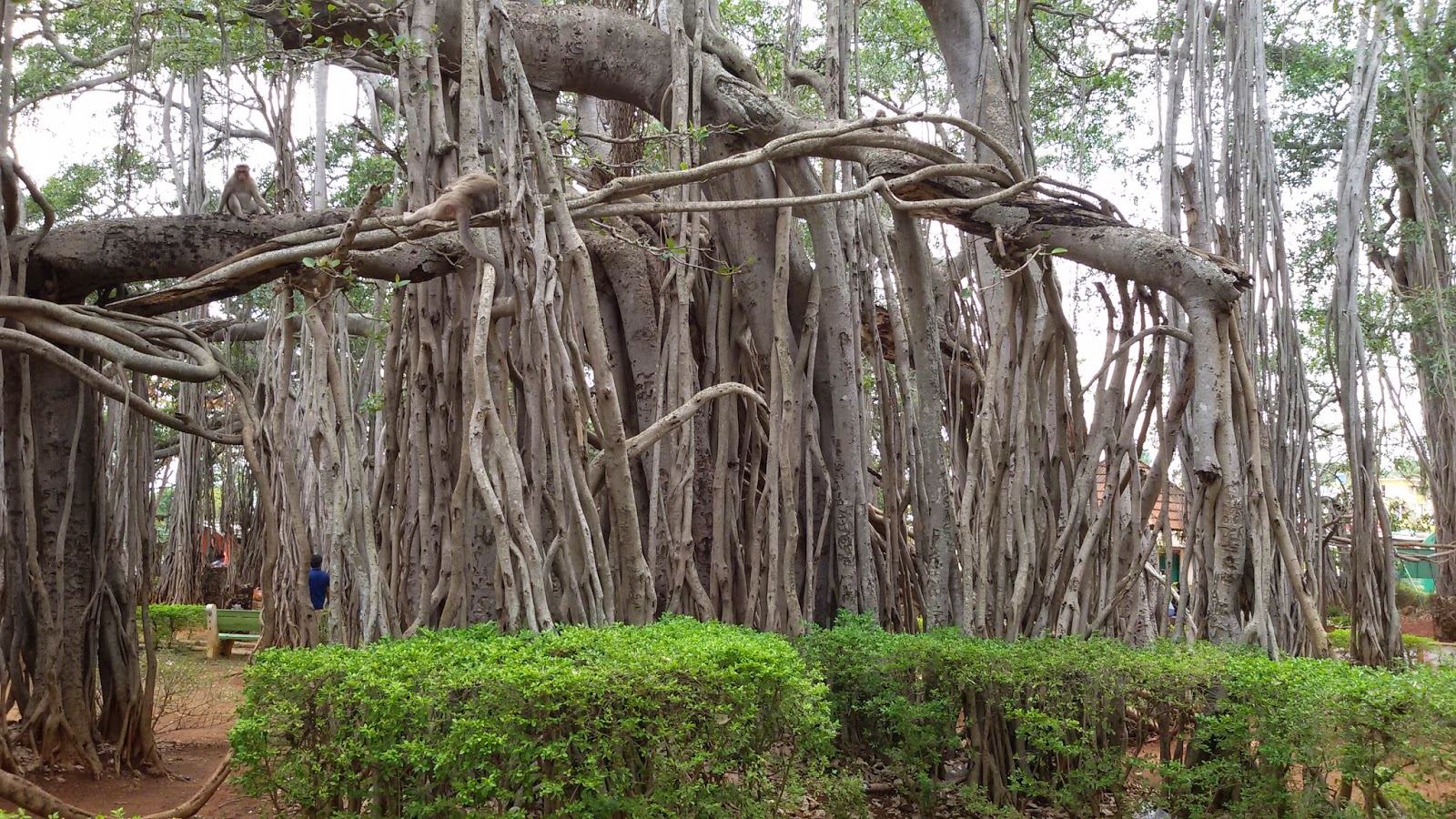 The tree has fenced boundaries, and benches for people to sit. There were a lot of monkeys. One should be careful while travelling with some eatables!

There are a few shops and restaurants nearby. 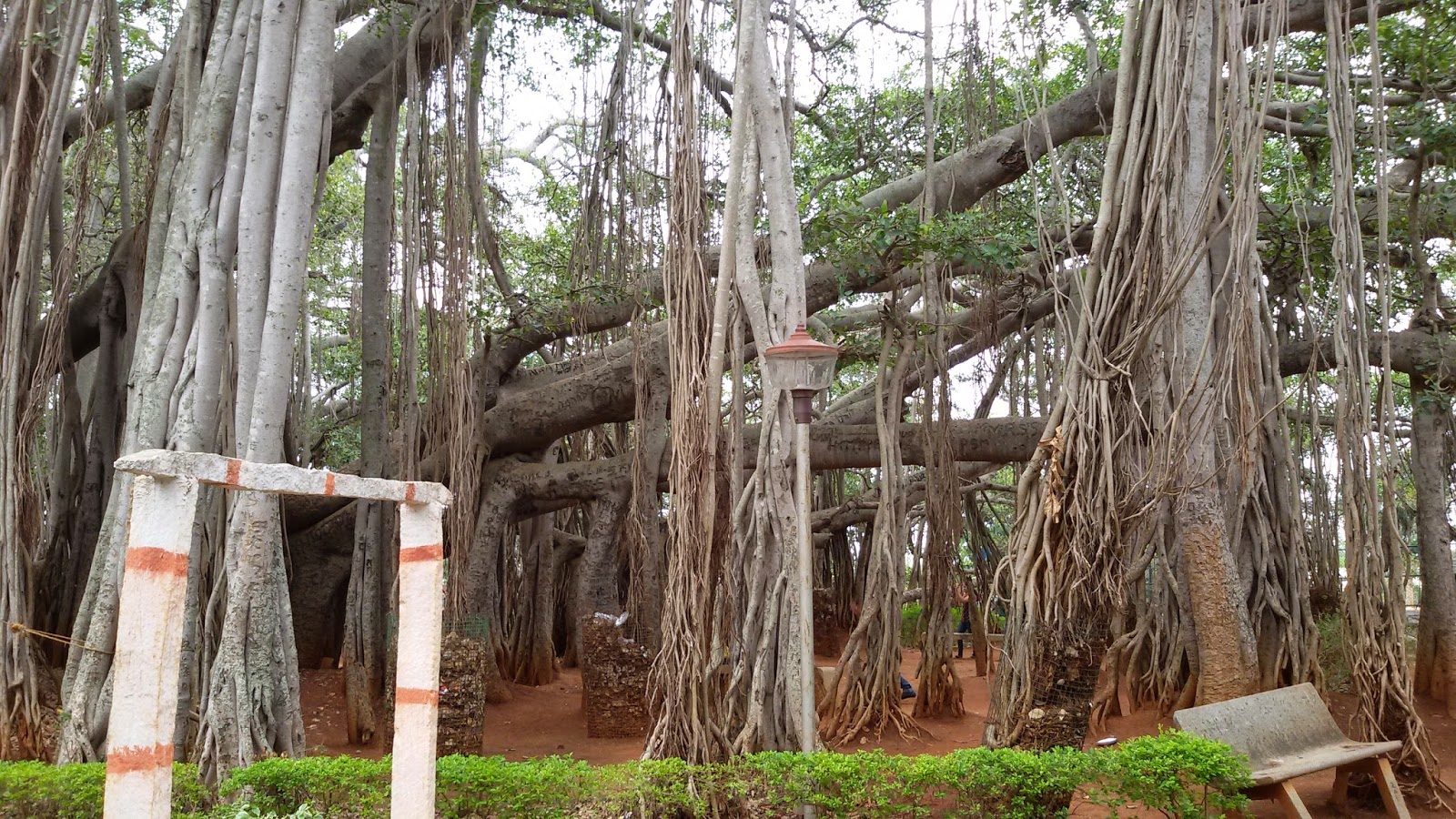 Kids like the place very much. They just ran across all branches in this "Jungle".

I was busy shooting the area with my new mobile camera.

There is also a small temple there in between this jungle. We went there and offered our prayers! 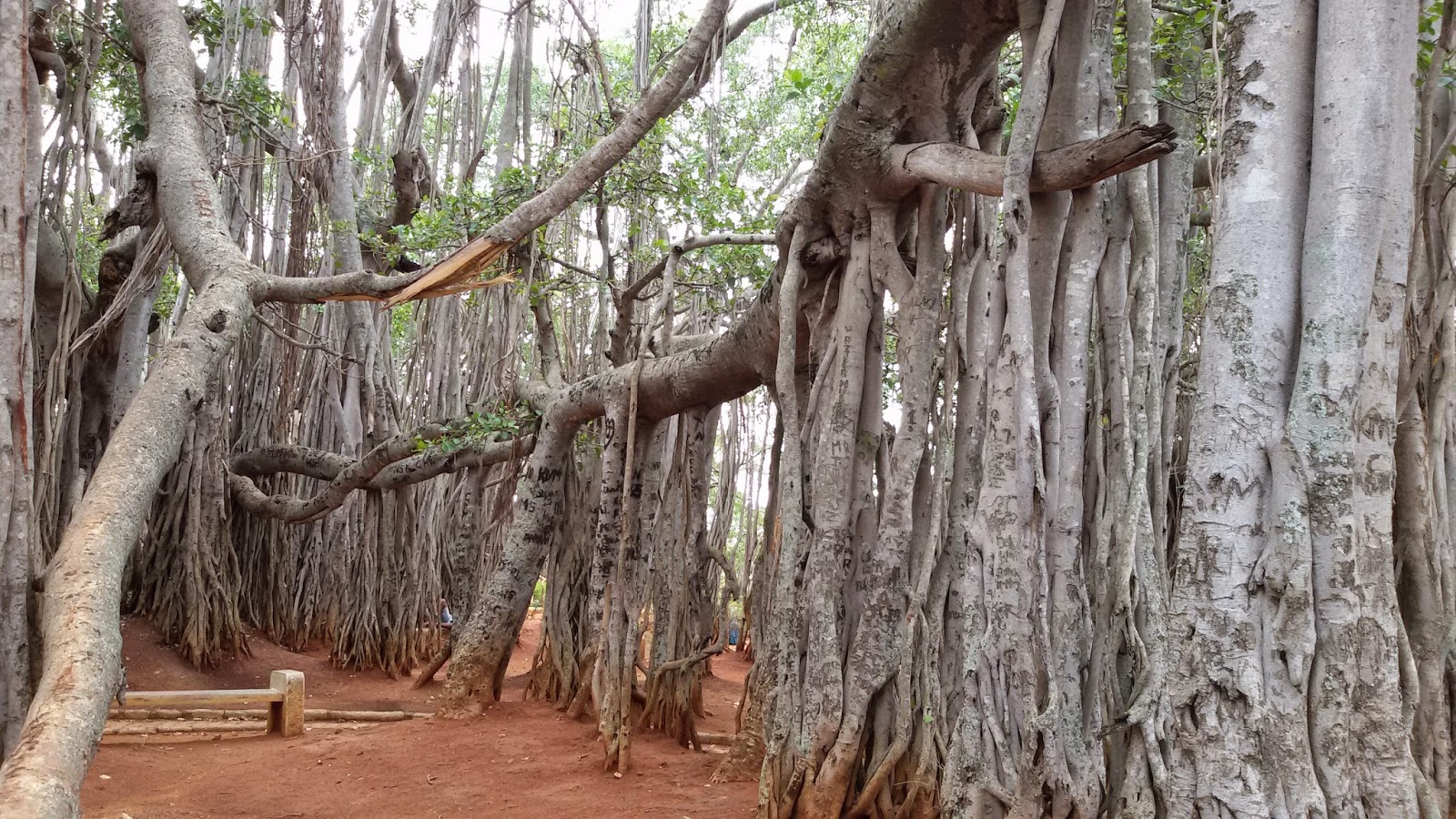 This tree is said to be the fourth largest. I found the below list from Wikipedia.

(1) The Great Banyan in the botanical garden near Kolkata, a clonal colony of Indian Banyan with a crown circumference of over 330 meters.

(2) The 450-year-old giant banyan tree at Adyar in Chennai, Tamil Nadu, India, in the grounds of the Theosophical Society headquarters under which people listened to discourses by luminaries such as J. Krishnamurti, Annie Besant and Maria Montessori.

(3) Pillalamarri, Peerlamarri or Peerla marri is an 800-year-old banyan tree located in Mahabubnagar, Andhra Pradesh, India.The tree has many banyan trees which grow in its proximity, like its children, hence the name. It is spread over three acres of land.

(5) Thimmamma Marrimanu, is listed as the world's largest baniyan tree in the Guinness World Records in 1989. The tree is situated about 35 km from Kadri Lakshmi Narasimha temple in Anantapur district, Andhra Pradesh. 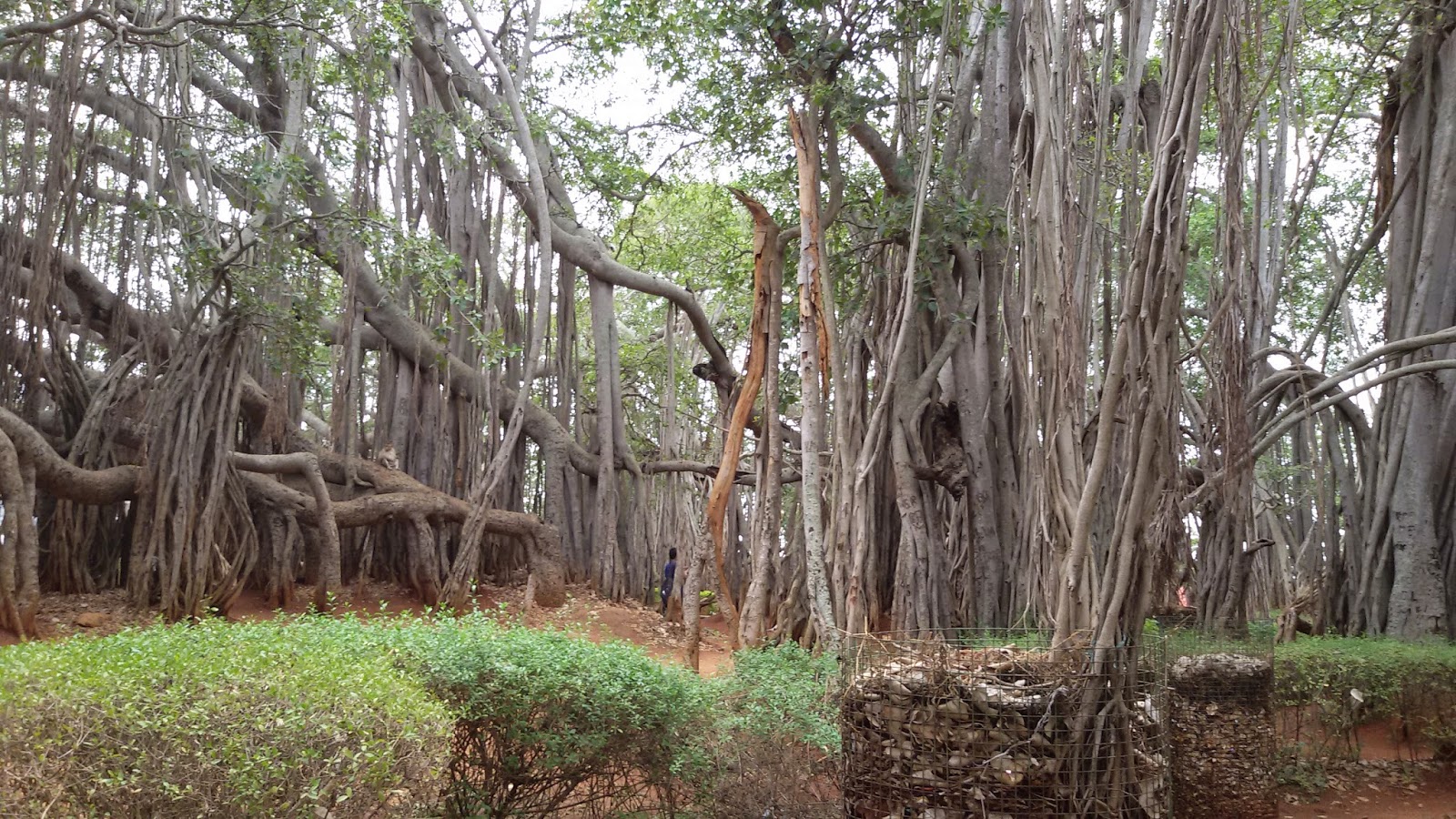 It was good to be there. The cool breeze refreshed us.

We spend some good time there just roaming in this forest of 3 acres.

Now we had option to start for home, but still I decided to move further to explore the Manchin Bele.

Manchin Bele is a dam site on Arkavathy river about 8 KMs further from The Big Banyan Tree. The surrounding area is beautiful with hills, water and greenery.

Last time when I had visited with Pundareeka, we were able to go till the shore. There I had seen snakes running in front of Car. That had made me little afraid and I had came out of Car after some hesitation.

I had seen there some army personnel, perhaps they were there for some training. 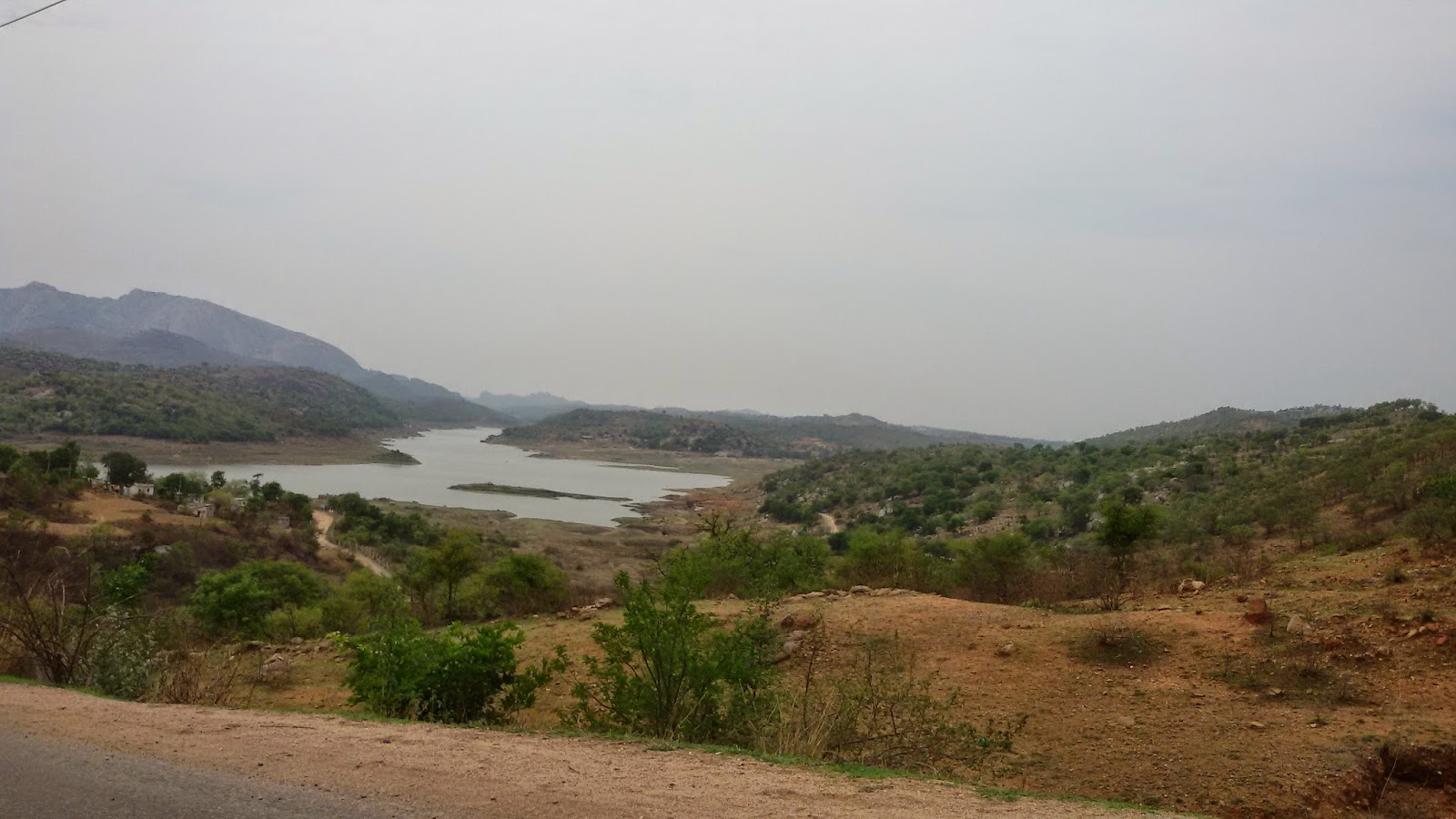 As we approached the Manchin Bele, the looks of Arkavathy with hills surrounding it was quite mesmerizing.

Unfortunately the route to go down to the banks of water or to dam site was blocked by security officials. I inquired about that and they mentioned that some incidents of chain snatching and also a few deaths in water by careless over enthusiasts had lead to this action.

We had no option, but to return back. This is a exceptionally beautiful place and definitely can be converted into a very attractive tourist destination.

We took the path back to home via Big Banyan tree to Ramohalli cross.

It was around 330 PM, when we were back home after a good short trip.