Shivagange is a small hill and pilgrimage center located about 60 KMs from Bangalore. This place is having various temples such as Gangadhareshwara temple, OlakalTeertha, Nandi Statue, Patalagange etc.  A historical rock statue of Nandi or Basavanna carved on top of a steep rock is considered as a spell binding sculpture because of its location and the surrounding view that it provides. 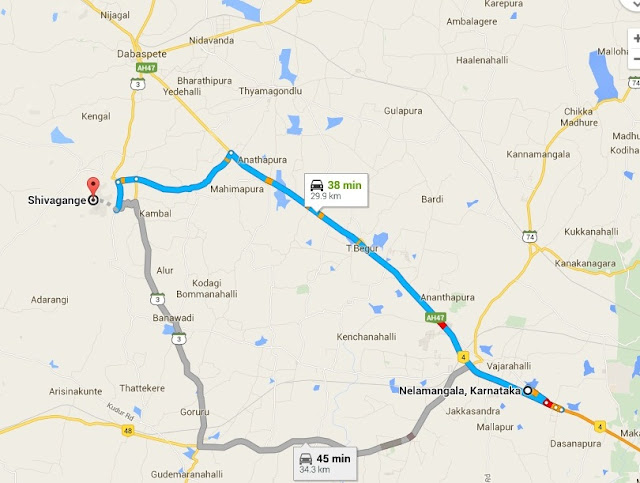 Shivagange is equally famous among the trekkers as well. It has total height of about 1360 Meters and has some steep climbing to be done to reach the top.

ShivaGange is off Tumkur Road near Dabaspet.

After reaching top, the trekker is rewarded with spell bounding views nurtured with cool breeze and very blissful atmosphere. 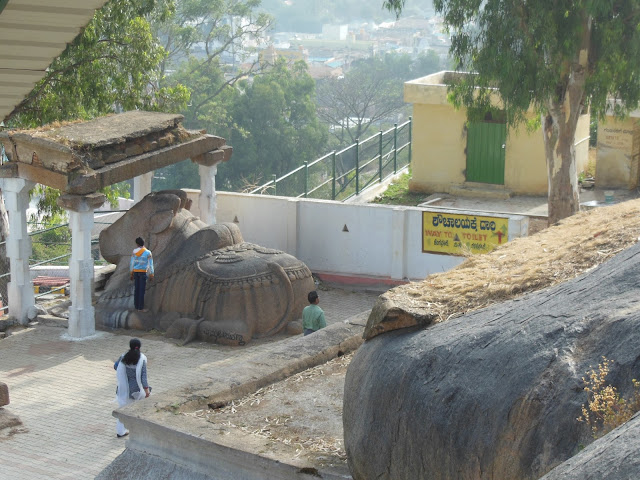 In my office, the entire team was raring to plan some trek and after some discussion we zeroed on to Shivagange.

I had tried one attempt in year 2006 along with friend Anil, but was unsuccessful. This was second attempt for me to do it now! 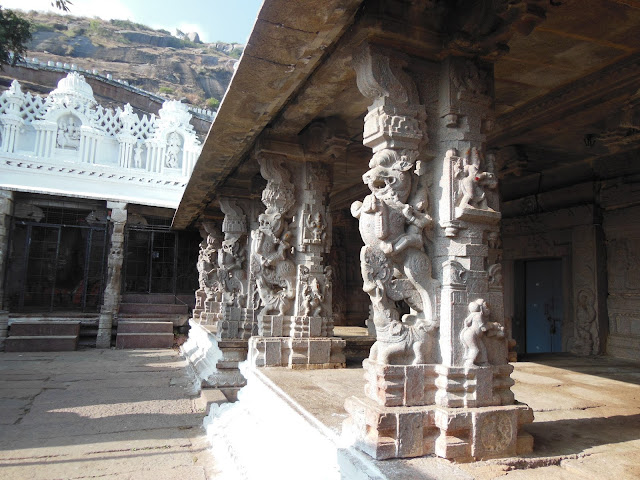 There were total 8 trekkers including me in the group. We left our homes at about 530 AM. We were in two cars, driven by Vethan and Madhukar.


The plan was to start trek as early as possible to avoid the wrath of Lord Anshumaan. The entire hill is made up of large stones and they starts showering heat once the blessed lord of light and heat is above the horizon. 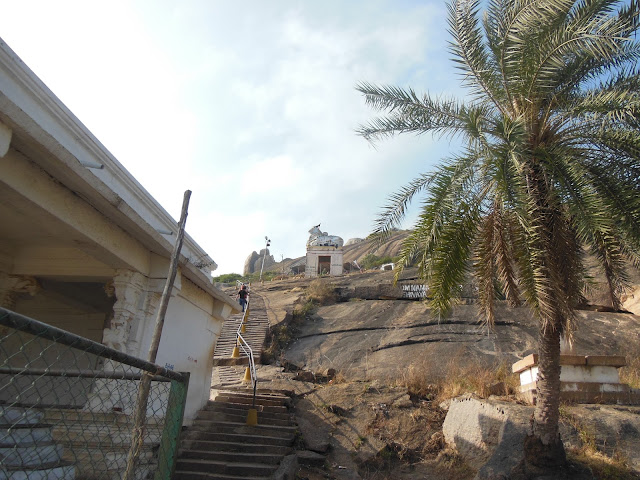 After we crossed Nelamangala, we met with quite think mist. In cities we don’t fnd it often and is more a symptom of rural India. We stopped for breakfast at Kamath Upachar.

We were there at the base of hill at about 9 AM and it was time to scale the heights!

An interesting belief about this temple is that if an abhisheka is performed with ghee here, the ghee turns to butter. It is said that the ghee that turns to butter has medicinal powers and can cure ailments.

Most of the temples here are basically caves, converted into temples. These Caves are sanctified by many sages (Included revered sage Agasthya) with their presence and meditation done there. Hence all these have a lot of powerful aura, which can be felt easily by mere presence there. 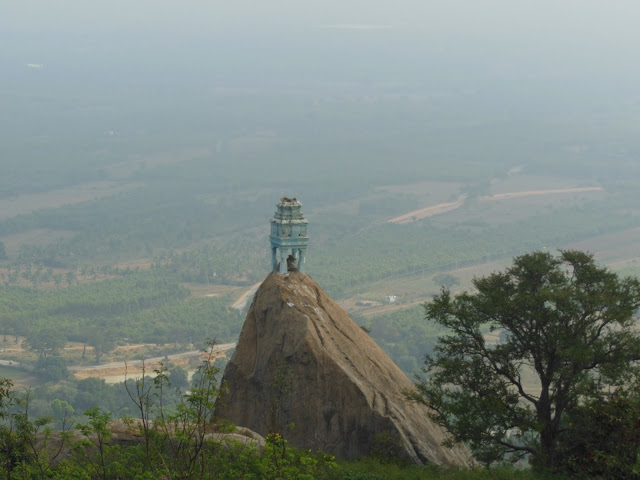 Slowly we started ascending, the steps are carved out of stones and hence quite uneven and not in good geometry. Initial climb is quite slippery and one need to be quite careful.

Some of us, including me and Rahul were quite skeptical about our abilities to ascend the hill, but the young team members made the trek cheerful and enthusiastic and all moved slowly but steadily towards the summit. 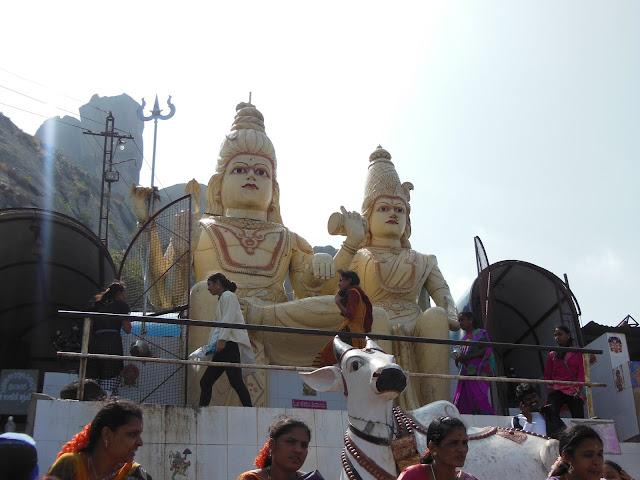 After Gangadhareshwara temple, next major stop was Patalgange. It is also a cave and ShivaLinga is on the top of a underground stream. Just behind the sanctum, through one hole one can put his hand and touch the water. It is said that all those who can touch the wwater are the blessed ones.

I am happy to declare that our entire group was blessed.

A little bit of history as we trek further. 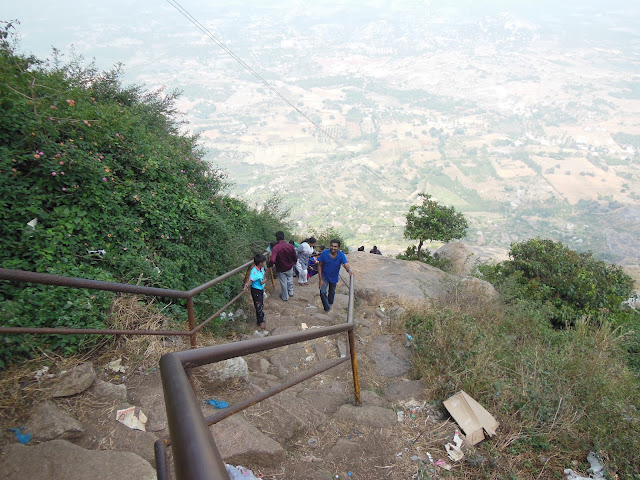 The hill was fortified during 16th century by ShivappaNayaka which is in ruins. Just behind the Gangadhareshwara temple, the ruins of the fortification can be seen, which is in very dilapidated state. The founder of Bangalore, Magadi Kempe Gowda also improved the fort and kept a portion of his treasure in this fort.

Ascending slowly we reached the next major stop where the large size idols of Lord Shiva and Parvati is installed. 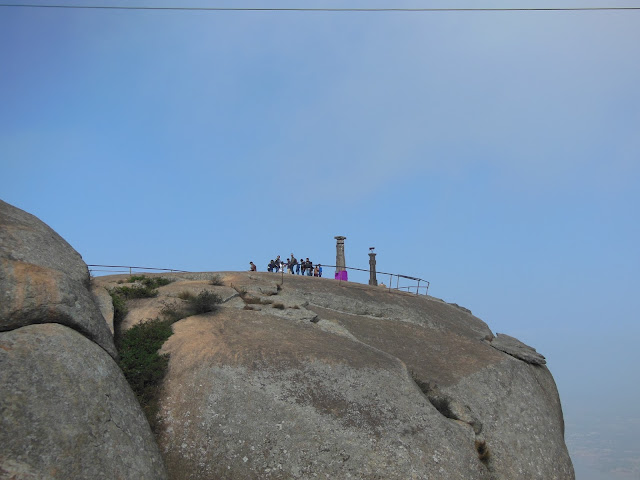 At first, some of us felt that we reached the summit. Though my mind was not ready to accept… It can't be so "easy".

The rest in the shadow of blessed Lord gave us further energy and suddenly Madhukar declared the last stretch, the most challenging one, is calling!

Sivananda, Vethan, Satyaban, Anwar and Priyank took it enthusiastically but me and Rahul got a bit skeptical again.

But now no going back… the summit is calling!

The total ascent is approximately 800 metres, much of which is climbed towards the end of the path. Now the trail has become steep and narrow. Thankfully the railings are provided by administration. Taking the help we proceeded with almost vertical path! 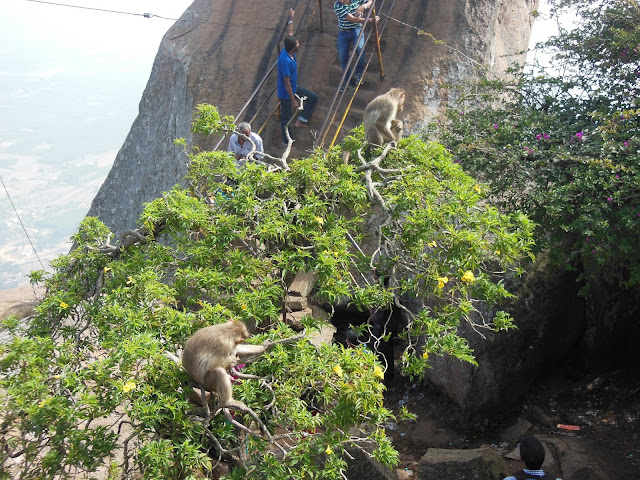 Monkeys are a pest in the area, and one need to be very careful not to carry any eatables or any such thing which can attract them They snatch away even the water bottles. So these should be kept in backpack. 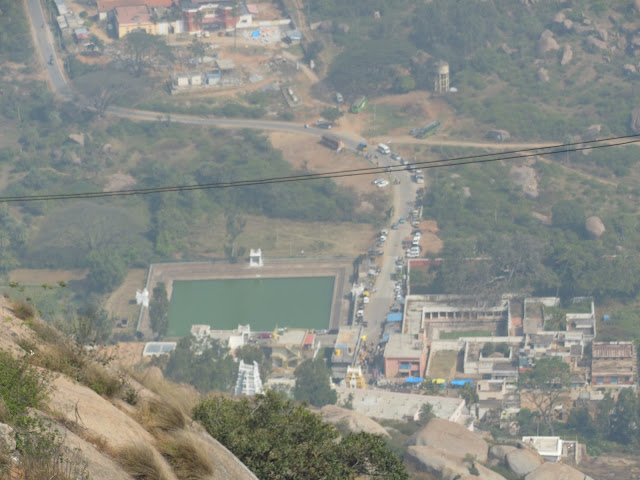 Another things is that keep yourself light. There are a lot of small shops enroute selling eatables and water etc. So don’t load yourself and reduce the efficiency! 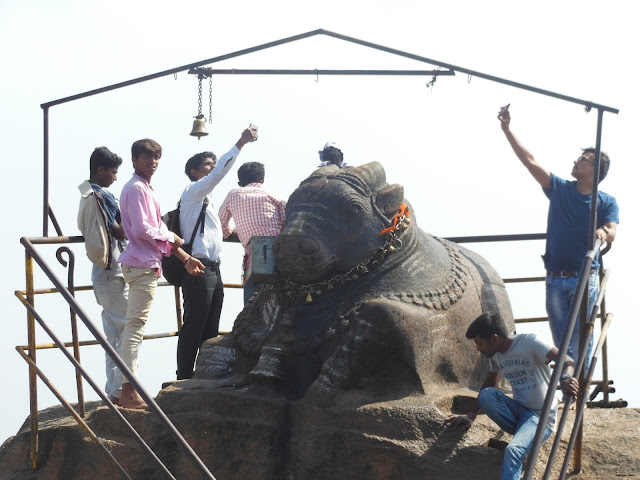 The railings, are quite rusted but still dependable. These needs some maintenance now as we don’t know when they can refuse holding the trekkers.

These steps are very narrow and not easy. Extra caution required.

So here we are…just below the Nandi (Basava statue). To reach there was the last stretch. 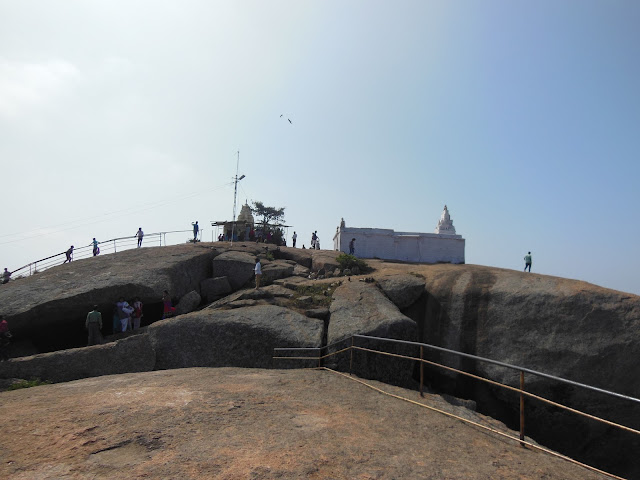 The steps to there are very narrow and one needs to be very careful. With great courage, I ascended those last steps and then found the most scary thing about entire trek!

The Nandi idol is a monolith, carved from the standing rock. In this rock, we ascended and found that at the back side there is no place to put the feet and there is straight drop from there. Though there are railing all around still it is a bit scary while doing circumambulation. With name of the most merciful Lord Shiva I complete the task! 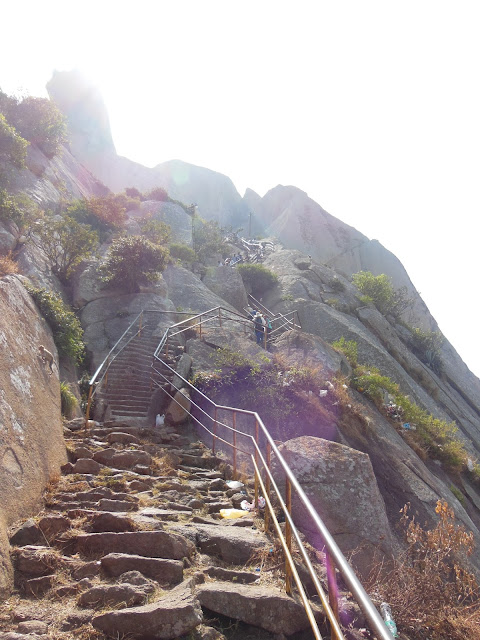 One need to be very careful here. Though railings are there but over reliance of these railings is not good.


One by one all us completed the task and then we walked towards the more open area. This has a small temple and a few pillars, which were perhaps used to lit the Deepam.

We spend about 45 minutes on the top. Vethen was enjoying the meditation, while rest of us were enjoying the breeze and the Sun.

As we descended, we visited the Gangadhareshwara temple and then took our lunch at Temple Bhojanalaya. The simple lunch of Rice and Sambar was very tasty and good.

We were back to to base of hill by 2 PM. So total 5 hours for trek, temples and lunch!

A few points to note:

1.    Trek Level: Moderate.
2.    Need to be careful with monkeys
3.    Go in comfortable and non slippery footwear.
4.    Take help of railing but don’t over rely on them
5.    Aged people and people with kids better avoid after Patalgange.
6.    Don’t carry eatables as all such things are available enroute.
7.    Don’t overstretch oneself, take frequent rests and ascend till you are comfortable.
Posted by trips of alok at 11:12 AM