Athirapally Waterfalls are one of the best and most famous waterfalls in India. This magnificent waterfalls on Chalakudy River is located at the entrance to Sholayar hill range in Thrissur district in Kerala. 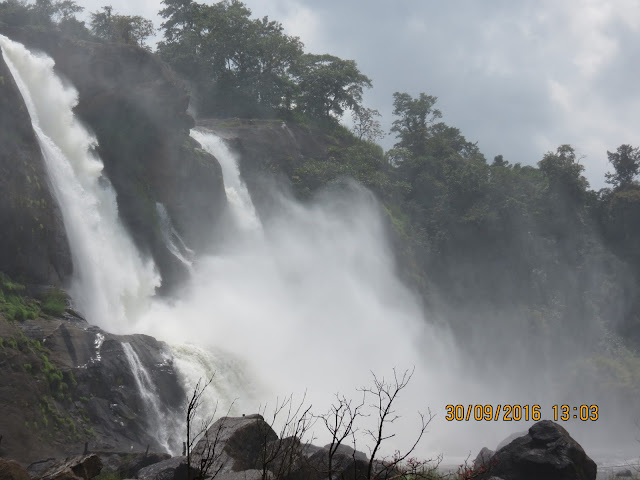 This water drops from a height of 80 feet through several parallel streams offering a great scenic beauty. In monsoon season, the water gets strength and all the streams join together and appear like Niagara Falls.
Though I am in South India for long, but this waterfall came to my notice recently. I was thinking to visit the place and then one fine day, friend Rakesh called me for a weekend visit to some falls. This set the plan to visit Athirapally.
I quickly scanned the maps and some material on Wikipedia about Athirapally and nearby places. Besides Athirapally falls, there are Vazhachal Waterfalls and Charpa Falls nearby. Also one can plan a visit to Sholayar Dam and Malakkappara tea garden. After that Tamilnadu starts. Valparai is the first town inTamilnadu here. It is also a very beautiful place, visited by me sometime back.
Rakesh did the train tickets from Bangalore and also for accommodation at Kerala Tourism Motel near Athirapally.
The train ticket was till Cochin, but we alighted at Chalakudy itself early morning. This is nearest railhead to Ahirapally falls, about 30 KMs.
An auto took us to bus top and about an hour later, we reached Athirapally.
Chalakudy (32 km) is the nearest railhead to Athirapally.  Other near cities are Thrissur (55 km), Kochi (73 km) and Palakkad (110 km).
KTDC Araam Motel is very small and has only two rooms. Rooms are ok but need immediate maintenance.
After getting fresh and breakfast, we walked towards the fall. 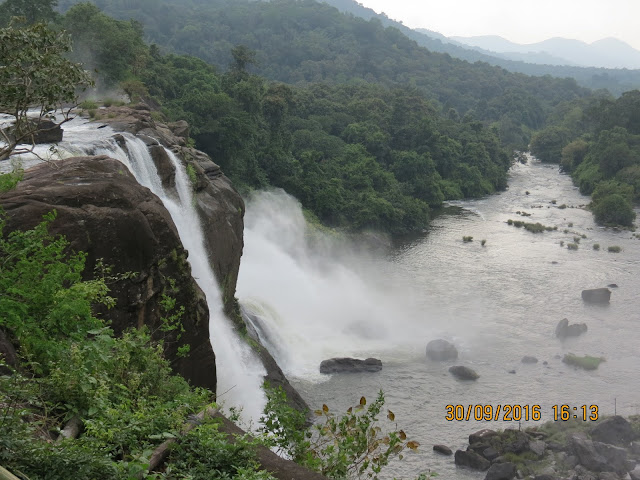 There are two views to enjoy the natures’ beauty here. At the top of the falls,It offers spectacular views of the Sholayar hills and a unique view of the waterfalls from this spot. About 10-15 minutes’ trek down from top of the falls will take you to bottom of the falls where the greatest beauty of the waterfalls can be experienced.
First we headed to the top view. Suddenly clouds gathered and a small spell of blessings started from heavens. We took shelter at a tea/coffee shop, along with many other tourists.
One need to be careful about monkeys. They want mineral water here and relish on icecreams and other delicacies!
As the rains subsided, we walked slowly towards the river and the top of the falls. The bounty of nature was swiftly flowing and forming the spectacular falls. Many people were taking bath at upstream. Rakesh also decided for that, but I kept myself busy with photography and just sitting and enjoying the nature.
The water is crystal clear and can be directly consumed. Coming through dense forests, it is rich in minerals and other herbs.
But humans are difficult to change. I saw many soiled garments near river and also diapers. Who will make us to have some hygiene and civic sense?
The Forest around is also the natural habitat of different species like hornbill, elephant, tiger, leopard, bison, giant malabar squirrel and lion-tailed macaque. 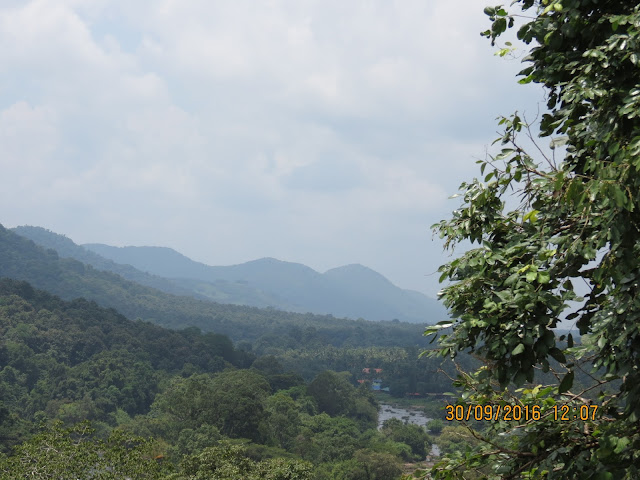 I came to know that the Athirapally falls never dries out and can be visited anytime during the year. Though the waterfall appears in its full glory during monsoons. Though at monsoon time, the top view may be ok, but down view may be a bit dangerous. 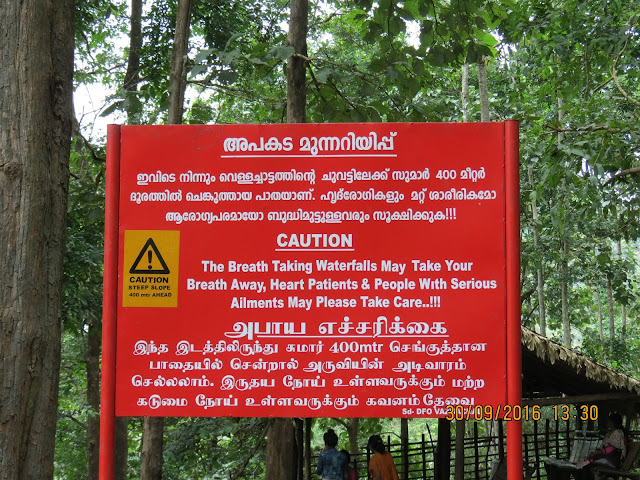 Being there for more than an hour, we decided to take the paved way to the down of the falls. It took us about 15 minutes to reach there, where the bounty of nature was falling down in full force majestically.
As the air used to change its intensity and direction, so the heavy mist used to come and make us wet. Need to be little careful about the camera and other electronic items.
The guards were there to make sure nobody cross the “LakshmanRekha”. Still many enthusiastic people tried to reach as closure to the falls as possible, only to get admonishment from the guards.
Overall an excellent place to be.
We ascended back to the gate. It was noon time. We decided to take food at nearby restaurant and then proceed to other two falls nearby.
In Kerala, almost all restaurants serve beef, which is very uncomfortable to me. But food has to be taken so we took vegetarian meals, though Rakesh added some local fried  fish with his veggies.
The view of falls from restaurant was also very beautiful.
There are buses available but I thought better to take a return auto. The auto asked for Rs 10 per KM fare and after some thought we agreed.
First is the Charpa falls about 2 KMs ,as we started from Athirapally. We continued to Vazachala Falls, about 5 KMs from Athirapally and decided to stop at Charpa while returning.
The garden and greenery surrounding the Vazhachalam is very serene and one can spend good time here. I will not call it a “fall”, infact waters of Chalumudy, rushes down on a quite steep slope roaring.
From Vazhachalam, the Sholayar Dam and Malakkappara ar further towards Tamilnadu side. The road further is forest road and I was excited to take it. It was evening now and so decided to venture there next day. 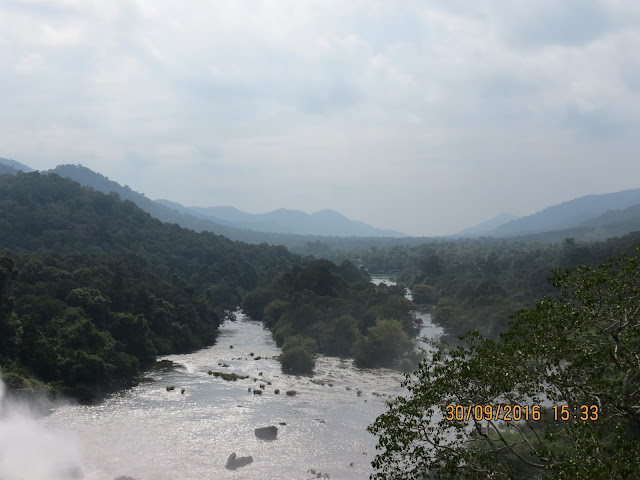 While returning, we briefly stopped at Charpa falls. I am still confused if this falls is on Chalumudy river or not.
The driver told me that during summer thus falls dries up. But at this moment, it was full of water and quite beautiful. 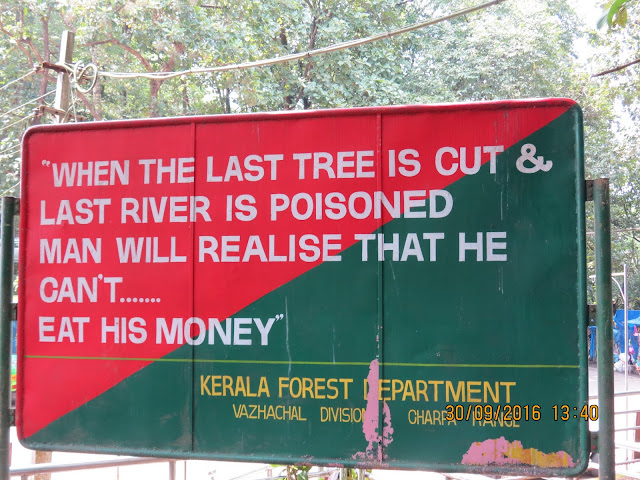 We were back to Athirapally and again decided to spend time at upper view of the Athirapally falls. Sitting quitely, doing nothing and just gazing the forests, mountains and the waters is a luxury not to miss. How a gentlly flowing river converts into a roaring giant at the split of a second is just breathtaking.
Time converts everything. 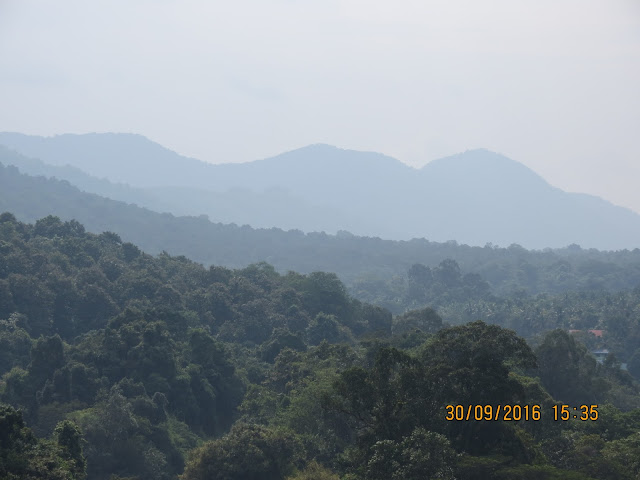 As the Lord Anshumaan decide to light the other part of the world, we  strolled back towards our Motel. A cup of tea refreshed us again. We further took a walk towards the other direction as Rakesh was interested in some fresh “Taadi”. Some local shopkeepers advised him against the quality there and then we returned back.
On the way back to motel, there is a view point, which gives excellent view of the falls. We were quick to take some snaps. 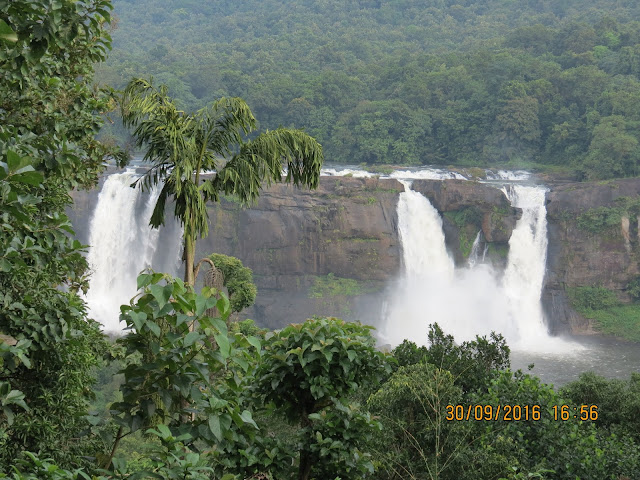 Next day morning, after breakfast, we vacated the room and took the bus to Malakkappara.
I always love taking the roads through the forest; the serenity away from the maddening sounds of city life is always a welcome respite. It’s always an excellent opportunity the fill the lungs with pure oxygen. 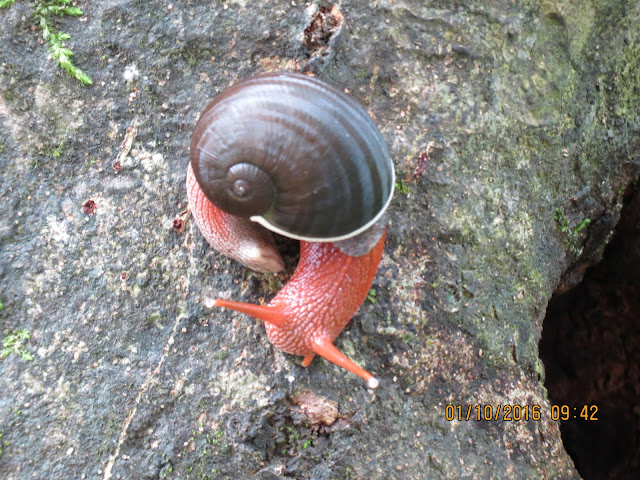 Through the curvy roads, we reached Poringalkuth. This place is famous for a dam and provides speed boat facility.
The bus driver stopped there to take tea. I started exploring the nearby forest area and one villager pointed me towards the giant Malabar Squirrel. I was quick to capture it in my camera. I have also seen these at Dandeli. 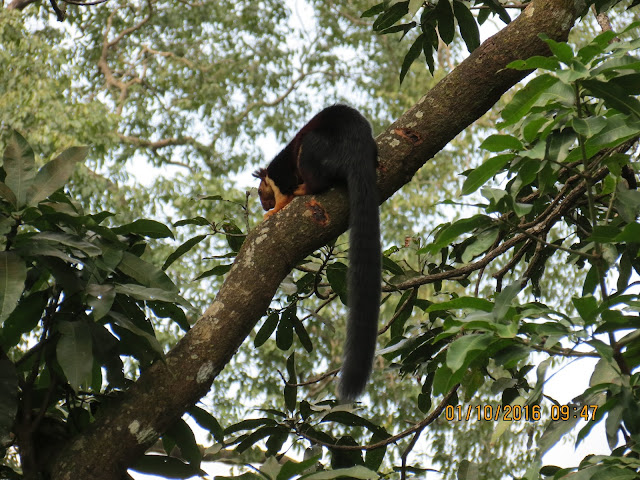 Rakesh and me discussed about enjoying speed boat at Poringalkuth, but there was no auto available to go to dam site some distance away. Also I was not sure about the return bus.
It is always good to explore such region with own vehicle or taxis!
On the road further, we saw the beauty of dam. A large water reservoir surrounded by hills and forests! 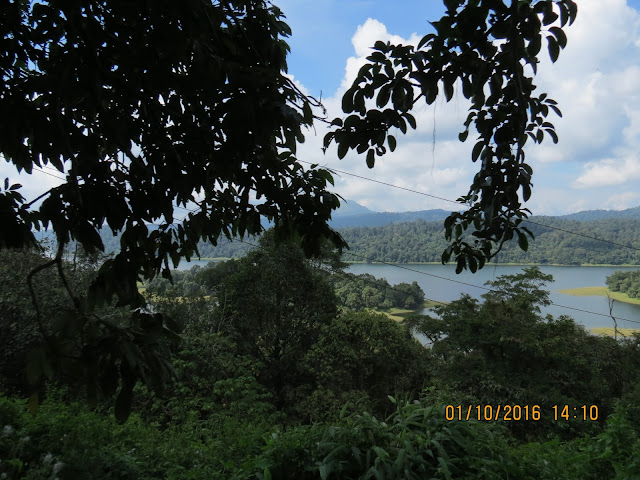 I heard that there were pedal boats as well as speed boats available. It offers an scenic area of the sholayar hills with rare varieties of flora and fauna.
About 12, mid day we were at Malakkappara about 60 KMs from Athirapally. Immediately I enquired about thevreturn bus. The last bus to Athirapally was at 1 PM, so we had one hour to explore the small town full of tea plantations. 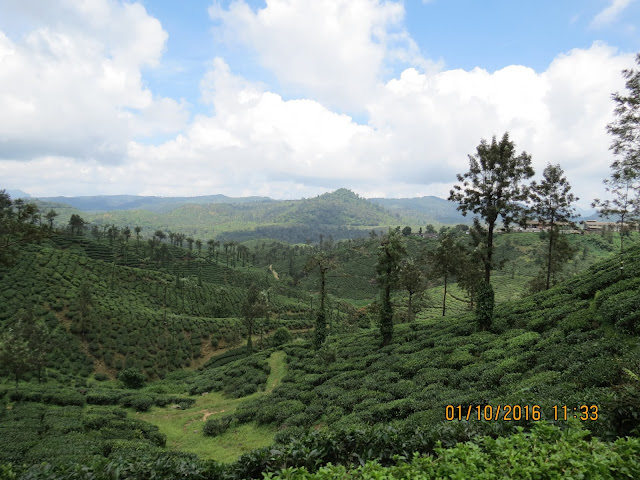 Malakkapara is a border village with Tamilnadu. As we cross into Tamilnadu, the town of Valparai starts. The whole area is Tea Plantains. Tea factories are also here.
We decided to take a walk in the tea estates, but were stopped by some guard. So we could not go deeper, and confined ourselves at the outskirts capturing the moments into camera.
The area consists of the tea estate owned by Tata Tea. We also bought some tea there and Rakesh also took some homemade chocolates. 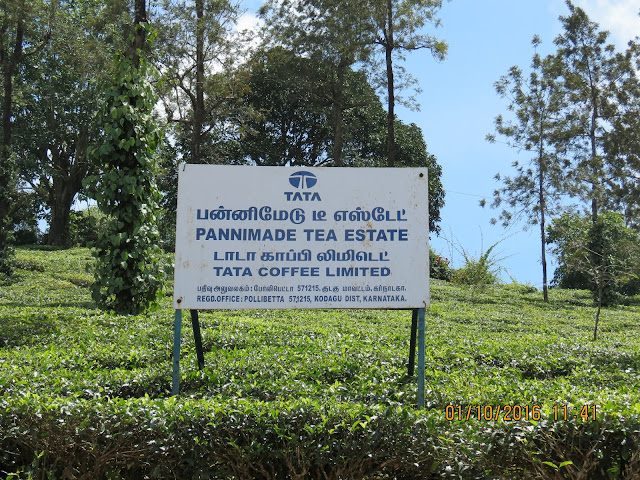 The famous Sholayar Dam is situated just 5 kilometers away from Malakkappara, on the way to Valparai. I enquired about it and a few people suggested that it nay not be ipen for tourists, so we dropped the idea.
We took the return bus to Athirapally and got down at Thumboormuzhy  dam and butterfly park. It is in between Chalumudy and Athirapally. 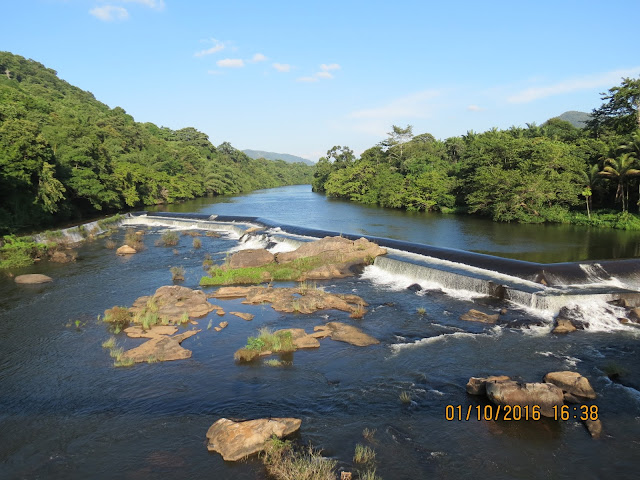 And soon we realized that a visit to Athirapally will be completed only with a visit to Thumboormuzhy. 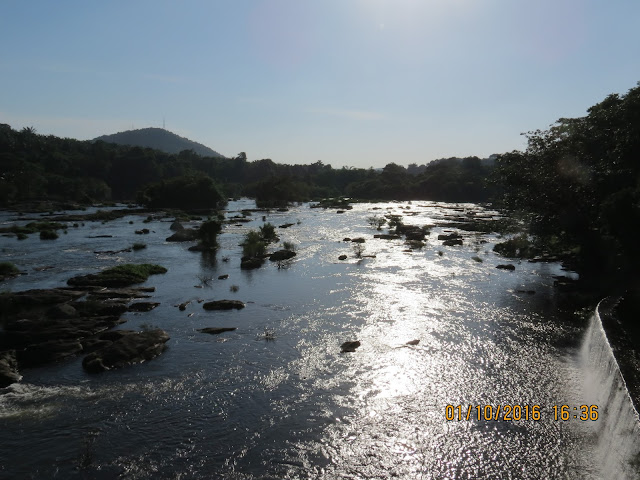 It is a small check dam with beautiful views. There has been a park followed by a handging bridge to go to the other side of the Chalumudy river. The views from bridge is just stunning!
We roamed entire area, clicked at will and then walked to other side of bridge on way to bathing ghats.
Though I was not interested in taking bath, but just sitting on the banks full of thick vegetation and water gently flowing through multiple small streams is a memorable experience. Many people were taking bath. The water is rejuvenating and quite shallow so entire family can have some good time playing with waters. 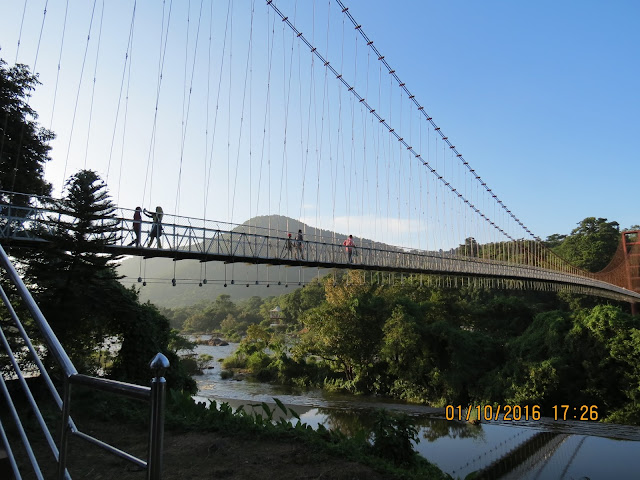 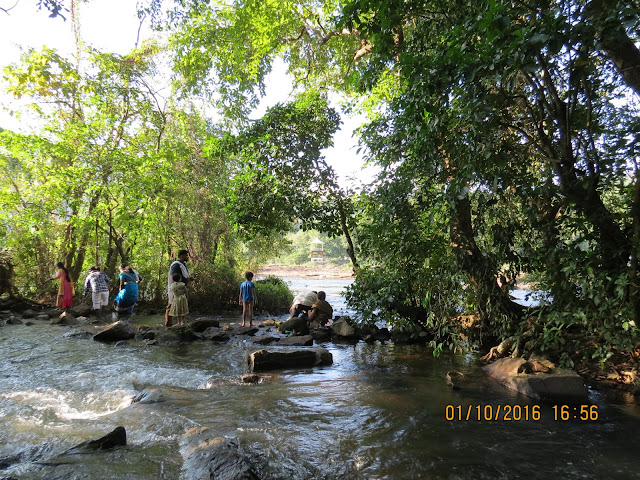 Refreshed with our visit, we walked back to the gates. As we were waiting for bus, Rakesh rushed to a nearby restaurant and packed some vegetable Biryani for our dinner.
The bus dropped us at Chalumudy town and we took an auto to Railway station.
The train was quite late. We took our biryani dinner band then roamed in the adjacent area patiently waiting for it.
Morning we were at home, sweet home!
Posted by trips of alok at 10:37 PM