Kumbh is a special occasion to witness the heritage of Vedic culture. At the four places of Haridwar, Prayagraj, Ujjain and Nashik, every three years respectively, million converge to bath in holy waters of sacred rivers, and to meet the saints and other holy men and women, to take spiritual guidance. These rivers who have the place equivalent to our mothers, nourishing us with their nector equivalent waters since time immemorial. Gods come to their ghats to play, ascetics meditate there and no better time other than Kumbh to pay our respect to them.
Kumbh is also the occasion, where all those asetics can be met, who are otherwise not easily accessible, they may be living deep into caves of Himalayas etc. 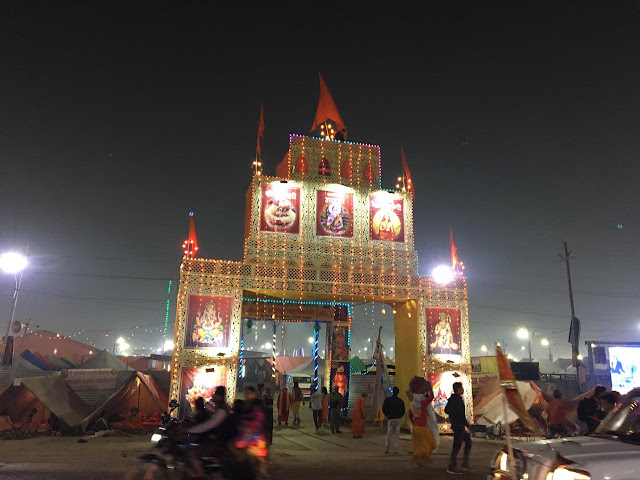 I was thinking the right day to visit. I wanted to take my parents as well, but dropped the idea as in their current age, it will be difficult for them to walk. In general, because of heavy rush the motor vehicles are stopped at a distance and so to reach sangam, one has to walk, sometimes many KMsas well also sometimes routres are diverted to take a longer route as part of crowd management.
Many birds were hovering everywhere as faithful were throwing eatables for them. I feel its not good as otherwise the wild nature of birds and animals gets altered and they become dependent on humans for food. 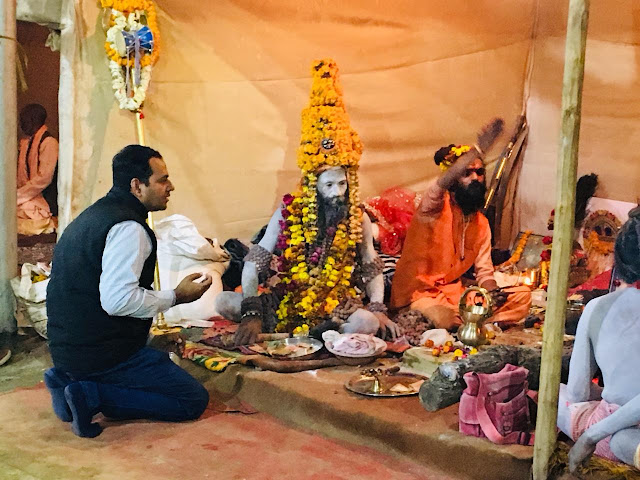 It was very nice journey through boat to Sangam point, these rivers flowing perhaps since the earth came into existence, they have blessed all our ancestors and will continue to do so for all our coming generations. 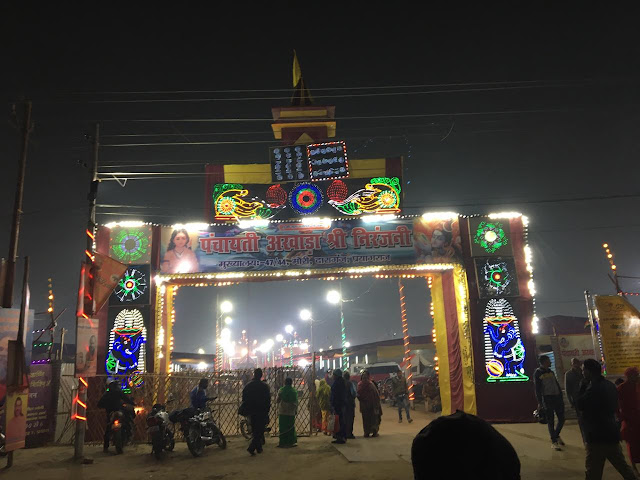 The view of Allahabad fort was excellent, It is said to be erected by Akbar in 1583 AD, though I dont believe on this exactly, Perhaps there was already a fort which was repaired and strengthened by him. Prayagraj was named as Allahabad by him. 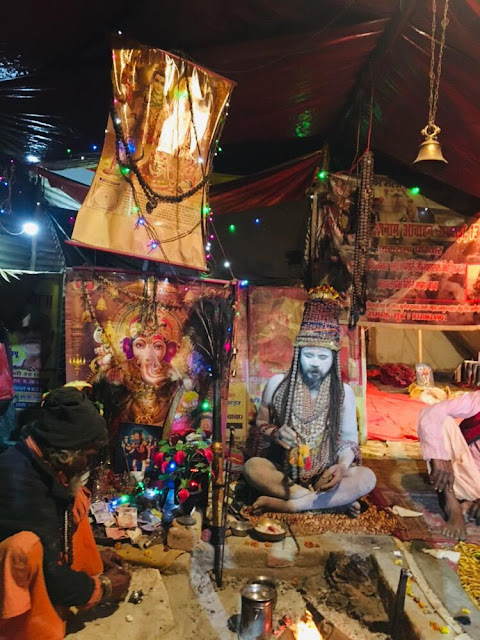 There was a sacred "Akshay Vat" tree, said to be the witness of creation by Bramha and survivor of "Pralaya". This tree was taken inside the fort when outer wall was constructed by Akbar around mid of 16th centuary. Since then till now, it was away from the eyes of faithful and now in 2019, after almost 450 years or so, under the current government, it was open to public! 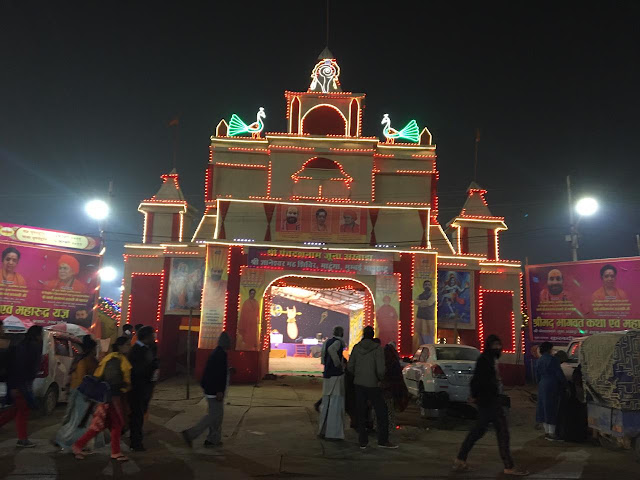 Rowing slowly our boatman, took us the middle of confluence. Rush was there but we found a suitable place to disembark and take bath. Depth of water is not much, I feel around four feet or so. This is perhaps due to silt deposit.
Anil and Harsha went first to take bath, while I waited for them and tried to capture the moments in my mobile camera.
As they were back after getting refreshed with the cold holy water, it was my turn.
The water was not only cool, but also had a good flow and surprisingly clean and refreshing. With the help of rope, I took multiple dips and asked Anil to capture me in his camera. We also took some holy water to be carried to our homes to be used for any sacred occasion.
Slowly we ferried back to banks.
There was a long queue, but we were mentally prepared for it and not afraid of the crowd. After about 45 minutes or so, we were able to enter the fort.
The Akshat Vat tree was closed through a glass from the side, from where it was allowed to be seen. Army jawans had cleaned the area.
It was a very nice feeling that with great fortune, we were able to witness a symbol of our faith, locked for almost 450 years.
Next stop was Saraswati Koop. 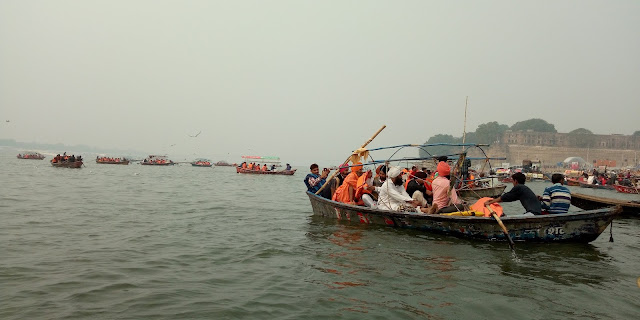 On the way we passed through "patalpuri cave", It is an underground cave from where the roots of Akshay Vat can be witnessed. Now with many idols have been installed. Anil and me just took a round and came out. As per the time one has, this place can be visited or avoided. 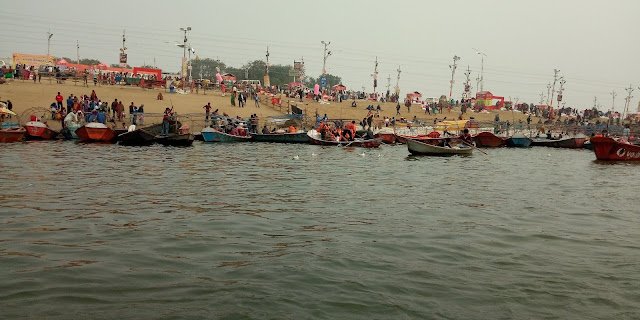 Saraswati koop or well is towards the exit gate. The well is covered with glass and a beautiful whitle idol of Mother Goddess saraswati, the Goddess of learning and wisdom, has been installed. The underground water, which is said to meed with Ganga and Yamuna through an underwater current can be seen from here.
It was almost 2 PM by now. We rushed towards the Famous "Lete Huey Hanuman Ji" or the "Lyeing Hanuman" Temple. 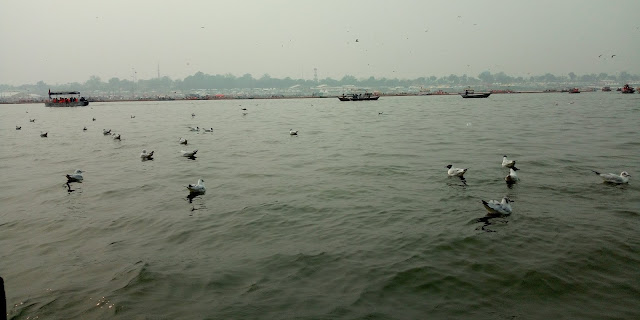 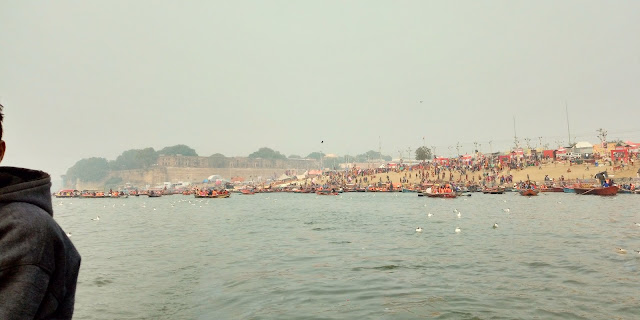 Harsha had a link with one e-Rickshaw driver, whom we called to go for sight seeing. First we went towards the Mankameshwar Temple and then towards the bank on other side of Ganga, where VIP tents were there. We took our late lunch in form of Maggi poha and Upma. 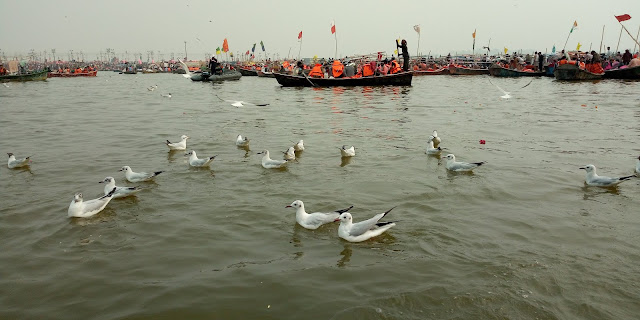 Anand Bhavan is a historic house museum. This mansion was bought by Motilal Nehru in the 1930s to serve as the residence of the Nehru family when the original mansion Swaraj Bhavan (just behind the Anand Bhawan) transformed into the local headquarters of the Indian National Congress.
We took tickets of both floors. One can witness the private rooms of Nehru family and the meeting rooms of Congress leaders in those days. There is also a room, where Gandhiji spend sometime.
Other side of mansion is a varandah, where Indira was married to Firoze. He was adopted by Gandhiji just before this marriage and so he started using his surname of Gandhi.
Jawahar Planetarium is situated here, next to Anand Bhawan, in the same compound. It is quite small and was closed at that time.
Just behind Anand Bhawan is Swaraj Bhawan. Here one can see, many photographs and painings of Nehru family and also some ralted to freedom struggle.
Anand Bhavan was donated to Indian government in 1970 by the then Prime Minister Indira Gandhi, the granddaughter of Motilal Nehru and daughter of Jawaharlal Nehru.
It was getting dark now and we asked, driver to take us tiwards the "Naga Akhaara".
Naga are the among the fierest celibate hard penance ascetics. Generally they are followers of Adi Yogi Siva, though there are "Vaishnav" as well as "Shakta akhara" as well. They follow Vishnu and mother goddess respectively.
Akhaara belong to the order of different Gurus, most of them leading towards Aadi Shankaracharya. Most famous among Akhara are the Juna Akahra of Nath Sampradaya. The main guru is Guru Gorakhnath, who is said to be an Incarnation of Shiva himself. 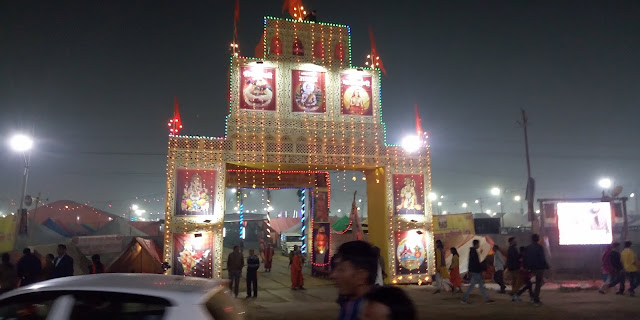 The word "naga" denotes the naked ascetics. Generally they dont wear anything excepts sometimes a small piece of cloth at loin. They smear themselves with holy ash and spend their time in meditation and yoga. Being naked symbalises the renunciation of even the cloths. 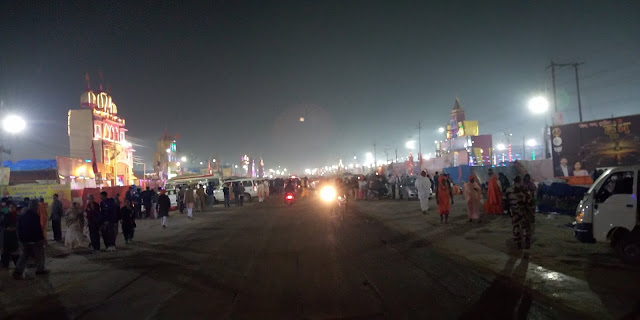 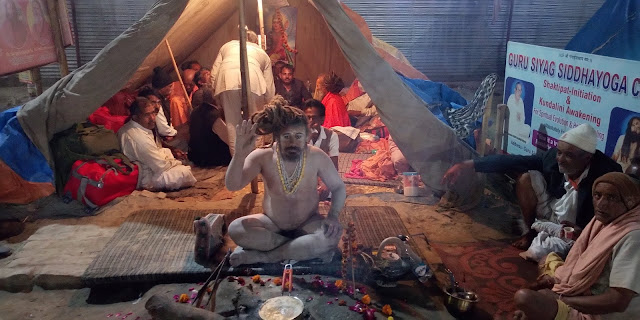 The arrangement were quite good. Even at Railway station, I saw that police did not allowed anybody to enter or exit the train, till it came to complete halt. 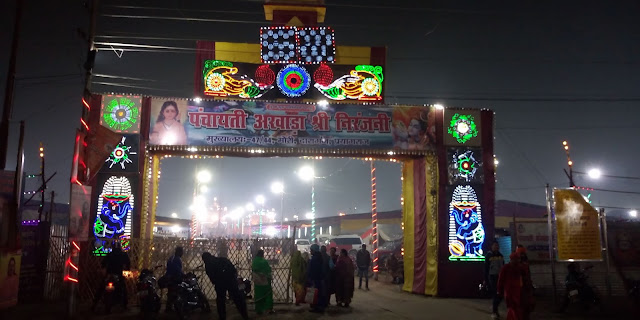