Almora is located on a ridge at the southern edge of the Kumaon Hills in Uttarakhand. I had been there long back, perhaps around 1995, so there was inclination to visit again. Also once I heard about the importance of Kasar devi temple, the visit had become a must. 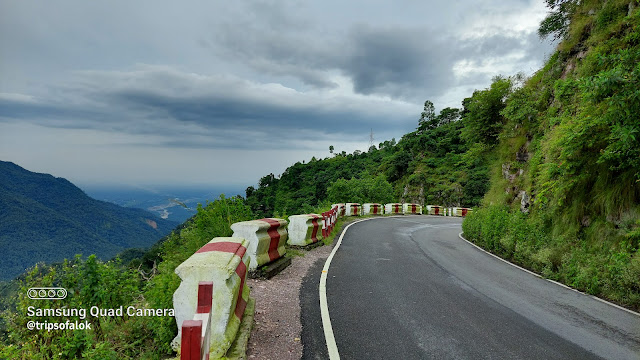 Almora was the seat of Chand kings that ruled over the Kumaon Kingdom. It is considered the cultural heart of the Kumaon region of Uttarakhand.

Almora got its name from Bhilmora, a kind of sorrel,(although some have tried to derive it from Berberis "kilmora") a short plant commonly found there which was used for washing the utensils of the sun temple at Katarmal. The people bringing the Bhilmora/kilmora were called Bhilmori/Kilmori and later "Almori" and the place came to be known as "Almora".

Almora was founded in 1568 by Kalyan Chand during the rule of the Chand dynasty.

To reach Almora, one need to take a train to Haldwani/Kathgodam and then a Cab/Bus to Almora.

We reached Kathgodam in morning. Its a small pictuersque station in backdrop of Shivalik ranges. We booked a cab from there and proceded to Almora.

On the way we stopped at Kainchi Dhaam. This place is sactified due to Neeb Karori baba, who stayed here for many years. There is a small temple and ashram here. 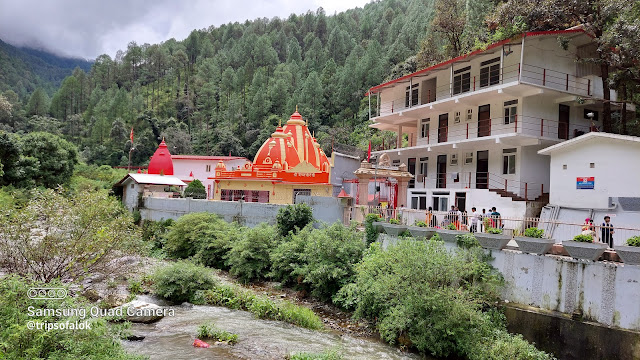 After spending sometime there, we took the road again to Almora.

According to local tradition, the earliest inhabitants in Almora were Tewaris who were required to supply Sorrel daily for cleansing the vessels of sun temple at Katarmal. Ancient lore mentioned in Vishnu Purana and Mahabharata present primordial accounts of human settlements in the city. The Sakas, the Nagas, the Kiratas, the Khasas and the Hunas are credited to be the most ancient tribes. The Kauravas and Pandavas of the Hastinapur royal family were the next important princes, who are said to have affected the conquest of these parts.

In 1791, the Gorkhas of Nepal while expanding their kingdom westwards across Kali River, invaded and overran Almora. Lord Moira, the Governor-General of India, decided to attack Almora in December 1814, marking the beginning of the Anglo-Gorkha war. The war that broke out in 1814, resulted in the defeat of the Gorkhas and subsequently led to the signing of the Treaty of Sugauli in 1816. According to the treaty, Nepal had to cede all those territories which the Gorkhas had annexed to the British East India Company.

Unlike the neighboring hill stations like Nainital and Shimla which were developed by the British, Almora was developed much before by the Chand kings. We reached Almora at around 12 noon. KMVN hotel is located at very suitable place with excellent views. After some rest we gotready to explore the place, with Jageshwar/Dandeshwar Temples were the first to visit.

Jageshwar Temples are a group of 124 ancient Hindu temples dated between 7th and 14th century and is located about 36 kilometres northeast of Almora. The temples site is at the confluence (sangam) of two streams Nandini and Surabhi after they flow down the hills in the narrow valley. 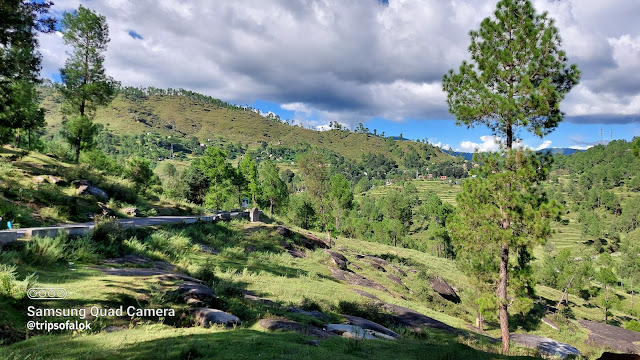 The temples at Jageshwar, believed to include the Nagesh Jyotirlinga. Though the temple of Nageshwar near Dwarika in Gujarat has also similar acceptance and belief. 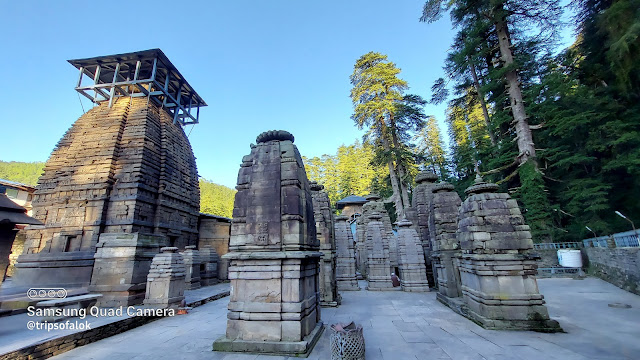 Jageshwar was once the centre of Lakulish Shaivism, likely by monks and migrants who left the places such as Gujarat and settled in the high mountains.

Jageshwar temple complex has many small and big temples, including of Shiva and other deities.

We visited the shrine and spend some time in serene place, feeling the vibration of devotion, continuing since over 1500 years!

Then we visited the Dandeshwar Temple complex. 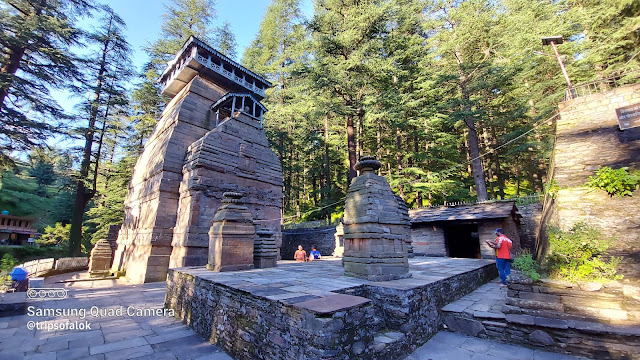 This temple is situated slightly upstream from the Jageshwar temple complex. The temple structure is similar. Though the shivalinga resemples with that at Kedarnath.

This temple is also surrounded by lush vegetation and is very calm and soothing place.

Happy, we took the road towards Almora, and on the way visited the Lakhudiyar Caves.

These ancient shelter are located in the Barechhina village at the banks of the Suyal River. On the walls of the caves are paintings depicting animals, and humans in black, red and white. There are also a few animal motifs, one of them closely resembling a fox. These paintings provide one of the richest experiences of Prehistoric art in the country.

Lakhudiyar is a rock shelter which means 'one lakh caves'.

Though I was not very happy wit maintenance of the place. The paintings must have been covered with glass etc to protect them from weather and miscreants.

Evening was approaching fast and so we decided to visit Golu Devta Temple at Chitai.

The famous Temple of Chitai Almora is dedicated to Golu or Goljyu Devta an incarnation of Lord Shiva in the form of Gaur Bhairav. Although there are many temples of Golu Devta in Almora but the Chitai Golu Devta Temple is the most sacred one. It is reputed to make every wish come true, provided the worshipper ask for it with a clear conscience. 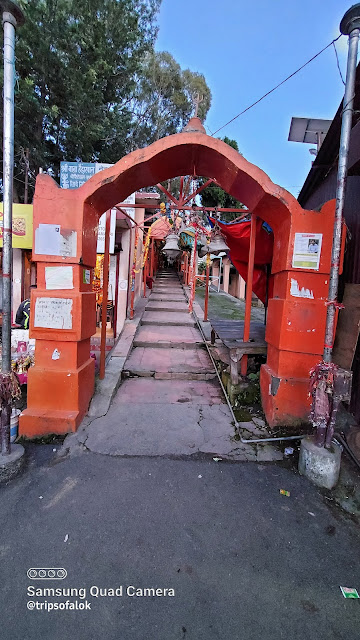 With heart full of devotion we visited the temple and be there for sometime. Temple has a very soothing aura.

Infinite numbers of bells and letters gives goosebumps to see the belief of people and blessings of the lord.

This temple is surrounded by a dense forest of Mimosa and Chir.

As we retuned back towards Almora, there is another small temple of Golu Devta. We visited that as well and then came back to town.

Late evening after dinner we took a walk towards the Bright End Corner or Viveknanda Ashram. Sunrise and Sunset are said to be very beautiful from here. A large statue of Swamy Viveknanda is also located there.

Early morning, we took another walk to Vivekananda Point. As Sun was rising, the distant peaks of Trishul Mountain was glowing in golden hue. It was very beautiful and calm atmosphere there.

Then we were back to hotel and after taking breakfast, we started for further exploration. 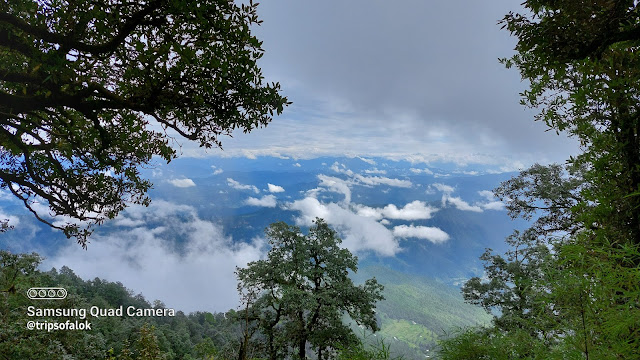 Perched at an elevation of 2420 metres, Binsar is known for offering spell-binding views of the majestic Himalayan peaks such as Chaukhamba, Nanda Devi, Nanda Kot, Panchachuli, and Kedarnath. The main attraction of Binsar is the 300 kms of majestic and panoramic view of Himalayan peaks from Binsar Zero point. 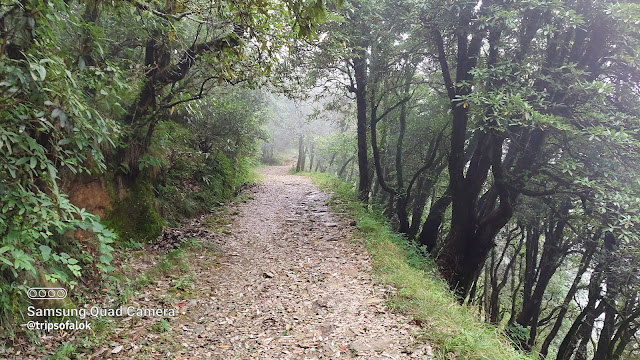 Museum was closed due to Pandemic and we started towards a 2 KM trek to reach Zero point.

Binsar was the erstwhile summer capital of the Chand Dynasty rulers, who ruled Kumaon from the 7th to 18th century AD. Situated at the height of 2,420 m, the sleepy and picturesque hamlet is one of the most scenic locations in the Kumaon hills. Binsar was named after the Bineshwar Mahadev temple dedicated to Lord Shiva.

The trek goes through dense vegetation and is very refreshing. It is advisable to move in a group and not to venture away from main route.

The trek took us to Zero Point Tower. In a good weater, one can enjoy spellbinding views of the majestic Himalayan peaks such as Chaukhamba, Trishul, Nanda Devi, Shivling and Panchachuli. 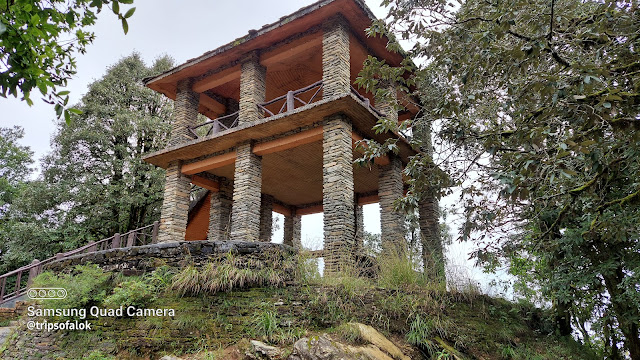 Unfortunately, when we were there it was dense fog and cloudy weather. In my view the best time to visit is September/October.

We retuned from Binsar and drove to Gairar Golu Devta Temple.

Along with Chitai, this temple is also very famous abode of Golu devta. It is located about 2 km from Binsar Wildlife Sanctuary and around 11 km from Almora. Blessed, we moved for Kasar Devi Temple. It is a very powerful place for meditation and as per research, one of the few places around the globe where the high energy level of the place, pushes the seeker easily into meditation. 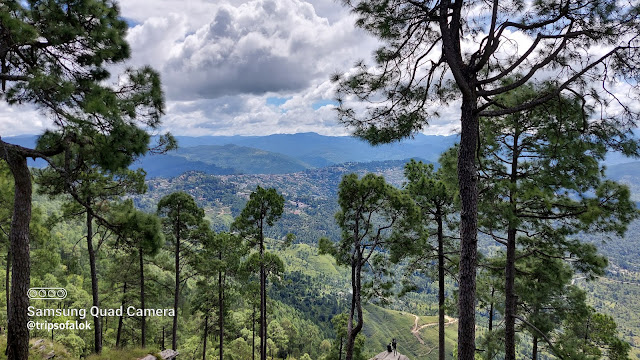 Kasar Devi first became known worldwide when in the 1890s, Swami Vivekananda visited and meditated here. Walter Evans-Wentz, a pioneer in the study of Tibetan Buddhism, who later translated The Tibetan Book of the Dead, also stayed here for some time.

Then in the 1930s, Danish mystic Sunyata Baba (Alfred Sorensen) came here and lived here the over three decades, as did Ernst Hoffman, who became Tibetan Buddhist Lama Anagarika Govinda and Li Goutami. This led to a series of spiritual seekers from the west, visiting them. In 1961, Govinda was visited by Allen Ginsberg, Peter Orlovsky and Gary Snyder. 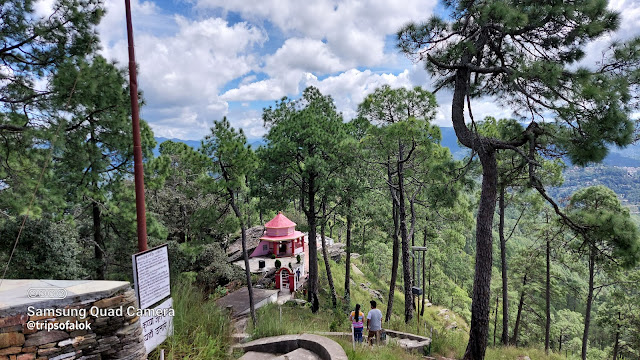 The area here is home to deodar and pine forests. It also provides views of the Himalayas from Bandarpunch peak to Api Himal in Nepal.

The main shrine of Devi is situated inside a cave like formation by the huge rocks.

It was an amazing experience to be here.

There is a small zoo also at Almora. It requires a lot of walk inside. Famous are Leoprad, White Monkey and Himalayan bear. Most of the leopard housed here are those who became man eaters and then caught and brought here.

We visited the place quickly and then took the road to Katarmal Sun Temple.

Katarmal is located at a distance of about 12 km from Almora. We have to walk about 1.5 KMs from Kosi village to reach the temple. 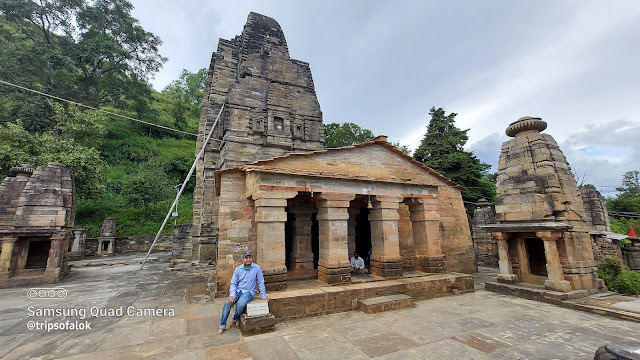 The Sun temple here was constructed by the Katyuri Kings in the 9th century CE. Katarmalla, a Katyuri king constructed this temple, which has 44 smaller temples around the main deity of Surya, which called as Burhadita or Vraddhaditya. Other deities like Shiva-Parvathi and Lakshmi-Narayana. are also established in this temple complex.

The carved wooden doors and panels were transported to the National Museum, Delhi, after an idol from the 10th century was stolen. 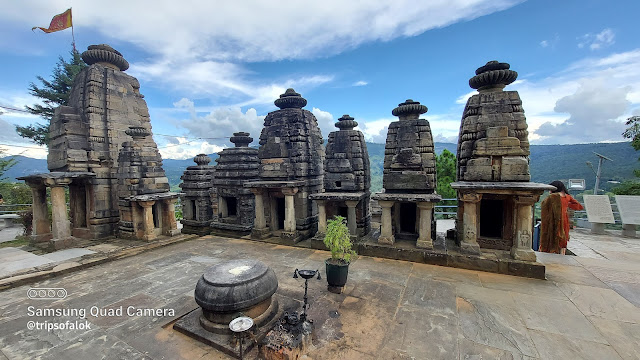 It was late afternoon, as we started back to Almora.

Evening we spend in Almora Market. There is a famous Nanda Devi temple here, which we visited as well. 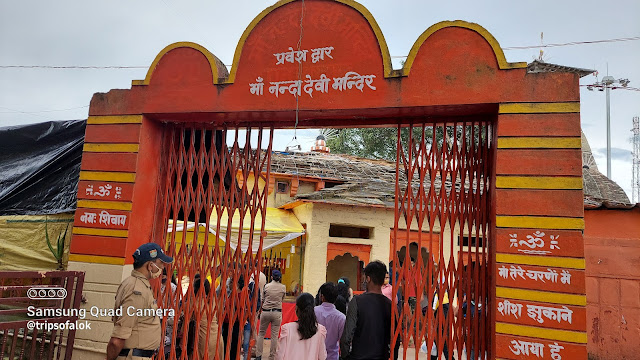 Nanda Devi is considered to be the "Destroyer of Evil" and the savior of the devotees. This temple is dedicated to Goddess Parvati. Every 12 years, Nanda Devi Raj Jat is the most popular celebration of the area where devi Nanda, in the form of a sheep, decorated with ornaments, food, and clothing, is sent to her home Trishul peak with music, local folk songs and dances.

The temple dates back to more than 1000 years and is built in Kumaoni-style architecture. The idol of the goddess Nanda is a huge monument with a stone crown encircled by a wooden roof. 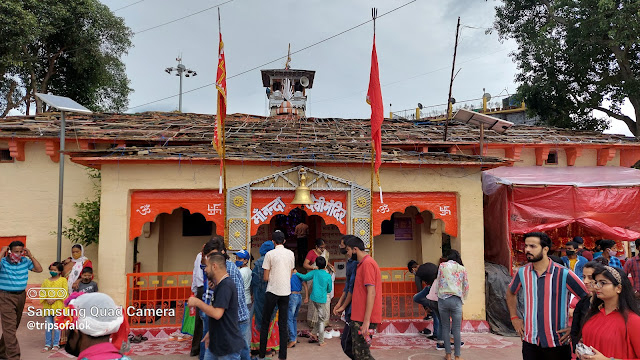 Market has a famous sweet shop of Mohan Singh Rautela. We purchased Bal Mithai and Chocolate mithai from there.

Next day morning, we took road for Nainital and then towards Kathgodam to take train to home sweet home!