We travelled to Shvanasamudram on 22nd September along with Ashutosh Pandey and his family. For me this was going to be a very very memorable trip as it was first outside Bangalore trip for my new Alto. 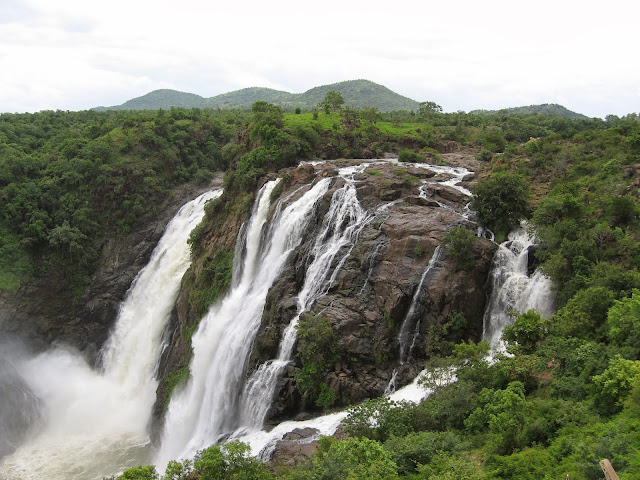 Friend Ripul Ranjan Mishra and his family were also with us in their Zen.

We took the route Bangalore-Kanakpura-Malavalli-Shivanasamudram. The road is good till Kanakpura but after that it is very bad on few places. It was my first long drive so I was little tired. But Shivansamudram fall was on its full glory due to good rain fall this year.

With this route (through Kanakpura) the distance from Bangalore to Shivanasamudram is about 120 KMs.

Shivanasamudra is a small town in the Mandya District of the state of Karnataka, India. It is situated on the banks of the river Kaveri and is the location of the first Hydro-electric Power station in Asia, which was set up in the year 1902. Asia's first hydro-electric power stations, still functional, is located at the waterfall. This station was commissioned by the Diwan of Mysore, Sir K. Seshadri Iyer. The electricity produced here was initially used in the Kolar Gold Fields. Thus, Kolar Gold Fields became the first town in Asia to get hydro electricity.

The island town of Shivanasamudra divides the river into twin waterfalls. This creates the fourth largest island in the rivers course.

The first one (Gagana Chukki) has a Dargah near it. The water flow here is quite rapid and it is dangerous to go down here, especially during monsoon season, when the river is in its fullest. Some warning boards are there to caution the people. But sad part is that, still people, particularly youngsters, in their enthusiasm, do not pay attention to these and go down very close to falls, which is very dangerous.

If the conditions are right (not too much water) then you can walk/trek all the way down to the Bharachukki falls. Steps are there. Some time back when I had visited this place with friends Pundareeka, Anil and Pravin, we had visited this falls also.

We started at around 9 in the morning and reached Shivansamudram at around 1 PM in afternoon.

There is one small restaurent, where we took lunch.

For return Journey we started at around 3 PM. We reached Banashankari at around 6 in the evening but took more than 2 Hrs to reach our home from there because of traffic jams. we reached home at around 20:20 hrs.