I am not sure from where I first heard about Melkote. But since then, I was planning to visit.

Recently my colleague, Deepak Kumar mentioned about it as well as elder brother of My Land Lord also told me stories behind the place.

Tuesday, 26th January was off as becuase of Republic Day. Though till morning, I was not in full mood to visit. But By Lord's grace, we planned and started.

Melkote (Melukote) is about 145 KMs from Bangalore. It is in Pandavapura taluk of Mandya district, situated on rocky hills known as Yadavagiri or Yadugiri overlooking the Cauvery valley.

We took the Mysore road from Bangalore. Just after Mandya, there is a right turn which goes to Melkote.

We did a mistake here. Though I have seen the sign-board many times, (which indicates the turn to be taken for Melkote), while visting Mysore earlier, somehow this time I missed the sign board and proceeded further. When I crossed Srirangapattanam, then I realised that I have already travelled quite far in wrong direction. Then I was in two minds, whether I should ask somebody and find out the correct path, or should I proceed to Ranganthittu, where my kids can play or should I go to Shri RanganathaSwamy temple at SriRangapattanam. The reason was that it was already around 11:30 AM and I was not sure if we will be able to make it to Melkote before the temple gets closed in the noon.

But my wife asked me to proceed to Melkote. I asked a few passers by and so finally we were on our way, reaching the Melkote at around 12:30 PM. Because I missed the early sign-board, costed us about an hour, an extra 45 KMs travel.

I want to inform, if somebody wants to visit Melkote from Bangalore, then be careful for sign-board for Melkote/Pandavapura near Mandya. Just after Mandya, you need to take right turn. Otherwise enquire about it at Mandya. People coming from the direction of Mysore needs to take left turn after SriRangapattanam. I heard that there are regular buses from Mandya to Melkote.

As we had missed the correct road while coming from the direction of Bangalore, hence we took the route, which is taken by vehicles coming from the direction of Mysore. On this route, we crossed the small town of Pandavapura. Legend is that a demon "Bakasur" used to live there and villagers had to feed him daily. He used to kill and eat that human also who used to go near to him to give food. When Pandava brothers during their exile, visited this place, the villagers told them about their plight. Bheema killed the demon and hence villagers got rid of him.

Just before Melkote, there are a few sharp bends and ascend like in hills. One has to take precaution here, keep your vehicle NOT above 40 KMPH during this stretch.

Early in twelfth century, the great Srivaishnava Saint, Sri Ramanujacharya took up his residence and lived here for about 14 years. Hoysala king Vishnuvardhana, became a follower of the Acharya, and granted the fertile tracts of land in the neighbourhood, especially of the Ashta Gramas, on either bank of the Cauvery.

Cheluvanarayana Swamy Temple
The principal temple is a square building of large dimensions but very plain, dedicated to Lord Cheluva-Narayana Swamy or Tirunarayana. The utsava-murthi, which is a metallic image, representing the deity which is called Cheluvapille Raya or Cheluvanarayana Swamy, whose original name appears to have been Ramapriya.

Legend has it this image of Vishnu was held in worship by Bhrahma. It is believed that the festival image Sampatkumara was worshipped by Rama and his son Kusha; hence the name Ramapriya. Legend has it that Krishna installed this image here at Melkote.

But it is believed that the Temple here is much more ancient.

The temple is richly endowed having been under the special patronage of the Mysore Kings. On one of the pillars of navaranga of the Narayanaswami temple is a bas relief about one and a half feet high, of Raja Wodeyar, standing with folded hands, with the name inscribed on the base. He was said to be a great devotee of the presiding deity and a constant visitor to the temple. A legend says that on the day of his death, he was observed entering the sanctum and was seen no more afterwards.

Legend has it that during the Muslim raids of South India, the festival image of Melkote was stolen and taken away and Ramanujacharya restored it from the court of the ruler. It is said that it a muslim princess had gotten attached to the image of Selvappillai and that being unable to part with it, she followed the Acharya to Melkote and then merged into the shrine there. In honor of this, there is an image of Bibi Nachiyar here.

The idol of Merciful Lord is very attractive and gave us peace and joy. We spent some time in hall just in front of Sanctum sanctorium.

Then we visited other shrines in the temple, including the shrine of Mother Lakshmi.

Tender Coconuts quenched our thirst on that hot afternoon as we came out of the temple.

There was some movie shooting going on there just outside the temple. A lot of crowed had gathered over there. We also saw the beautiful actress and the shooting for a few moments before proceeding to our next destination at Kalyani Teertham.

Kalyani
This is nearby to the main temple. The steps leading to water and the mantapas built all around looks very beautiful.

Then we proceeded to Yoga-Narasimha Swamy Temple.

Yoga-Narasimha Swamy Temple
On the top of the nearby hill is an impressive temple of Yoga Narasimha. By vehicle we can cover about half the journey ascending through narrow lanes. Rest of the distance one has to cover on foot. With my son in my lap even that distance of about 150 steps (my guess...did not counted) was a little tedious. But by Lord's mercy things went smoothly. My daughter bravely did that task on her own and so did not bothered her mother much. 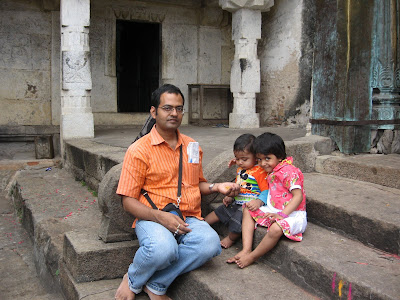 Legend is that it is one of the seven Narasimha "Khetras". It is believed that the image of Lord Yoga Narasimha was installed by Prahlada.

After having darshan we just roamed around there for some time. The view is fascinating from that height. We also took the famous Melkote Puliogare as prasadam. It was very tasty. Later after coming down, we took more of that.

We started back after taking puliogare. This time we took correct path, from Melkote to Mandya and then to Bangalore. Near Bidadi, we stopped for some refreshment, before reaching home in evening fully tired but happy.

Kids were not that happy as still they are too young to understand the sanctity of the place. At Yoga Narasimha temple, I reminded my daughter about the story of Prahalada and she happily chanted "Hare Krishna".