The plan to visit Pondicherry (Puducherry) just popped up suddenly. We are making plans to visit Kodaikanal during weekend of 18th and 19th of February.

We could not get train tickets as well as sleeper bus ticket so Kodaikanal plan was postponed.

Next place came in mind was Pondicherry. 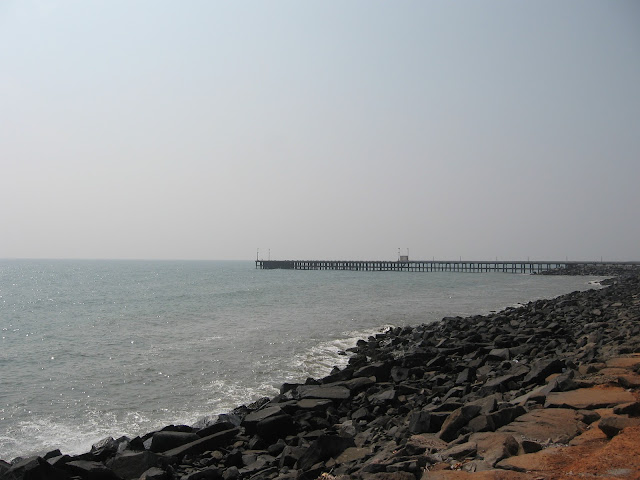 We booked a Qualis and Saturday early morning left for Pondy.

Pondicherry is also known as Puducherry or "New Village" in Tamil.

Pravin and his family also accompanied us.

This was my second trip to Pondicherry. First visit, I had took with friends, Nitin Manohar Agarwal and Anand Swaroop Garg, in perhaps 2002 or 2003.

The total distance from Bangalore to Pondicherry is about 350 KMs. And it takes about 7-8 hours by road. There is also an overnight train available. Which I feel, is a better option.

We got up early morning, though by the time we left Bangalore, It was already around 7 AM.


Hosur Highway is excellent and the Qualis just ran smoothly. At Krishnagiri, we took left towards Chennai Highway. This turn is at second overbridge at Krishnagiri.

It was breakfast time and we treated ourselves with hot Idlies and delicious Dosas.

From this turn about 500 meters, again we need to take a right turn towards Pondicherry. Take care not to overlook the signboards.


The road from here is not good. Particularly till Thiruvannamalai, it is very bad with lot of potholes, who appear suddenly. The road passes through rural area. All these put a limit on speed as we have to be very cautious.

Thiruvannamalai is very famous for Arunachaleshwar Shiva Temple and as the abode of Raman maharshi and Yogi Ram Surat Kumar.


I have already visited this holy place with grace of Mahadev. We decided to visit the temple, while returning the next day.

The road is little better as we crossed Thiruvannamalai.

Next place of interest is Gingee, about 35 Kms from Thiruvannamalai. This place is famous for its formidable fort. I have visited this along with friends Anil and Pundareeka during one of our visits to Thiruvannamalai, perhaps in 2003 or 2004.

Click here to read more about my visit to Thiruvannamalai and Gingee. 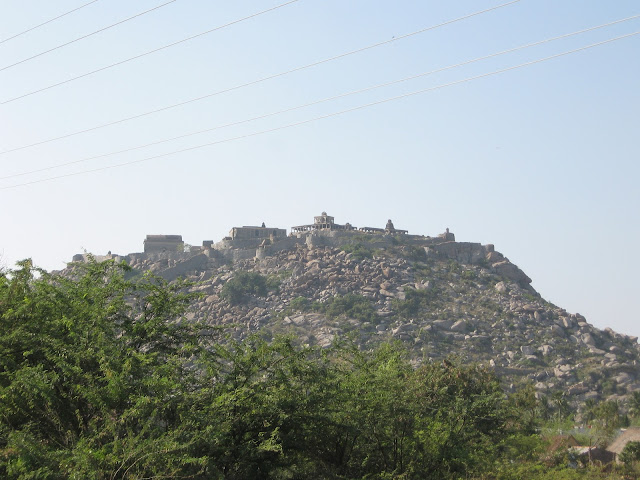 I had observed that the fort is not in good shape, the archaeology department should work further to make sure to preserve such monuments for our future generations.

Finally around 3 PM, we were at Pondicherry.


The History of Pondicherry can be traced back to the 2nd century. The Periplus of the Erythraean Sea, of the early 2nd century, mentions a marketplace named Poduke, which G.W.B. Huntingford identified as possibly being Arikamedu, about 2 miles from the modern Pondicherry. Huntingford further notes that Roman pottery was found at Arikamedu in 1937, and archeological excavations between 1944 and 1949 showed that it was "a trading station to which goods of Roman manufacture were imported during the first half of the 1st century AD.


We took rooms at Hotel Devis Grand on Lal Bahadur Shastri Street . It is also know as Bussy Street. The rooms were good, but I felt a bit costly.

It was quite hot afternoon and after taking some rest, we proceeded towards the restaurant for late lunch.


It was time to explore Pondy.

We headed towards Auroville. The plan was to visit, Auroville and then the Aura beach.

Auroville - or the ‘City of Dawn’ - was conceived by the Mother, the spiritual collaborator of Sri Aurobindo Ghosh. The idea is to build a futuristic city where people can live together in peace and harmony, above all creeds, all politics and all nationalities.


Its Charter says, “To live in Auroville one must be a willing servitor of the Divine Consciousness”, and describes it as “belonging to nobody in particular, but to humanity as a whole”; as a place “of constant progress”; and as “a bridge between the past and the future.”

It is located around 8 kms from Pondicherry and was designed by the French architect Roger Anger. Nearly two-thirds of the residents are non-Indians. 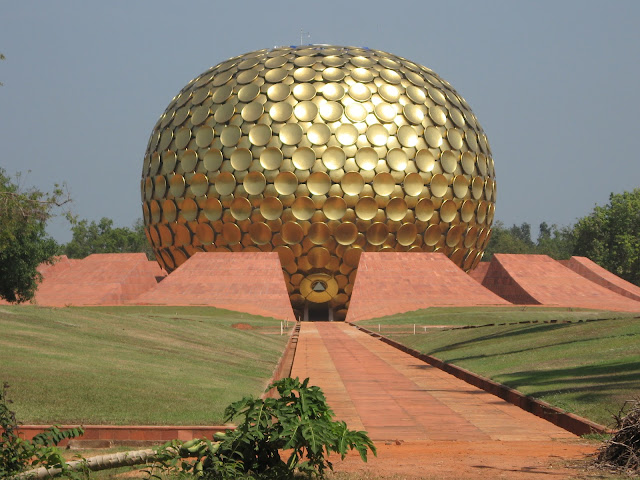 The central Matrimandir, which is not a temple but a place for individual silent concentration, is set in an area of 62 acres at the centre of the emerging township, and is seen as “a symbol of the Divine’s answer to man’s aspiration for perfection. Union with the Divine manifesting in a progressive human unity.”

During the inauguration ceremony of Auroville on 28th February 1968 , soil from 124 countries was placed in a lotus-shaped urn and mixed to symbolize universal oneness. This urn is today sited at the centre of an Amphitheatre in the Matrimandir Gardens.

By the time, we reached Auroville, it was closed for visitors and hence we headed towards Aura beach on other side of road.

The beach was clean and not much crowded, hence a very nice place to spend quality time with family and friends. The sea was a bit rough, perhaps warning us to remain away. We respected his orders and spend some time chatting, photographing and playing with kids.

As it became dark, we headed towards hotel, but in between, found time to do some shopping near Auroville.

We came to hotel and after a good dinner, proceeded towards bed for a good night’s sleep.

Sunday morning, we got up early and proceeded towards Arulmigu Manakula Vinayagar Temple. This temple dedicated to Lord Ganapathi is one of the most famous shrines at Pondicherry.

O Lord Ganesha, you are with huge body and curved trunk and with the brilliance of a million Suns. Please make all my work free of obstacles, always.

This temple is more than 300 years old and has a golden spire and walls portraying forty different forms of Ganesha. The temple also has a smaller shrine dedicated to Lord Murugan. The temple compound also plays host to ‘Lakshmi’, the temple elephant, who uses her trunk to dispense blessings.

There is also a famous Varadaraja Perumal Temple, which is located on M.G.Road, this is believed to be the oldest temple in town, dating back to 600 AD. We could not visit this sacred place because of paucity of time.

After getting blessed with darshan of Lord Vinayaka, we proceeded to nearby Shri Aurobindo Ashram.

The Sri Aurobindo Ashram is one of the well known places at Pondicherry, with devotees from India and all over the world flocking to it for spiritual salvation. 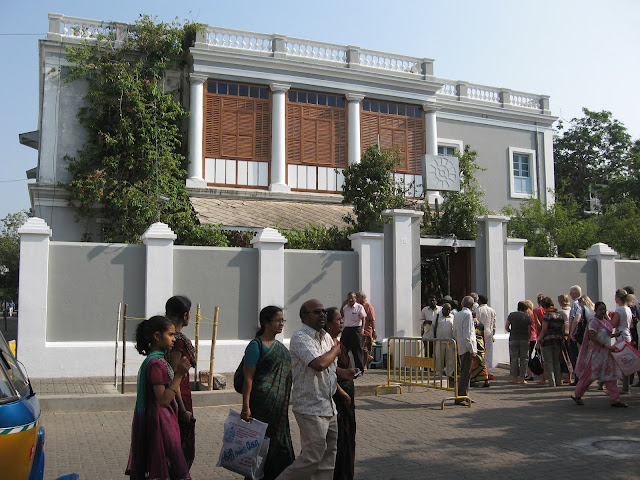 The Ashram was set up in 1926 by Sri Aurobindo Ghosh, one of India’s greatest philosopher-poets, who originally came to Pondy to escape persecution by the British. It was after arriving in puducherry, that he was drawn into the spiritual realm and discovered the power of yoga.

The mother or Mirra Alfassa, who was French by birth, was so inspired by his philosophy that she came and stayed on in Pondicherry and was instrumental in establishment of the ashram.

The ashram’s influence can be felt in most of Pondicherry. The main ashram building is where the mortal remains of Aurobindo and the Mother are kept.

Now it was time to have some roaming on The Beach Road (the Promenade).

This 1.5 km long road running along the beach is the pride of Pondicherry. On the sea front, there are several land marks. It starts with the statue of Dupleix. Marquis Joseph Francois Dupleix was the governor of Pondicherry between 1742 and 1754. 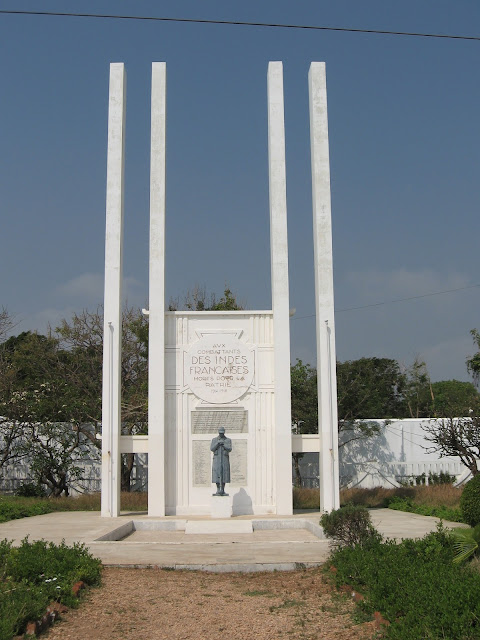 Next are the War memorial, the town hall, the old light house and the statue of Mahatma Gandhi. 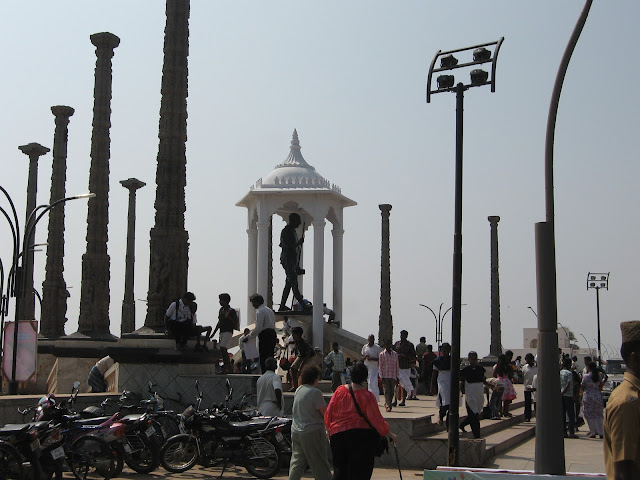 The four-meter statue of Mahatma Gandhi is surrounded by eight magnificent granite pillars, which were said to be brought from Gingee fort.

The beach road is a nice place to just roam around in evening.

We were hungry as had not taken the breakfast so far. I found it strange that in Pondicherry there are very few places to get the breakfast. We roamed across many streets but all the hotels and restaurants’ that we found, were serving only lunch and dinner.

Finally we found the “Indian Delight” near our hotel, to pacify our hunger through Lemon Rice and Sambar Rice.

We packed our bags and started towards the Auroville, plan was to visit Auroville and then from there to take the road to Bangalore.

It was quite hot noon. Auroville has a lot of greenery but a lot of it got damaged during recent cyclone in December end.

Our destination was the Matrimandir, which is a meditation center.

MatriMandir remains closed on Sunday afternoon. Unfortunately by the time,w e reached there it got closed. So he had to satisfy ourselves with the glimpse of it through some distance. It was beautifully designed and is at the exact center of the auroville township.

Now we took the road to Bangalore.

By around 4 PM, we were at Thiruvannamalai so as decided the day before, thought of taking the darshan of Shri Arunachaeshwar Mahadev.

This temple is said to be the largest Shiva temple.

This ancient temple represents the “Fire” among the Panch Maha Bhoota. Shiva is said to have manifested here in the form of massive column of fire, whose crown and feet could not be found by the Bramha and Vishnu. A celebration of this manifestation is seen in the age old traditions observed during the festivals of Sivarathri and Karthik Deepam. 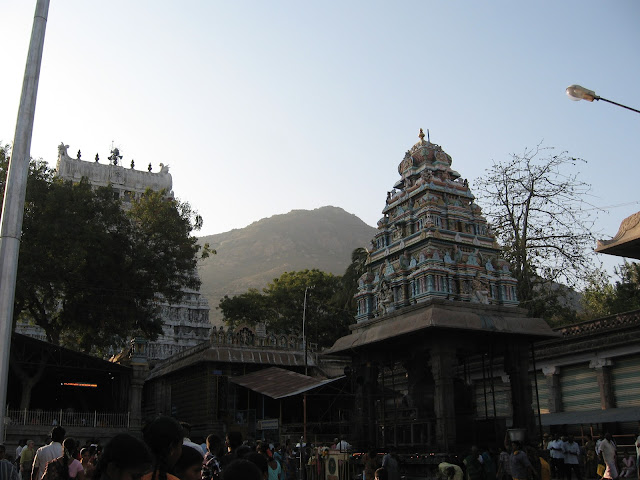 O Girisha, Brahma trying above and, Vishnu trying below failed to measure Thee who took the form of a pillar of fire. Afterwards when they praised Thee with great devotion and faith, Thou revealed Thyself to them of thy own accord, indicating whether Thy worship can go without bearing result?
(Shiva Mahimn Stotram, Shloka 10)

Click here to read more about my visit to Thiruvannamalai.

The Pancha Maha Bhoota places are as below:

It was eve of Shivaratri and so quite a rush inside temple. We took special darshan ticket of Rs 20/- and so were a little more privileged than others to have a darshan of God of Gods, Lord of Lords, Dev-adhi-dev Mahadev.

After being blessed with blissful darshan, we took some snacks outside temple and again boarded the vehicle on our way to Bangalore.

We were at home by around 12 midnight.

1. Aurobindo Ashram is open to the public daily between 08-1200 hrs and 1400-1800 hrs. Children below three years of age are not allowed into the Ashram.
2. Evening you reserve to roam at the Beach Road.
3. Auroville Matrimandir is closed for visitors on Sunday afternoons.
4. Except the beaches (Aura, Serenity etc) and the Auroville, all other site seeing at Pondy are located around the beach road. Walking is the best way to explore them.
5. Due to paucity of time, we could not visit Bharathi park and Pondicherry Museum. The park is a place to visit particularly if you have kids with you. I had visited the park in my first visit to Pondicherry.
6. The Museum has a collection of rare bronzes and stone sculptures from the Pallava and Chola dynasties and artifacts excavated from Arikamedu. Also on display is Dupleix’s bed.
7. Best time to visit Pondicherry is from November till February.