The western ghat mountains and its offshoots are home to one of the most pristine environment in India. They cater to a wide variety of flora and fauna besides attracting rains and replenishing the population with water and food.

The Anaimalai Hills is a range of mountains in the Western Ghats in Tamil Nadu and Kerala. The name "Anaimalai" derives from the Tamil and Malayalam word 'Anai' meaning elephant and 'Malai' meaning hill, thus Elephant Hill. The highest peak of the Anaimalai Hills is Anamudi, (2,695 meters (8,842 ft)), located in the Idukki district of Kerala. The lower slopes of hills now have coffee and tea plantations as well as teak forests. 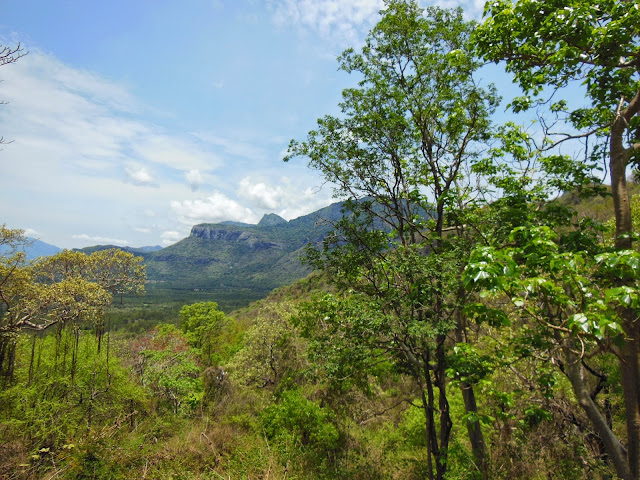 As I am fond of forests and mountains, a trip to Anaimalai was on cards for sometime. Summer season is time, when my wife and kids are away to native place, I can freely roam to some of my choicest destinations.

TopSlip is very convenient place to stay and enjoy the nature at Anaimalai Forests.

I called Anaimalai range forest office at Pollachi and requested an accommodation at TopSlip. They confirmed the booking for 25th April, Saturday.

The route from Bangalore is Bangalore - Coimbatore - Pollachi - Topslip

Topslip is located near Pollachi (near Coimbatore) at an altitude of 800 feet from the sea level on the Anaimalai mountain range. It is a part of the protected Indira Gandhi Wildlife Sanctuary.

I booked train from Bangalore to Coimbatore and return, well in advance. Later when friend Jitendra wished to accompany me, he had to rely on bus.

My train got late on friday evening and reached 90 minutes late to Coimbatore on Saturday morning. Jitendra was already there since 6 AM and had proceeded to Pollachi by bus.

Getting down from train, I exited through Platform 1 and took a city bus going towards right side to Ukkadam Bus stand to get a bus to Pollachi.

Pollachi is about 40 KMs from Coimbatore. It took a little over an hour to reach there.

From Pollachi, we need to go to TopSlip, which is further 35 KMs away. Taxis were quite costly but a few Govt buses are available from "Kerala Bus Stand" at Pollachi. Next bus was at 1145 AM so we waited for that.

While I was on way to TopSlip, my mother called me and told about devastationg earthquake at Nepal. I was very sad and prayed krishna for help to our Nepali brothers and sisters.

The last stretch of ghat roads are beautiful, though the road was not in that good condition. The fresh breeze took away all the tiredness.

At around 1 PM we were at TopSlip. 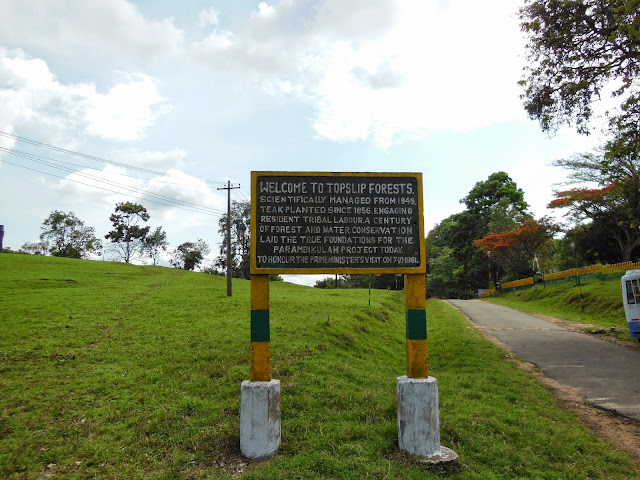 Topslip is blessed with a salubrius climate and a vareity of flora and fauna. It stands majestically with blue mountains and green forest all around.

Reaching there we got our Bamboo hut and quickly a hot lunch refreshed us again.

I enquired about activities. It included forest safari and also forest trek. We decided to take safari that evening and then a trek through forest the next morning.

Most animals are nocturnal in nature and so its a bit difficult to catch them in day. Mostly spotted deers and occasionally Bisons or Elephants can be seen in day.

There is an elephant safari also, which is quite famous among visitors. My initial impression was that it will take us inside forest,but it was just a fun ride nearby.

I was more interested in taking walk around the camp and then waited for safari.

I always love a forest safari. The wanderings through jungles is quite exciting always. Though if forest department can introduce battery driven vehicles, it will be great as the current vehicles make a lot of noise and make sure that forest animals remain away.

Except Bison, Barking Deer and Spotted deer, we could not glimpse anything else. It was later fatrenoon. The best time to take safari is late evening around 530/6 PM or early morning.

During Safari, we spotted barking deer, spotted deer and Bisons. Main aim to visit a safai is always to get a glimpse of tiger, though I know its pure luck, which has evaded me so far in this aspect.

There is a elephant training camp which came at the last stretch of safari. This is Kolikamuthi Elephant Camp. Here you can go only as part of safari. Individually its allowed only with permission from forest department.

Elephants are trained and housed here. There are malaisar tribe families lodged in this area. They are said to be professional elephant trainers.

I clicked a tusker who appeared from the forest behind the camp and then entered into the pool. The mahaout rubbed and bathed him. On the other side elephant "Lakshmi" was carrying some green foliage in her trunk. She was kind enough to allow us some camera shots in close proximity with her.

We also saw the food being prepared for them with jaggery.

Then we took the return route and in next 45 minutes were back to Topslip.

Near our hut, I observed a couple of Niligiri Squarril playing on trees. These are black in colour and bigger in size than normal squarril that we see otherwise. I had spotted a few at Kulgi Camp, Dandeli as well.

I tried to catch them in my camera but failed due to agility of these magnificent creatures.

In front of our Bamboo hut, there was an open lawn and a grand mansion, perhaps for VIPs. In the evening a lot of spotted deer were seen grazing there. They kept a comfortable distance from us. The surround view from this mansion was excellent as it is at a height from other nearby places. 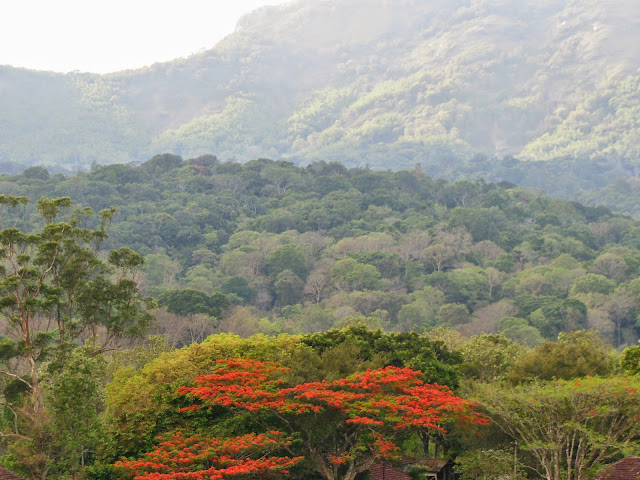 Late evening we spotted a couple of Nilgiri Langurs, who were playing on road and not were afraid of human presence.

There is also a small "Eco Shop", from where I purchased some tea.

We took the dinner at around 8 PM and retired for the day. I had forgotten to carry the torch, but home made torches by Jitendra helped a lot. I have become a fan of his electronic and mechanical creativity.

Though I wanted to remain awake to hear the Jungle Lore at night. During night the Jungle becomes alive and I am always excited to be in midst of jungle to feel that aliveness. But badly tired, I slept almost immediately. Morning I wake up at around 5 AM. I heard a couple of calls from barking deer, other than that the Jungle was silent.

I came out of hut and roamed the surrounding area, the jungle was full of morning mist. It was utter blissful. 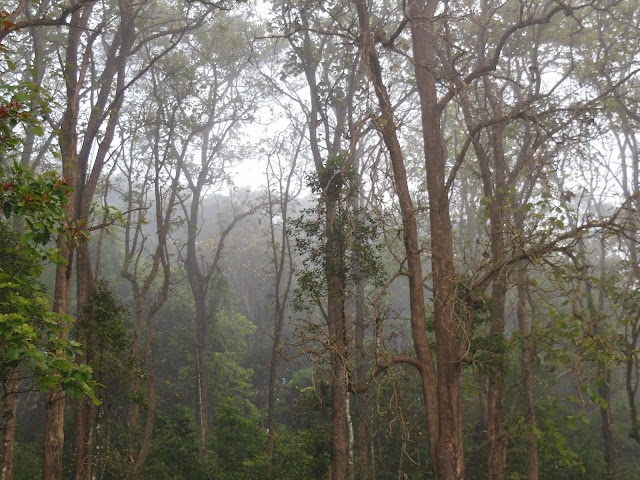 We had two options for today. Either to take a trek through nearby forests or take a trip to nearby Parambikulam Tiger Reserve, which is located in Kerala.

After some thoughts, we decided to take morning 730 AM bus to Parambikulam. 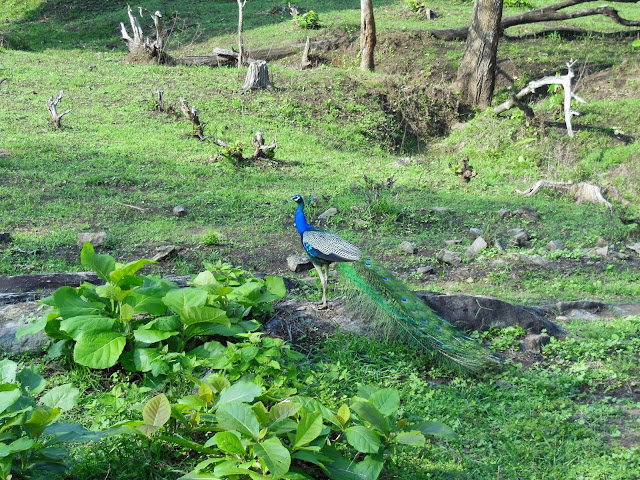 Parambikulam Tiger Reserve is one of the most conserved ecological area of Western Ghats, extending into Kerala and Tamil Nadu. The flora and fauna here are protected due to total protection and minimal human interference. The thick, opulent habitat of the sanctuary makes it an abode for wildlife.

The route is through thick forest. As we reached Anappady, there was a rush of tourists for Safari there. Luckily we get tickets for a bus some 15 minutes later.

One thing to be noted here is that access to Parambikulam is only through Topslip and thus from Pollachi (Coimbatore).

Parambikulam is in the Sungam range of hills between the Anaimalai Hills and Nelliampathy Hills.

The sanctuary is also the home of four different tribes of indigenous peoples including the Kadar, Malasar, Muduvar and Mala Malasar settled in six colonies.

There are also huts available, that can be booked in advance to stay. But as we had to take the return bus the same day, we were interested in Safari only.

Trekking in the forest is allowed with prior permission and needs to be accompanied by an experienced forest guide.

This safari, I was able to shoot Bison in my camera. So far I was unable to do so!

Again as expected the Tiger remained elusive to me.

The evergreen forest was thick and silent. I was not expecting Tiger to come forward and meet me, but the oxygen filled air and occasional sighting of herbivores elated the mood.

The safari trip is of about 3 hours, which covers a lot of forest area and 2 dams (Thunacadavu and Parambikulam Dams).

We took some refreshment at Parambikulam village. There was a memorial for achievement of 100% literacy of that village.

It is said that PM Nehru has visited this place sometime in 1962. One dilapidated children park in his memory remninds us that event.

There was a tree hut at Parambikulam village. It was quite interesting. I was not sure if its allowed for someone to stay there.

We also visited the Kannimara Teak Tree, which is said to be Asia's largest. It is near Thoonakkadavu village.


It is said to be about 460 years old and is worshipped by local tribals. 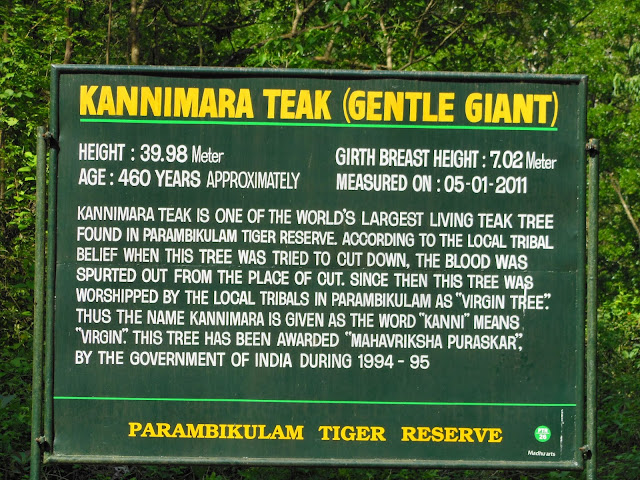 While returning, we also met with a herd of wild elephants, who were silently enjoing the jungle fodder.

Back at camp, We took Rice Sambar lunch at Anappady and then took bus back to Pollachi.

After getting down at Pollachi, as we had some spare time so decided to visit Aliyar Dam, which is on way to Valparai.

The view from Aliyar dam is just awesome. I was stuck by the beauty of nature here. There is a small park, but as we ascend the stairs to reach the upper road, the nature unfolds its beauty. The large water reservoir with mountains in background just mesmerize anyone.

I was busy capturing the moments in my Nikon, when suddenly the rain god strated showering bliss. All started running away to protect themselves from this bounty of nature, which comes to us in form of water. My blissful moments also got interrupted and we took a bus to Coimbatore for our forward journey.

Monday early morning, I was back to home sweet home after another blissful journey to Jungles!

How to book accomodation: