I came to know about Valparai sometime in January 2015, when while searching about Anaimalai wildlife sanctuary, I read about this place. 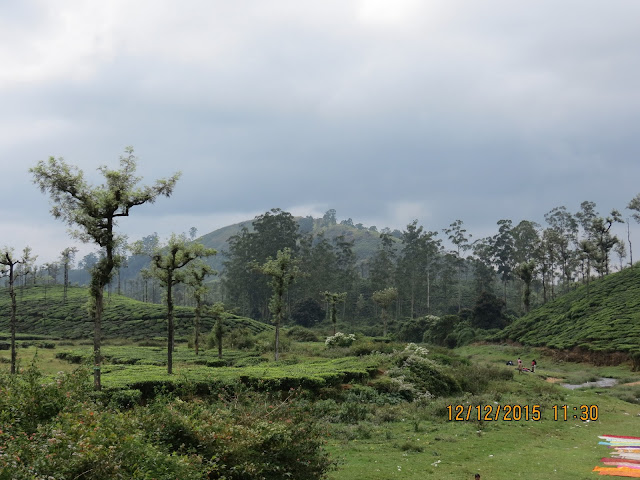 In summer of 2015, I visited Topslip and Parambikulam and also the Aliyar Dam. Valparai is about 60 KMs from there and then I decided to visit this place soon. 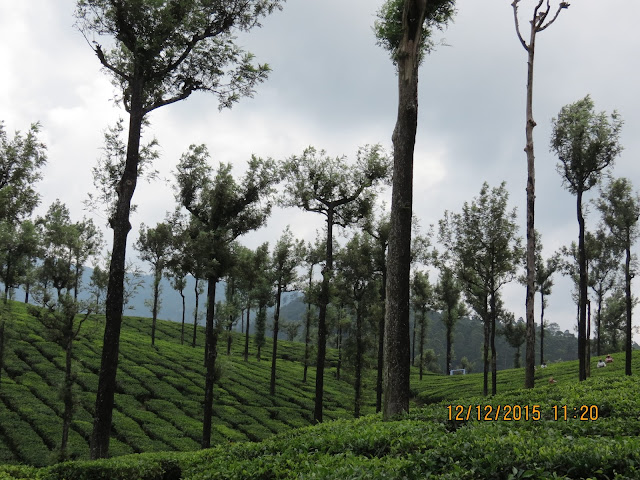 Finally a weekend of December took me to this beautful place.

Valparai is a small hill station in the Coimbatore district. It is located 3,500 feet above sea level, at a distance of about 100 km from Coimbatore and 65 km from Pollachi.

There are 40 hairpin bends on the way up to Valparai from Aliyar (or Azhiyar). 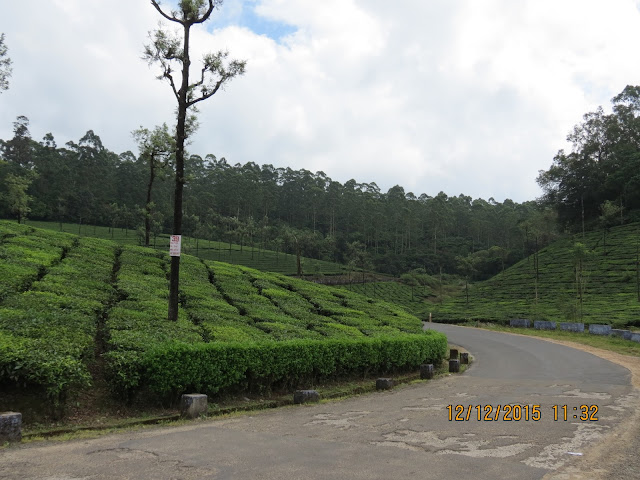 As I could not get train tockets to Coimbatore, I decided to take a bus to Pollachi and then another bus from Pollachi to Valparai.

Late evening bus from Bangalore reached Pollachi about 6 AM in morning. I took another Tamilnadu state transport bus from Pollachi to reach Valparai. 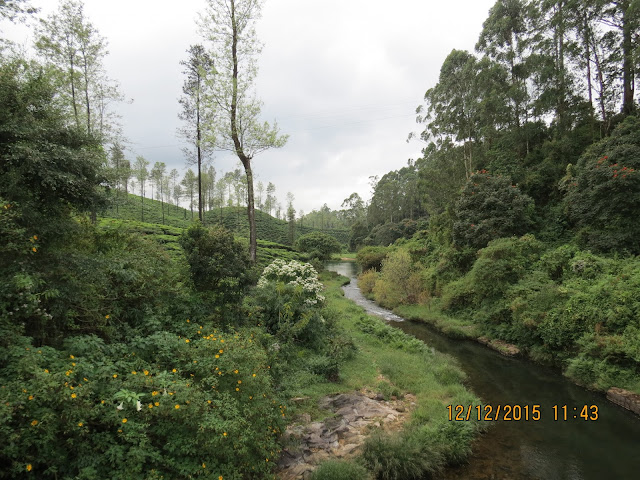 In Pollachi there are two bus stands, infront of each other. One bigger one facilitates the bus services for bigger cities etc. and another smaller one, more famous as Kerala bus stand takes care of services to places like Aliyar, Valparai, Top Slip, Parambikulam etc.

The route through lush green mountains is quite fascinating. A number of waterfalls on the way added to the attraction of the place and journey.This scenic drive passes through the Indira Gandhi Wildlife Sanctuary noted for elephants, boars, lion-tailed macaques, gaur, spotted deer, sambar, and giant squirrels. Water bodies at Monkey Falls and Aliyar Dam are also seen en route.

By around 9 AM, we were at this beautiful place. 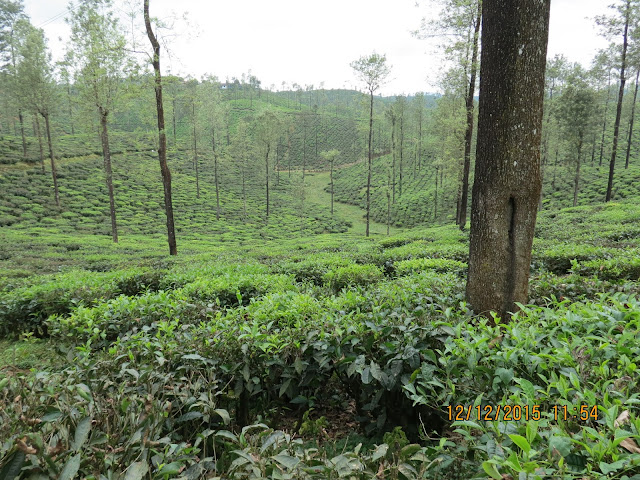 I had booked one room at Hotel Holiday Break. It is behind Gandhi Statue. There is no proper board and also not many people knew about the place. With some difficulty, I was able to locate the hotel.

Valparai has a few resorts and even fewer hotels. Hotel Holiday Break is one good option as its right in center of town itself. 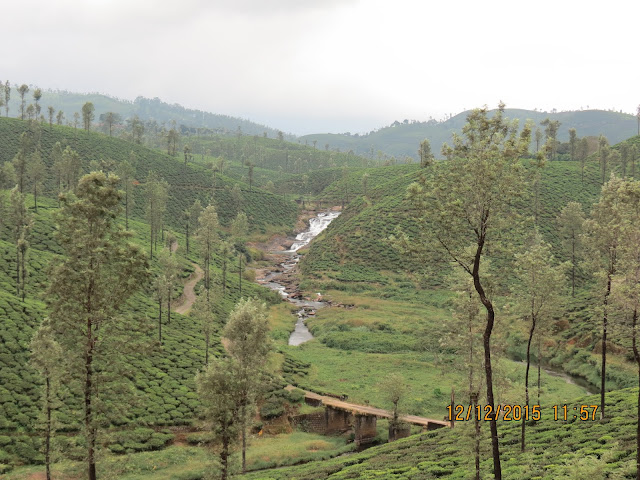 After getting refreshed, we took breakfast in a "restaturent" infront of hotel. I enquired at the reception about a taxi for sightseeing. They introduced me to CTC Mani, who was a retired from State Transoort corporation and we took his taxi to visit Valparai.

Valparai Hill Town is bounded by mountains, meadows, valleys and waterfalls etc. It has tea plantations everywhere and overall very serene place and soothing environment round the year.

In year 1846, Ramasamy Mudaliyar started coffee plantation here. In 1864, the Karnatic Coffee Company began their coffee plantation here. In 1890, Mr W. Wintil and Mr Nordan bought a huge portion of land in Valparai from the Madras State Government under the British Raj. Wintil deforested the area and planted tea and coffee. He was assisted by Carwer Marsh. Carwer Marsh was hardworking and built a close relationship with the local people. He was later known as The Father of Anamalais.

A statue of Carwer Marsh has been erected on the Kavarkal Estate and this is enroute from Pollachi to Valparai.

Mani took us first to Kollangel River and the Valley there. The entire area was surrounded by tea plantations and was very beautiful. 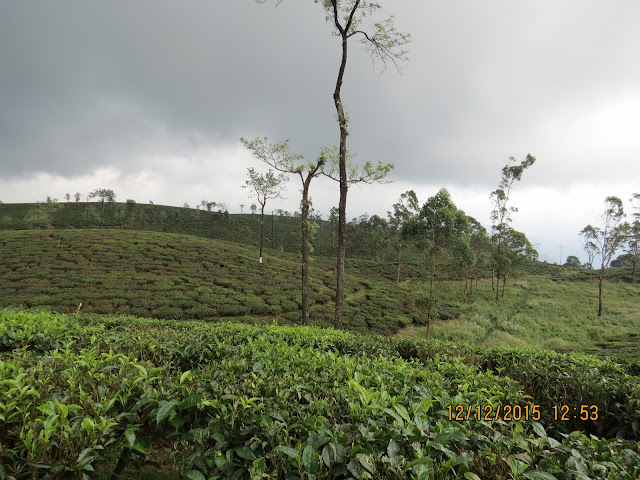 The entire stretch and surroundings was green tea estates. It was very beautiful.

Sidhivinayagar Temple was next. The temple is owned by Jayshree tea industries and is situated in a very beautiful garden environment.

On the way the weather became cloudy and little drizzling happened. Environment was great, we took some nice tea break on a village junction.

It was amidst of Jayashree tea estate. We bought 1 kg tea there, 250 gm each of 4 different flavors. 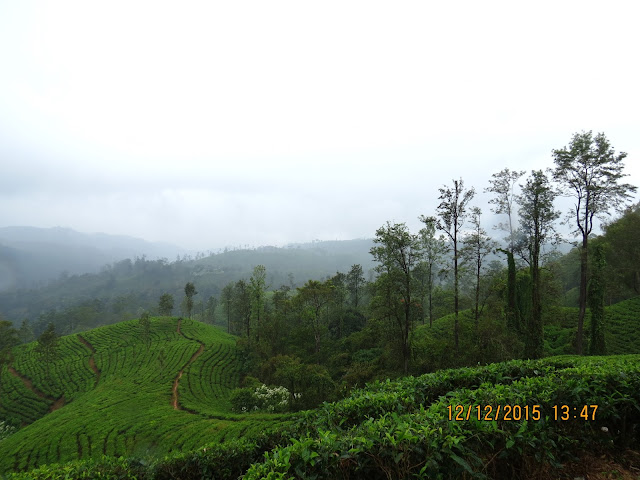 Anaimali peak was visible in the fog. It is the highest peak of Nilgiri range.

Then we visited Velamalai Tunnel and Nirar Dam. 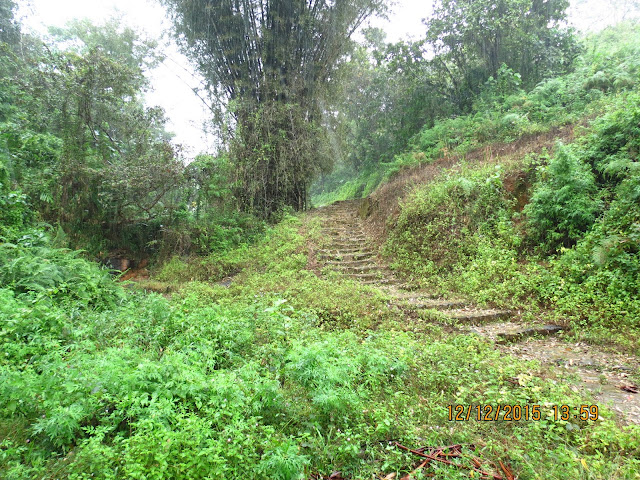 Nature was unfolding its beauty in front of us.There was also a good view of Grass Hills, where we need to do some trekking and need permission from forest department. We postponed it for next trip! 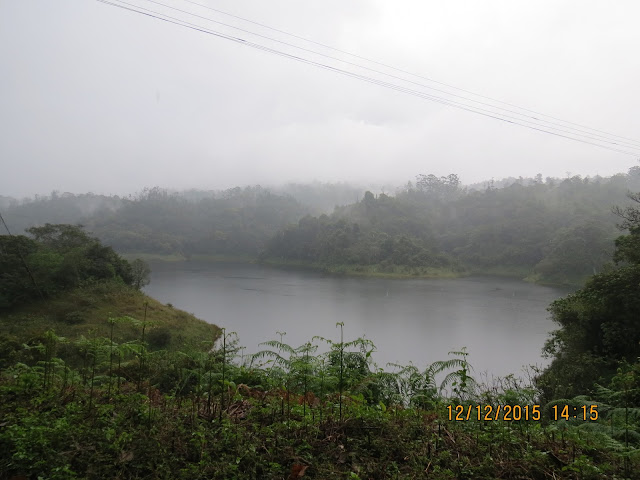 From Jayashree tea estate we drove towards the Nallamudi Poonjolai. Both sides of the route were tea estates and as we approached near, the forest guards had blocked the road as a herd of elephants were seen in the area, we waited for sometime for them to move away and walked in the green and cloudy surroundings. But elephants did not moved and we took the road towards the Nirar dam. 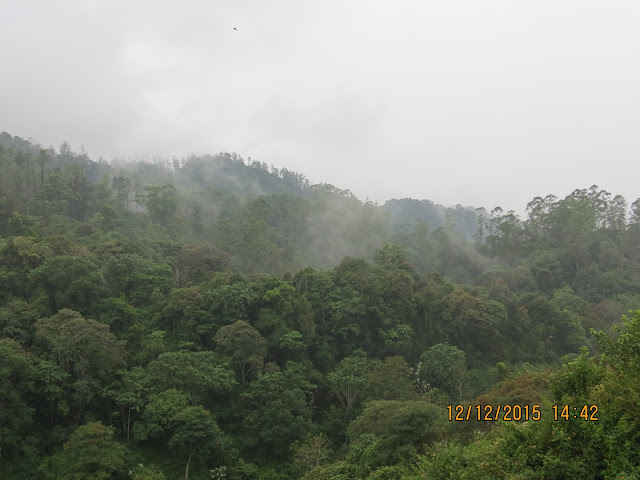 Nirar Dam, situated around 15 km away from Valparai, is mainly used for hydroelectricity production and irrigation purpose. There is a lower and an upper Nirar dam. The lower Nirar dam has a staircase that takes us close to the water. They allow the taxi to take the path to the left at entrance and it ends in a tunnel through which the water is let out.

We visited both upper and lower areas. The surroundings was very peacful and amazing. The peace, fresh air and greenery made the place very charming. 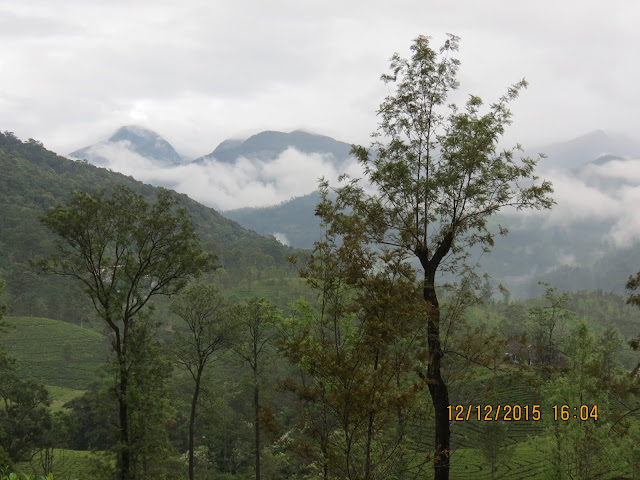 After Nirar Dam, it was time to take lunch, Mani had arranged the vegetarian home made lunch at a small tea shop.

It was very good, tasty and hiegenic.

Next we visited the Vellamalai Tunnel. This is a River coming out of Nirar hydroelectric dam. This clear river flows in full strength during the Monsoon period. Water was not much but some youngesters were enjoing in waters. 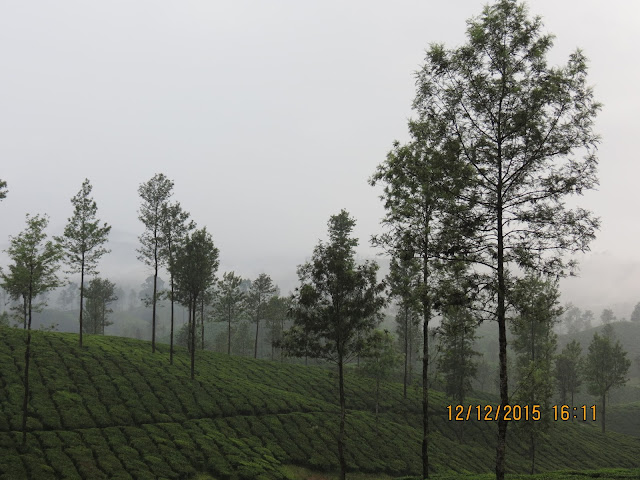 Though the weather was cold and cloudy but young age is is rebellious!

There was a little waterfall also there and water was quite cold.

There are numerous small and big waterfalls all around the Valparai. Mani took us to many of them through different tea estates.

Evening was approaching fast and passing through different tea estates, we came back to our hotel. A little dinner and a good sleep refreshed us for the next day. 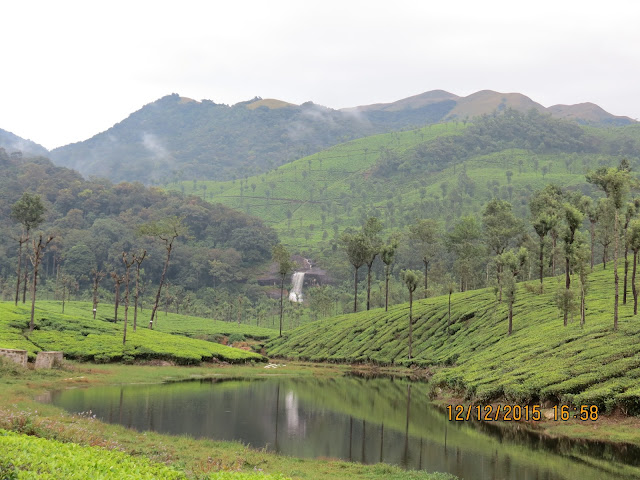 I had plans to visit Athirappaly Falls also but time was limited. I also felt its better to visit this famous falls from Cochin some other time.

Next day we checked out of hotel and with Mani we took the road to Pollachi.

Above the road there are ropes tied by environmentalists. This is done so that monkeys can cross road through these and so less chances of accidents. 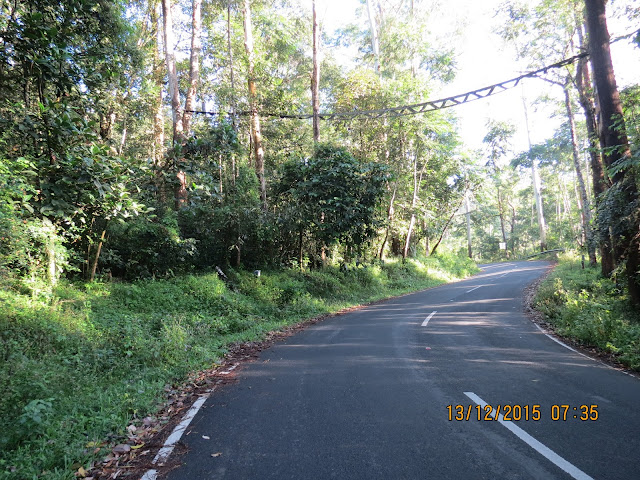 Through dense bushes and forests, we tried to spot some animal but remained unlucky except one big eagle. Then Mani took us through bIson Valley, which is again acrs of tea estates and finally we spotted a bison and a deer there. I could not capture the deer in my camera, it just disappeared in seconds. Though the Bison was more liberal in this sense and gave me some nice close clicks!

We also visited the statue of Carwer Marsh. 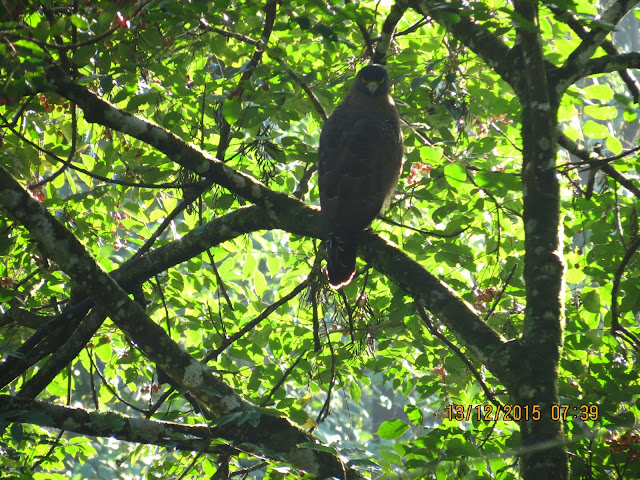 There are many waterfalls on the way. We stopped at a few of them to capture the moments.

We took our morning tea (second one, first we had taken at Valparai itself ) at a nice waterfall, in the "Waterfall Tea Estates". Here also I purchased 1 kg of tea.

Next is Attakatti, which is a small village and there a training center for forest officials is situated. We stopped there for breakfast. It was very nice with tasty Idli, Vada, Pongal and Dosa. The beet root chatni was very tasty.

On the next side of road after a walk of about 100 meters, there is a beautiful view point and the upper and lower Aliyar Dam can be seen from here. Though the place is a bit scary as there is straight drop and forest officials have not put any sign board or fence there.

Next was the Looms View point, which is at 9th bend. Fresh Honey was being sold there and the place was infested with monkeys ready to snatch anything from your hands. The curvey roads below and the distant views of Monkey Falls as well as Alyar Dam was very amazing. 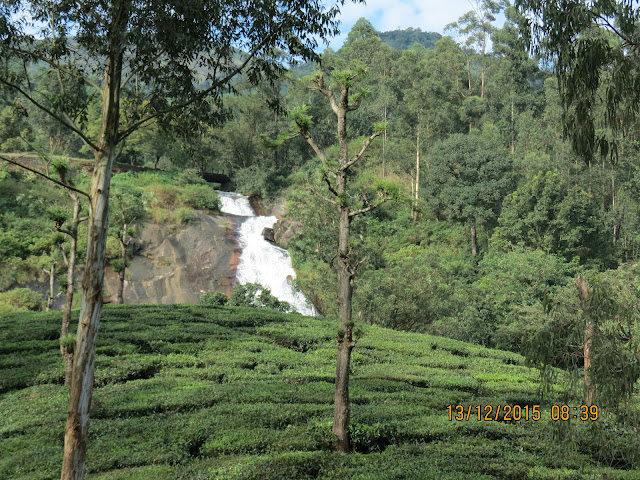 At next few bends, we tried to spot the Nilgiri Tahr but were could find one. I had seen many of these in my visit to Munnar. 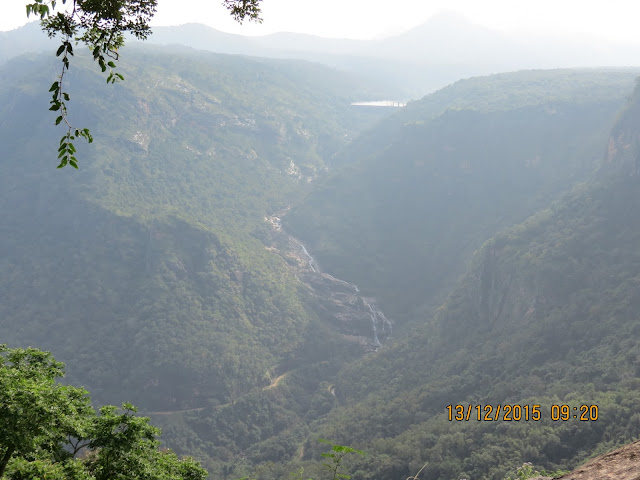 The Valparai range is habitat to the Nilgiri tahr, an endemic wild goat. These mountain goats inhabit the high ranges and prefer open terrain, cliffs and grass-covered hills, a habitat largely confined to the southern Western Ghats. Today, because of hunting and large-scale habitat destruction, they exist only in a few isolated sites like the Anaimalai Hills.

Now we were at Monkey falls. One thing to note here is that ticket for the Monkey Falls need to be taken at the entry gate which is enroute from Pollachi towards Valparai. Incase you are coming from Valparai, then go further, take tickets and come back, an extra couple of KMs of round trip.

Monkey Falls is about 30 km from Pollachi and about 6 km from Azhiyar Dam.


Monkey Falls is a famous and popular tourism spot. Monkey falls is an ideal place for little children and adults to take a bath. Though at some places its a bit slippery and one needs to be careful.

We spend some time there just sitting and watching the water falling freely.

Nature is pure and always showers its beauty with all. Instead of learning something from it, we are destroying it.

Whats the way out?


Mid day was approaching. Temperature was changing fast as we were now at the ouskirts of Pollachi. We had to catch the afternoon train from Coimbatore so we now drove quickly towards our last stopover, the Aliyar (Azhiyar) Dam.

I had visited this place also in my last trip to Top Slip in summer.

The reservoir surrounded by high mountains has the breathtaking view. The garden is special attraction for kids. 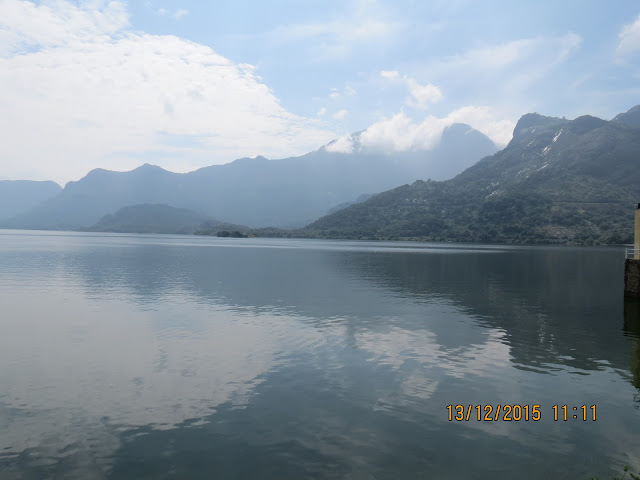 The place is to be better visited in early morning or late afternoon and evenings. We spend some time there and then took the road to Pollachi bus stand.

Mani dropped us at Pollachi Bus stand. we got a bus to Coimbatore soon and then from Ukkadam bus stand at Coimbatore, we took an auto to the Coimbatore Junction Railway station.

Taking lunch at a nearby hotel we took our train. It was a bit late but we reached Bangalore on time.

Valparai is highly recommended for a short but beautiful weekend getaway. But not sure its not as famous as Ooty or Kodaikanal. We were the only family at most of the places. Perhaps its not being on tourist map at par with other places has make sure that this place still retains its charm.
Posted by trips of alok at 3:09 PM