On the weekend of 14th and 15th march, 2009. The Almighty Lord gave me an oppertunity to visit his divine abode of Tirupati/Tirumala as well as Shri Kalahasti.

Tirupati and Tirumala, I am blessed to have visited many times, but this was my first trip to Shri Kalahasti.

Chandan came up with this idea and immediately I jumped on this.

Saturday, 14th March, early morning, Chandan and his family came to my place at around 5:30 AM. In next 10 minutes we were on our way with I managing the wheels of Santro.

Tickets for Tirumala Venkateshwara Temple, we had booked on last weekend itself from Tirupati Tirumala DevSthanam Trust Office at 16th Cross, Malleshwaram, Bangalore. We had got the darshan slot on Sunday, 15th March at 03:00 PM.

The route from my home at Bangalore to Tirumala/Tirupati and Kalahasti is Old Madras Road - Hoskote- Kolar - Mulbagal - Palmaner - Chittor - Tirupati - Shri Kalahasti.

From Bangalore, Tirupati is about 250 KMs. From Tirupati, Tirumala is about 22 Kms and Shri Kalahasti about 35 KMs.

This was my first drive outside Bangalore on a Santro. So far I had taken only my Alto.

We drove smoothly till Kolar, and then we encountered a very dense fog. It was like, in Delhi in December/January. I was a little surprised. The fog was so dense that it was not possible to see beyond 10 meters or so.

I drove very carefully, with headlights and blinkers on. Speed got readuced greatly to about 40-45 KMPH.

This continued for about 45 minutes and finally the illuminating rays of Almighty Lord Anshumaan cleared the path for us. We were again on our usual drive comfort.

We stopped at Palmaner to take breakfast and proceeded further.

We reached Tirupati at around 10:45 AM and immediately headed towards Shri Kalahasti.

This ancient temple dedicated to Shiva is one of the Pancha Bhoota Stalams (temples celebrating Shiva as the embodiment of the primary elements), air being the element in case here, the other temples being Tiruvannamalai (Fire), Chidambaram (Space),Tiruvanaikkaval (Water) and Kanchipuram (Earth) respectively.

This temple is also associated with Rahu and Ketu. People with Kala Sarpa Dosha comes here for getting rid of that.

The Tamil Cholas and the Vijayanagara Rulers have made several endowments to this temple. Adi Sankara is said to have visited this temple and offered worship here.

There are Chola inscriptions in this temple which date back to the 10th century CE.

The Telugu poem 'Sri Kalahasti Satakam' explains the traditions associated with this temple. Muthuswamy Deekshitar, one of the foremost composers in the Karnatic Music Tradition has sung the glory of this temple in his 'Sree Kaalahasteesa'.

The vast west facing Kalahastiswara temple is built adjoining a hill, and on the banks of the river Swarnamukhi. At some points, the hill serves as the wall of the temple. The temple prakarams follow the contour of the adjoining hill and hence the temple plan is rather irregular. North of the temple is the Durgambika hill, south is the Kannappar hill and east is the Kumaraswamy hill.

The legend here is similar to that of the Jambukeswara temple at Tiruvanaikka, near Tiiruchirapalli. Shiva is said to have given salvation to a spider, elephant and a serpent who were ardent devotees of the Shiva Lingam located here. The spider is said to have attained salvation in Kritayuga (the first of the four yugas in the Hindu tradition), while the elephant and the snake were devotees in Treta Yugam, the succeeding aeon. The elephant's devotional outpouring was a source of disturbance to the serpent's display of devotion and vice versa, resulting in animosity between the two, until Shiva's intervention gave both the devotees their liberation.

The main linga is in the shape of an elephant trunk, with tusks on each side and a figure of a spider at the bottom. If you look at the linga from the top it looks like a snake with five hoods. The spider is call "Sri," the snake "Kala," and the elephant "Hasti." The three names combine together in the name Srikalahasti.

It is said that the spider wove a web above the linga to protect it from the sun and rain. The elephant would get water with its trunk and bath the linga (perform abhisheka) and the snake would also worship the Lord. One day the snake found some bilva leaves and water near the Lord. He thought that someone was trying to harm the Lord, so he surrounded the Lord to protect him. When the elephant came the next day to worship the Lord the snake through he was trying to harm the Lord so he got into his trunk. Unable to handle the pain, the elephant dashed his trunk against the linga killing both the snake and the spider. The elephant also died at this time. Lord Siva being satisfied by their devotion, gave liberation to his three devotees.

Kannappa Nayanaar, a hunter is said to have been a great devotee of Kalahasteeswarar. Legend has it that he offered his own eyes to the Shivalingam, and for this reason earned the name Kannappan (his original name being Thinnan), and the distinction of having his statue adorn the sanctum. Nakkiradevar, Indra, Rama, Muchukunda and others are believed to have worshipped Shiva at this temple.

Lord Shiva blessed us with his darshan. Then we visited Mother Paravati Shrine.

After taking lunch there, we started back from Shri Kalahasti and drove back to Tirupati. At Tirupati we enquired about accomodation at Tirumala Hills, but could not get any satisfactory answer, so decided to to go to Tirumala.

But before that we visited the Shrine of Mother Goddess Padmavati.

Tiruchanoor, also known as Alamelumangapuram, is about 5 km from Tirupati. The temple of Sri Padmavathi Devi, the consort of Lord Sri Venkateswara is situated here. It is said that a visit to Tirumala is fruitful only after visiting the Sri Padmavathi Devi temple.

Legend has it that the Lord (Sri Maha Vishnu, who later took on the incarnation of Sri Venkateswara) showed his reverence towards the sage, Bhrigu Maharshi, even though the sage had insulted Vishnu by kicking Him on the chest. In anger, Sri Maha Lakshmi (the Lord's consort) reached Patala Loka, where she heard a divine voice stating that a pushkarini was dug on the banks of the river Swarnamukhi, and here She immersed herself in penance for 12 years.
In the 13th year (during the month of Karteeka, on Panchami day in the last fortnight, highlighted by the nakshathram Uttarashadha), Sri Padmavathi emerged from a golden lotus. It is believed that Goddess MahaLakshmi herself emerged as Sri Padmavathi.

After getting blessed with Mother's Darshan, we started towards the Tirumala Hills.

Pilgrims are advised not to carry any electronic items/belt etc at temple. There are lockers available outside temples to keep them safe.

Before ascending the Tirumala Hills, all vehicles need to take the clearance Certificate. This is done at some distance near Alipiri. Alipri is the place from where the ascend starts to the sacred Tirumala hills.

The picturesque Tirumala hills is situated 2820 ft above MSL and is about 100sq.m in area . It comprises seven peaks ,representing the seven hoods of Audisesha, thus earning the name Seshachalam.

The Tirumala hills are the world's second oldest rock mountains. The Sangam literature of Tamil such as Silapadikaram and Satanar's Manimekalai, dated between 500 BC to 300 AD, mentions Tiruvengadam (now named Tirupati) as the northernmost frontier of the Tamil Kingdoms.

It is believed that it was "Aadi Varaha Kshetra" (the ancient site of Varaha) mentioned in Indian literature dating during the Mauryan and Gupta regimes. Lord Venkateswara is referred in Vedas, Tirupati is considered as Kaliyuga Vaikuntha (Heaven on the earth).

The seven peaks are called Seshadri, Vedadri, Garudadri, Anjandri, Vrishabhadri, Narayandri and Venkatadri (Adri in sanskrit means Hill). The Venkatam hill is believed to be a part of the celestial mount meru, brought to the earth from Vaikuntam by Garuda.The sacred temple of Sri Venkateswara is located on the seventh peak,Venkatdri and there are several legends associated with the manifestation of the lord in Tirumala. The shrine of the lord is very ancient and there are ample references to it in the early inscriptions belonging to the Chola and Pallava periods as well in the Sangam literature.

The Sanctum sanctorum called the Garbha Griha is where the main idol of lord Venkateswara resides. The idol stands majestically to a height of eight feet, in the centre of the sanctum directly beneath a gold guilded dome called the Ananda Nilaya Divay Vimana.The exquisitely wrought idol called the Mulabera is believed to be Svayambhu(self manifested) ,according to the legends. Further ,no human being is known to have either sculpted or installed the idol in the shrine.

He has on the right side of his chest a clear impression of Goddess Lakshmi's, his consort. The deity has a unique magnetism, many devotees who go through the fleeting Sarvadarsanam have unusual psychic experience. They leave with a sense of spiritual satisfaction, coupled with a religious hunger to stand in front of Lord Venkateswara and experience the bliss again and again. 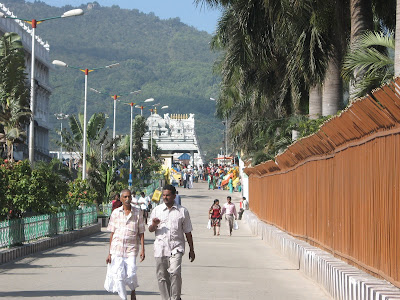 The site was an established center by the 5th century A.D, and the Alvars (Vaishnava saints) belonging to the Bhakti movement in Dravidian land sung in praise of Venketeswara. Its significance in Southern Vaishnava tradition is next only to Srirangam, and the temple rites were formalized by the vaishanvite saint Ramanujacharya himself, in the 11th century AD. The temple was richly endowed by the kings of various dynasties thus adding to its current reputation as the richest and most opulent pilgrimage centre in the world. It was supported by Cholas, later by Hoysalas, the Vijayanagaras. Krishna Deva Raya of Vijayanagara led the temple to great popularity by donating gold and other ornaments for the temple and constructing extended shrines. The place of Chandragiri, presently a village near Tirupati, was used as the secondary capital of Vijayanagara kings.

We did the security clearance and headed towards the abode of merciful Lord.

Usually there are seperate roads for going and coming, but as some repair work was in progrss so only one road was there to ascend and descend.

This posed another challenge for driving, but I was comfortable.

We reached Tirumala about 40 minutes later. It was about 6:00 Pm by now and we started looking for some accomodation. But could not get any. Then we tried at some Mutths also. We are able to get one room but not two as required by us.

So we decided to return back to Tirupati.

A comfortable full night sleep was must to overcome all the physical exertions.

Though we were physically tired but mentally a feeling of bliss was there being near to abode of the merciful Lord.

Sunday morning after taking breakfast we started again for Tirumala Hills. Our darshna time was 3:00 PM, we went in queue at around 1:00 PM.

The merciful, almighty Lord blessed us with his darshan.

We came out at around 4:15 PM, collected the mouth watering Laddu prasadam and at around 4:25 PM, started back from Trirumala to Bangalore.

We drove non stop except for about 45 minutes, when we stopped to take dinner at Palmaner.

We encountered heavy rain at Kolar, but we continued and reached home at about 11:05 PM.

Night driving and particularly on single road poses a great challenge. One has to be extremely careful.