I got the opportunity to visit the abode of Mother Goddess at Devi Patan on 2nd of July. Though the merciful Mother has blessed me many times with her blissful darshan but this time I thought to write it down.

I was visiting my native village for the Chunamani Sanskar (Mundan) of my daughter on 1st of July. In my family it is a tradition to have the "Mundan" at the Temple of Mother Goddess near my Village. The Almighty Mother is our "Kula Devi".

While returning from the ceremony there, we decided to get blessed by the darshan of the Mother at the Shakti Peetha of Devi Patan.

Devi Patan temple is one of the most important Shaktipeeths. Surrounded amidst the beauty of Himalayan tarai, this famous shrine is among one of the 51 Shakti Peeths. It is believed that during the event when Lord Shiva was carrying the corpse of his wife Sati, the left shoulder of Sati along with the cloth on her shoulder had fallen here. 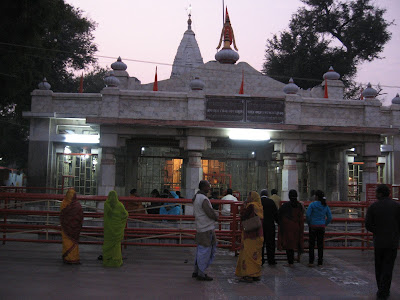 The Mother is worshipped here as Shri Paateshwari.

The Devi Patan Siddha Peeth had been established by Guru Gorakshnath. The Royal family of Balrampur, is today the caretaker of the temple. A large fair takes place in Navratri and every year on Chaitra Panchami the deity of Peer Ratan Nath is brought from Dang in Nepal to the Devi Patan temple where it is worshipped along with the Devi.

The distance from Lucknow to the Devi Patan Shrine is about 190 KMs. The route is Lucknow – Gonda – Balrampur – Devi Patan.

We reached there at around 12:30 in afternoon. Lord Bhaskar was at his full on this hot summer noon. But the feeling that, now we are in shadow of the mercy of the almighty mother, takes away all the pains.

It is said that during "Sat Yuga" the left shoulder along with "Paatamber" cloth. During Treta Yuga, because of public opinion, when Lord Raam decided to left mother Sita then from here she went to the "Paataal Loka". Inside the Sanctum Sanitorium, there is a platform, inside which there is said to be a underground passage to "Paataal". Earlier people used to worship here only but later the idol of mother was also installed just behind this platform.

The mother here is also worshipped as "Shri Paataaleshwari".

During Mahabharat period, Karna got educated here in weaponery from Sage Parashuraam. He used to take bath at Surya Kund, just next to main temple.

It is said that "Meer Samar", army general of "Saiyad Salarjung Masood", attacked the temple, but from the underground passage an army of honey bees appeared suddenly and his forces fled away. Meer Samar was killed and his tomb is inside tmple complex itself.

Just outside the temple comples there is a Shiva Temple. It is said to be built upon the "Samaadhi" of Yogi Chandrashekhar Nath.

Just behind the main temple, is the place of Sant Ratan Nath.

Yogi Ratan Nath is said to be a great yogi and one of the Siddha of "Naath Sampradaya". Earlier he was king of "Daang" area of Nepal. Later he took the path to be an ascetic.

He used to come to worship mother daily from Nepal by crossing the mountain.

His place "Dareecha" are at Daang (Nepal) as well as in this temple.

His "Patra", said be be a giver of all the desired things is kept at his temple in Daang (Nepal). This "Patra" is carried every Chaitra Panchami to this place and remains here till Chaitra Navami.

He is said to be a great devotee of mother and mother is said to have given her a boon that he will also be worshipped along with the mother here.

Adjacent to the temple is huge "Aakaash Bhairav". There is "Akhand Jyoti" here. This is "Bhairav Dhooni". After having darshan of Mother we visited to have Darshan of Bhairav Baba.

The Idol of Bhairav is huge. I am not sure but guess that daily Yagna and may be Tantra Sadhna is done there.

It is recommended to have darshan of Bhairav after visiting shrine of the Mercriful Mother.

Temple is small one, not as big as we see in the South India. The Idol of Mother is very attractive. The smile on her face assures all that I am here to protect you.

This is very sacred place and the "tapa bhoomi" of Shri Yogi Gorakhnath and many other Yogi and ascetics.

One thing which I felt is pilgrims here should avoid themselves from so called "Guide" and "Panda". They try to extract money. I suggest that pilgrims should just concentrate on their worship and Meditation. There is no one in between Mother and devotee. Mother likes only pure heart and devotion!!

Pleased by the Darshan, we started back towards Lucknow. It takes around 5 hours to cover this distance. The road from Gonda till Barabanki is quite bumpy and one needs a lot of caution. We had an advantage of Toyota Innova so things were smooth.

Mother is so merciful!
Posted by trips of alok at 12:48 PM