As a subject, History always fascinated me and so does the historical places.

Vijayanagar Empire has a special place in my heart. They are those, who protected the culture in South India.

So a trip to Lepakshi is must for those who are interested in heritage sites, for those who marvel at the art of our ancestors. The place is also renowned as the repository of the best mural paintings of the Vijayanagar Kings.

I came to know about Lepakshi incidently when at Hindupur Railway Station, I saw the board "Alight here for Lepakshi Temple" many years ago.

Then while reading some book on "Temples in Andhra Pradesh", I got a reference to Lepakshi. And then I came to know that Lepakshi has some connection with Vijayanagar Empire..and instantly I decided to go there.

But it took some time to actual visit, but meanwhile, I kept on collecting information about this place.

Lepakshi is a small village, which lies 15-km east of Hindupur in Andhra Pradesh. From Hyderabad, it is 480 KMs and from Bangalore about 125 KMs.

We planned to visit Lepakshi on Sunday, 13th September, provided weather is good. Early morning there was havey rain so I thought of dropping the idea, but at around 8 AM, Lord Bhaskar emerged from the clouds, making way for our plans.

We started at about 9:30 AM from home. The route from Bangalore is through NH7 (Hyderabad Highway), through Devanhalli - Chickaballapur - Bagepalli - Lepakshi.

NH7 is very nice road. My Alto was running smoothly as per my instructions. There was many a time temptation to cross 100 KMph, but I followed self imposed restriction of not crossing 80 KMph. Though many a times, particularly at down slopes, I crossed it but quickly came back to my range.

Lord Aditya was playing with clouds. But as the day progressed, it became more and more hot.

As we crossed Bagepalli, on right hand side, there was a board declaring "Eenadu Pradesh Welcomes you", indicating that now we were in AP. My Mobile also confirmed this.

A few KMs further, we saw AP RTO office. From here we need to take a left turn towards Lepakshi. A lot of vehicles were parked there and so a lot of rush, it is like a small market place. Anyway I asked one person and he confirmed the route.

So we left the NH7 and took the state road to Lepakshi. It is about 16 KMs from that turn. The state road is horrible, except a few good "patches", it is very pathetic.

Again after about 1 KM, there was a idol of two swans on left side. Here there was bifurcation in the road. Again I got confused, where to go? Both roads were equally pathetic and there was no sign board in English. To my luck, there was a temperory bus stop. One pretty girl told me the route. We had to take the straight road. I thanked her and proceeded further.

The big Nandi at the entrance of village welcomed us. With length of 9 meters, this monolithic idol is said to be the largest Nandi in India. 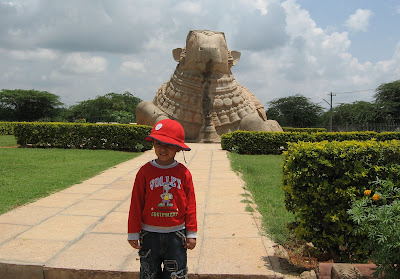 After spending some time there, we proceeded towards the Veerbhadra Temple.

The shrine of Veerbhadra is on a hillock known as "Kurma Shaila" (tortoise shaped hill). The shrine also includes shrines of Shiva, Vishnu and Mother Goddess.

As per the inscriptions, the temple was constructed around 1538 AD.

Veerabhadra temple is a notable example of the Vijayanagar style of architecture. A reference is made in the 'Skandapurana' to Lepakshi as one of the hundred and eight important 'Shaiva Kshetras' (shrines). Though the temple of Veerabhadra is claimed to have been constructed by Saint 'Agastya' himself, it was developed into the present exquisite shrine by 'Virupanna', the treasurer of the Vijayanagar Kings. He conceived the idea as he found the image of Veerabhadra.

It is also said that in this place, Jatayu fought against Deamon King Ravana, when he was taking away Sita to Lanka. Jatayu was injured in the fight and lost his wings. Lord Rama and Lakshmana, found Jatayu, and got to know about Ravana’s abduction of Sita. Jatayu died, and his last rites were done by Rama and Lakshmana. It is due to this reason, that this place is called Le – Pakshi, derived from Sanskrit word "Getup Bird".

There is another story related to the name Lepakshi. It is said that Virupanna executed the consruction plan of the temple in the absence of the king and used the treasure when he was away at Vijayanagar. When the construction was almost finished and it was being supervised the king returned and found the treasure empty. The king ordered, as a punishment to this crime, that he should be blinded. The treasurer being a loyal person carried out the punishment spot with his own hands.

Even today one can see two dark stains upon the wall near the 'Kalyana Mandapa', which are said to be the marks made by his eyes, which he himself dashed against the wall. The builder did not survive for a long time after that and the village is called "Lepa-akshi Lepakshi", i.e., a village of the blinded eye.

The temple is divided into three parts - the 'Mukha Mandapa', (also called 'Nitya Mandapa' or 'Ranga Mandapa'), the 'Artha Mandapa' and 'Garbha Griha', and the 'Kalyana Mandapa', with 38 carved monoli Kalyana Mandapam is a standing monument to the exuberance of Vijayanagar art but it is left unfinished.

The best specimens of the Vijayanagar style of sculpture and mural paintings are found in the Natya and Kalyana Mandapams (dance and wedding halls). These sculptures depict puranic episodes like those of 'Ananthasayana', 'Dattatreya', 'Chaturmukha Bramha', 'Tumburu', 'Narada' and 'Rambha'.

On the right side, one can see the pavilion constructed in "Kakatiya Style". In this the pillers have total five individual parts, sculpted differently and then locked with each other. Otherwise mostly all other sculptures are in "Vijaynagar style". In this the entire pillars are carved out of single stone.

Most celebrated for its splendid paintings, Lepakshi Temple has a colossal painting of Virabhadra in the central hall. In the 'Hall of Dance', one can trace eight panels, depicting Puranic legends on the ceiling. Most of the paintings and murals have been devastated by the ravages of times. Lepakshi is a notable store of expertise, which is on the brink of extinction.

Lepakshi Temple perhaps houses the largest monolithic structure of Nagalinga in India. It is said to be carved by the sculptures, when their mother was busy preparing lunch for them. 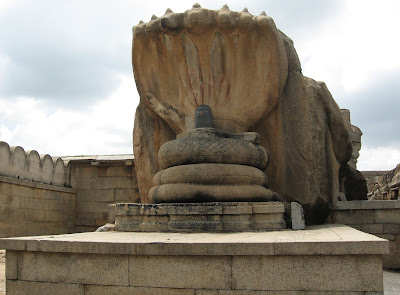 Another exquisite statue of Lord Ganesha captures the attention of everyone, especially when people enter the second interior court.

Also depicted on the stone here is the story of Shree Kalahasti, the story of a spider and an elephant worshipping Lord Shiva.

The temple priest acted as a guide to us and he explained patiently about the details.

We worshipped to Lord Veerbhadra, Lord Shiva, Lord Vishnu and Mother Goddess. We also visited the small cave near sanctum Sanctorium, which is said to be the place where Sage Agastya had done the penance.

Mother Goddess is said to be residing in a pillar in the sanctum Sanctoriam and there only she is worshipped. A few small shrines are also loacetd here. The Longam established by Lord Rama and Lord Hanuman are there.

Outside,on the right side of main shrine, there is a print of left foot, said to be of either Mother Goddess or Mother Sita.

Nearby there is idol of Veeranjaneya.

Plate and bowels are sculpted on the rocky ground and it is said that sculptors used to eat here. It is interesting to see these. They seems like "Bombay Thaali".

The temple and paintings etc. are in bad shape and its another example how we Indians treat with our heritage.

After spending a few hours in temple, we started back. On midway we took late lunch at Chickballapur at "Sri Shanthi Sagar".

Weather was very hot and almost for all the time during our return journey, the AC was on.