Besides history and historical places, my other love is jungles and wildlife. After visiting some of the very beautiful and fascinating jungles in south (e.g. Bandipur, Nagarhole, Dandeli-Anshi, Silent Valley, Pambikulam, Top Slip etc.), It was time to explore some in North.

Dudhwa, Rajaji and Jim Corbbet are most famous Tiger reserves in UP/Uttarakhand. I decided to start with Dudhwa as it was close to Lucknow and so was easy to plan.

The Dudhwa National Park is in the Terai (foothills of Himalayan region) of Uttar Pradesh and covers an area of about 1500 sq KMs.

It is located on the Indo-Nepal border and stretches mainly across the Lakhimpur Kheri and Bahraich districts and comprises the Dudhwa National Park, Kishanpur Wildlife Sanctuary and Katarniaghat Wildlife Sanctuary. It represents one of the few remaining examples of a highly diverse and productive Terai ecosystem, supporting a large number of endangered species. 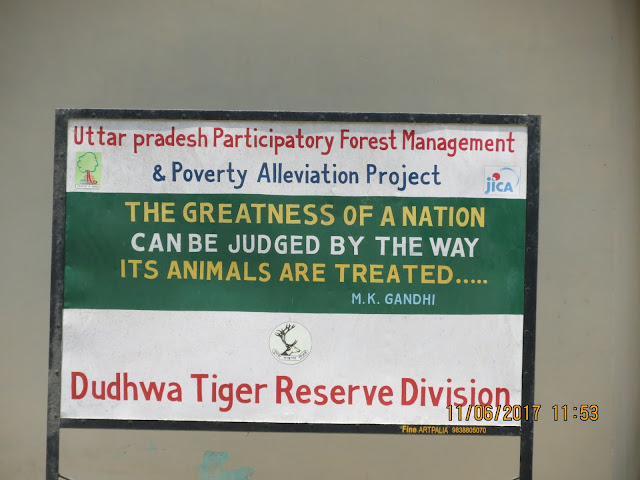 There is excellent lodging facility available through UP Eco Tourism. I booked a room through them. It can be done online. 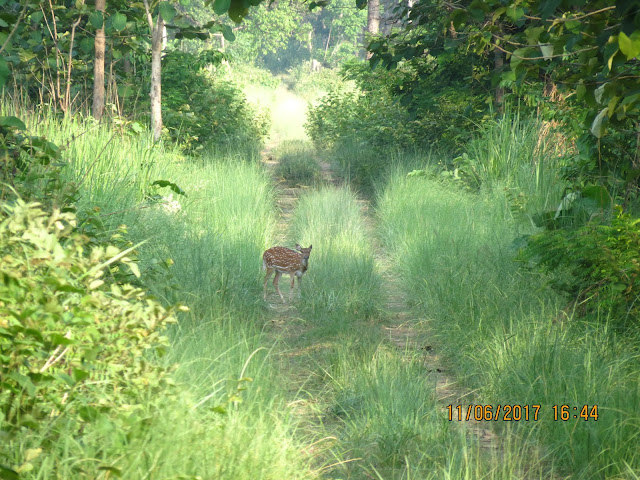 The area was established in 1958 as a wildlife sanctuary for swamp deer. Thanks to the efforts of Billy Arjan Singh, the area was notified as a national park in January 1977 and a tiger reserve in 1987.

The route to Dudhwais via Lucknow – Sitapur – LakhimPur – Palia – Dudhwa.

We started early morning at around 7 AM from Lucknow. Total distance of about 220 KMs took around 4 hours.

Drive was good overall. The road is not that good after Sitapur. Need to take care not to enter Sitapur city. A few KMs before it, take right turn to go to Lakhimpur and then towards Palia.

Like most of northern India, Dudhwa has an extreme humid subtropical weather conditions. Summers are hot and winters very cold.

The park's dense forest along with grasslands is characteristic of the Terai ecosystems and the area is, probably, the last prominent remnant of this type of ecosystem. The grasslands comprise about 19% of the park. The wetlands constitute the third major habitat type and include the rivers, streams, lakes and marshes.

We took late breakfast and after relaxing for some time, started exploring the surroundings.
The UP Eco Tourism Lodge is nice place to hang around. It has quite good watch towers and also a small museum to keep tourists engaged.

Major attractions of Dudhwa National Park are the tigers (estimated to be more than 100) and swamp deer (population over 1,600). Billy Arjan Singh successfully hand-reared and reintroduced zoo-born tigers and leopards into the wilds of Dudhwa. Some rare species inhabit the park. Hispid hare, earlier thought to have become extinct, was rediscovered here in 1984.

In the mid-1980s, Indian rhinoceros was reintroduced into Dudhwa from Assam and Nepal. The grasslands here are similar to habitat required for Rhinos. 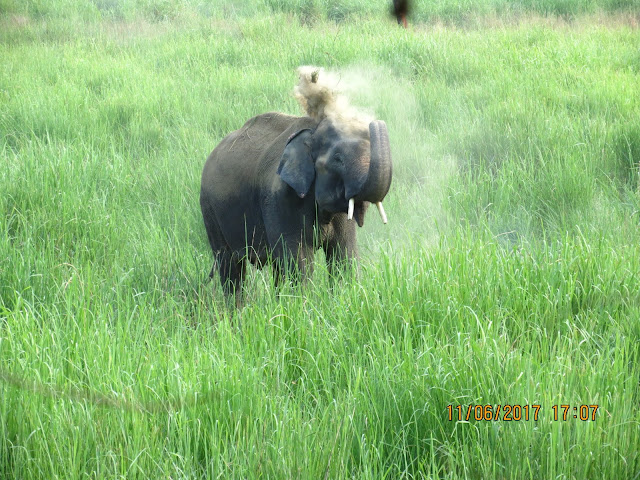 We had booked Jungle safari in advance (online). At around 330 PM, the guard informed us about it. We all got ready immediately and rushed to it!

Safari here was in open Jeep. It was a new experience, more exciting than the mini buses that we had taken for safari so far across different Tiger Reserves. Also it gives feeling of adventure and these Tata Xenon Jeeps were surprisingly very silent and so very well suited for safari. Mini buses tend to scare away animals with their engine sound.

So for next 3 hours, we were going to be in Dudhwa forest, in that open Jeep, with our driver and one guide. 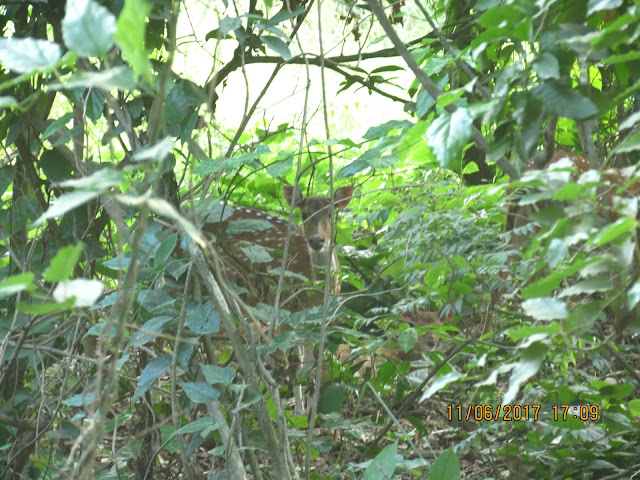 Besides Tigers, Elephants and Rhinos, Dudhwa is also a stronghold of the “Barasingha”. It is said that around half of the world's Barasinghas are present in Dudhwa. This deer is smaller than the Sambar deer and has 12 antlers (that’s why called as 12 = “Baarah” in hindi, singa = horns/antlers).

And so we entered into the forest.

Front row were the driver and guide, middle row the kids and last row my wife and me.

Searching a tiger in its territory in open Jeep is quite an adventurous experience.

This forest has some of the best forests of 'Sal' tree in the world, amongst other flora; and is a virtual unexplored paradise for nature lovers and wildlife enthusiasts.

Soon we reached one junction. One road was barricaded. The guide informed us that a tigress had seen roaming in that road along with two cubs. Tigress with cubs becomes more aggressive and is good to avoid them.

We took another road.

The forest is rich with dense vegetation, in between it is also covered with thick grass lands. These grass are as tall where even an elephant can hide, so known as elephant grass. We stopped at a few places to feel the jungle lore and also to spot presence of some animals in close vicinity. 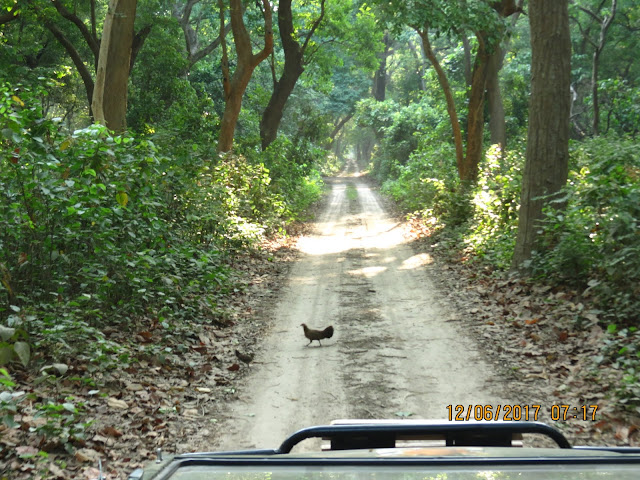 We came across a tusker and also some deer and fowls, bird etc. The ruler of Indian Jungles still eluded me.

We also passed through a swamp area and spotted a swamp and another barking deer there.

Around 630 PM, as It was becoming dark and so we turned towards the lodge. 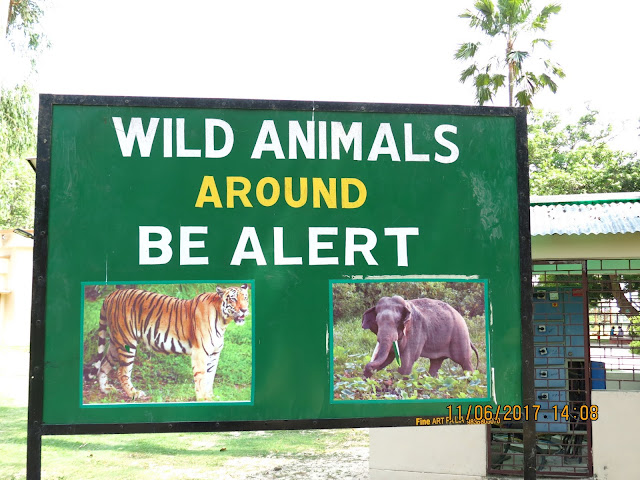 I also came to know about a forest rest house in a place called Sathiana. This is located deep inside forest and permission is required from Forest officer at Lucknow or Lakhimpur. Staying there must be very exciting and I need to explore the option. 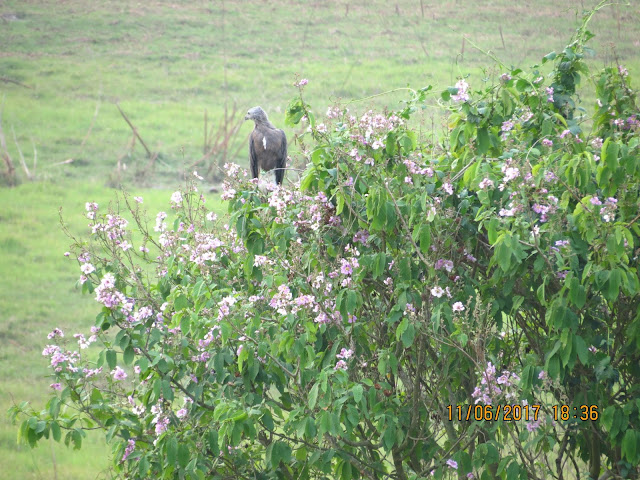 Food is good at lodge but a little costly. Anyways we took our dinner and went to bed to wake up early as the safari was scheduled from 530 AM! 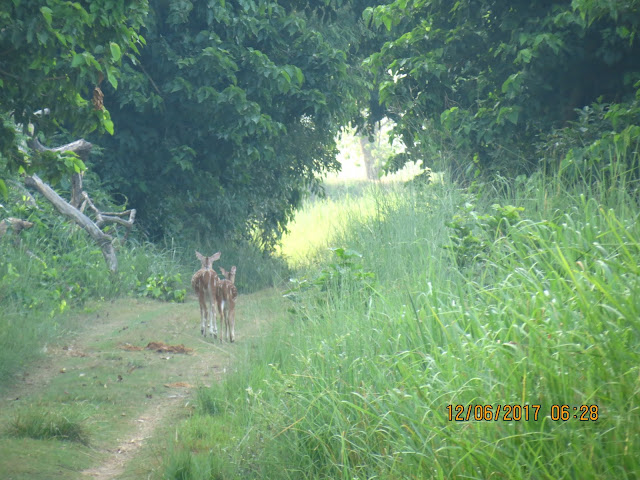 Night was peaceful, though I heard some jungle alarm calls at a distance.

Early morning, we all got ready quickly and in time we boarded our Jeep.

Jeep took us first to the designated spot for elephant safari.

This was our second chance to board an elephant. First, we did so at Nisargadhama near Madikeri.

My son was a bit apprehensive though my daughter is as brave as always! 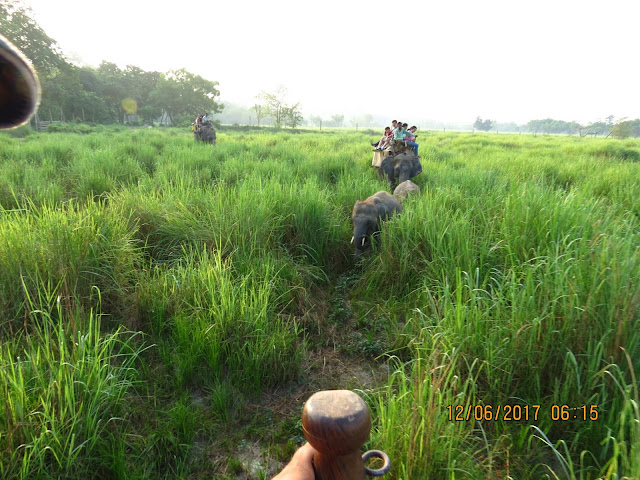 The elephant safari is for an hour. There were total three elephants in the safari caravan. They were also accompanied by two calves. These two baby elephants were another point of attraction for all of us and they accompanied us throughout this safari. The mahaut told us that with out their calves these elephants will refuse to go. 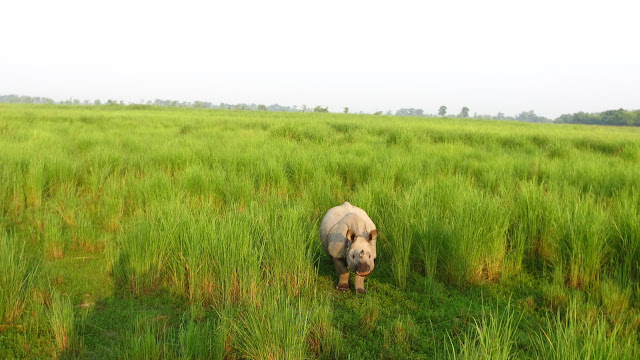 Walking slowly, soon we entered the marshy grasslands and got engulfed into these grass as tall as elephants themselves. 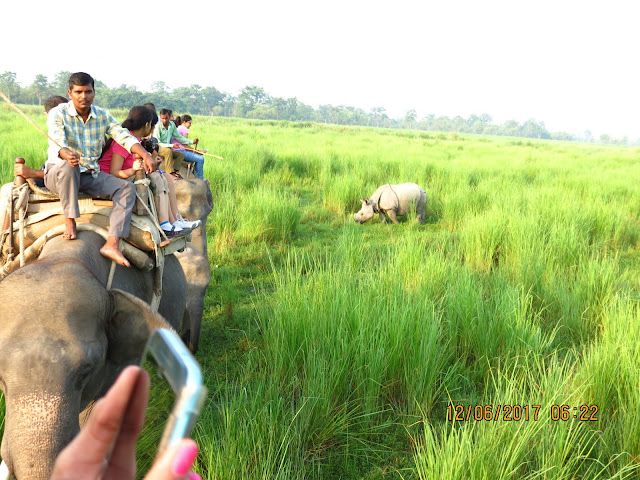 Elephant safari is basically to spot Rhinos. Deer etc. can also be sighted and sighting a Tiger will always be a pleasure.

Our elephant was in the front and after roaming some distance deep inside that grassland, the mahaut silently took our attention towards a barking deer, which disappeared in grass, as I tried to capture it in my camera.

A little further was a Rhino! 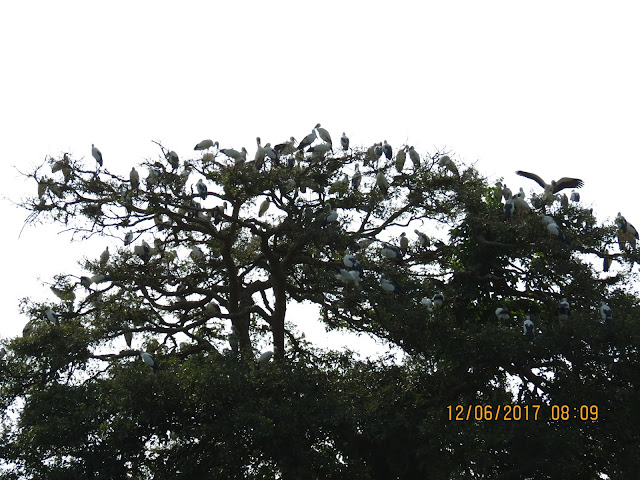 Aware of our presence, it saw all of us approaching and remain in its position. We stopped at a safe distance and took pics and videos. Rhinos are a bit short tempered though like to remain at a safe distance from humans and elephants.

Mahaut told us that Tigers sometimes attacks these giant creatures, though the main target remains its calves. 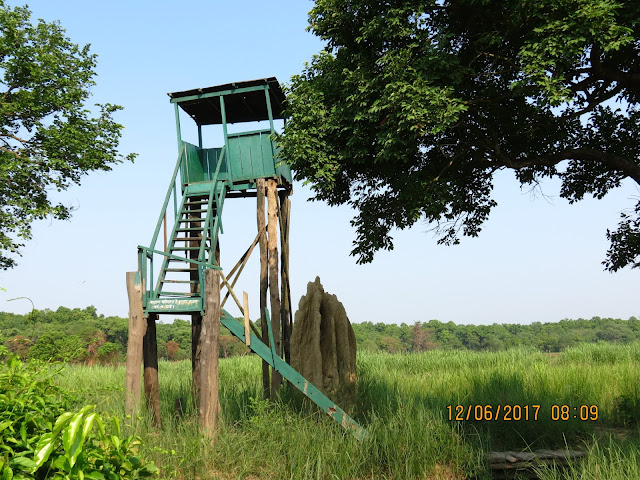 We also prayed God to get a glimpse of Tiger also somewhere but to no avail.

While returning, again we came across a herd of deer, who fled in panic as we approached.

Slowly we returned back to Elephant camp and alighted to board the Jeep again for next two hours in forest.

Though, we could not see a Tiger but our driver and guide showed us the fresh pug marks of it. As per them perhaps the tiger had passed through that route not earlier than a couple of hours!

We again through a swamp area as yesterday evening. Our guide told that sometimes Tigers roam through these open areas. We tried to scan through the watch tower. A flock of migratory birds were on the trees. Except that there was silence.

Dudhwa's birds are a delight for any avid bird watcher.

We were back by around 10 AM and took our late breakfast.
Time was to take road to Lucknow. This was end to our first visit to Dudhwa. Very nice place to spend quality time with family and roam in dense wilderness.

Another drive of 4 hours and we were in comfort of our homes.

Time to Visit
The park remains open to public from 15th November to 15th June. Better to do advnce booking through website of UP Eco Tourism.

Do's & Dont's
•  Go to the sanctuary only when one has a confirmed booking of an accommodation.
•  Take the pleasure of viewing wildlife, but do not invite the danger by being adventurous.
•  Do not listen to music inside the sanctuary instead hear the music of nature.
•  Do not smoke inside the forest Accidental fires can destroy a beautiful jungle to ashes.
•  The national park is not a zoo, sighting wild animal is luck. Be cautious and vigilant.
•  Avoid going with infants and very small children.
Posted by trips of alok at 8:50 PM