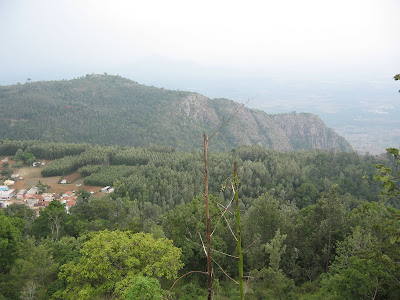 Yercaud is a hill station near Salem, Tamil Nadu in the Servarayan range of hills (anglicized as Shevaroys) in the Eastern Ghats. It is at an altitude of 1515 metres (4969 feet) above the mean sea level. The highest point in Yercaud is the Servarayan temple. Hence the Yercaud hill area is also known as Shevaroy Hills.

Since long it was in my mind to visit Yercaud. On the weekend of 29th and 30th May, 2010 finally the plan was laid down.

Mayank accompanied me for this trip.

From Bangalore it is about 240 KMs.

The road is excellent or rather I will say one of the best roads in India. But it comes at a price of toll. There are many toll gates. As far as I remember, from Bangalore till Salem there are about 6 charging from Rs. 20 to Rs. 48.

The scenic beauty along the road is also excellent and we drove comfortably reaching Salem at around 10:30 AM. In between we stopped at one small place to take breakfast, which Mayank has got packed at home itself.

Then through Salem city we took the ghat road to Yercaud. We had to ask many times for the correct route as there was no indicator for the place. This I found a little nirritating. There must be proper sign-boards.

Being weekend, there was quite a rush on the ghat road.

We took about 1 hr to cover that 22 KMs of hill drive. There are 20 hair pin bends on this route. For me it was one of the most challenging drive so far. Drive to Tirupati, Chamundi hills, Nandi hills or even Ooty were easier compared to this.

The town gets its name from the lake located at its center - in Tamil "Yeri" means "lake" and "Kaadu" means "forest".

Though the first house was built in 1840, but the first metalled roads were laid only in the early 20th century.

There was quite a lot of rush at the small town, and with first impression, I did not liked the place. My idea was to be in peace.

We started looking for hotel, but found all of them to be fully packed. Finally at one hotel "Select" agreed to give us an ordinary room after 2:00 PM.

So we decided to visit a few place starting with temples.

we took the road to Servaroyan Temple. As soon as We crossed half a KM, we came into another world...lush green forests, silence and excellent weather...thats what was my idea for a perfect holiday!!

Some of the original forests continue to exist in the Yercaud hills and contain several endemic species of plants and fauna.

First of all we visited Raj Rajeshwari Temple.

Getting blessed from merciful mother, we proceeded towards Servaroyan Temple.

THE SERVAROYAN TEMPLE
This is the third highest range in this part with a modern cave temple at its top. There was a big queue so we decided to roam around there for some time. The cool breeze and the surrounding breeze was just fantastic.

The hill top is bald with a real open view of all the hills around. It presents another angle of the distant town. The adjacent hill is gradually chopped (mined) off daily as it is a very rich source of Bauxite. Alas!! this is the price of modern day luxury!!!

As the queue got less a bit, we also joined the queue. From outside, the temple looks like a small one room, with no temple like structure, but as we entered that room, we realised, the temple was actually a cave. We had to go by minding our head.

A little inside, there are idols of Lord Murugan and Mother Kaveri.

The cave is still deeper behind the Lord's idols. The priest was telling that it is about 1/2 to 1 KM further.

Getting blessed with darshan, we proceeded back to Yercaud town. Meanwhile Mayank called the hotel again and secured one room.

Directly we headed towards the room and took some rest after taking lunch at nearby "Venkateshwara". It was typical south Indian food, but quite hygenic and good.

In the evening, we started for Pagoda Point.

The roads are narrow and was flooded with cars, it took for us a while to get out of Yercaud town and to go close to nature. Driving was fun in the midst of nature and cool environment on a good but narrow road.

PAGODA POINT
This is famous view point. It is said to be once upon a time adorned, with stone built pagodas, is now home to a temple.

The stone-age implements were found from the ancient shrine located here, which is about 5 km from the Yercaud lake.

The view from here is fascinating.

LADY'S SEAT
Our next detination was Lady's seat. It is one of the best views that Yercaud promises. From Pagoda point, we returmed back towards Yercaud town and then proceeded towards Lady' seat. You get a panoramic view of the ghats and all the distant vehicles dwindling their way in and out of trees along the winding ghat road. It surely is a breath-taking view. One can have a closer view of the plains below with the help of the telescope mounted here. 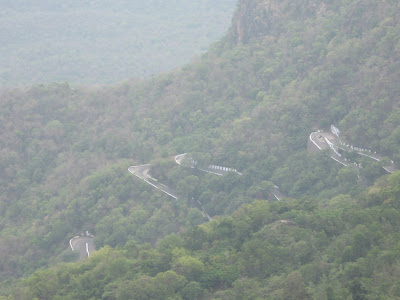 This view is spectacular at night with the twinkling lights of Salem town in sight. It gives a feeling of looking over a bed of twinkling diamonds and if one is lucky to have a moonlit night..nothing could be more romantic!

Nearby is the Rose Garden and "Gents Seat".

Rose garden is well planned but unfortunately for us not many flowers were there, may be weather was not proper for them.

"Gents Seat" is another view point nearby.

We returned back to Yercaud Lake, which is in the heart of Yercaude town.

This Lake with a picturesque pool surrounded by gardens and well-wooded trees is the first things that attract a visitor. 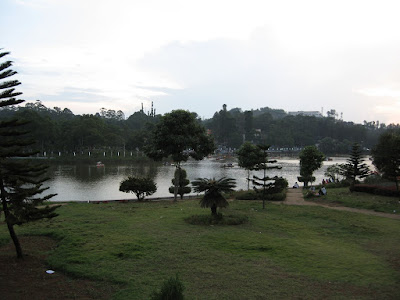 We took a rowing boat and were there in lake for about 30 minutes. I am a little fearful of water. But Mayank insisted me and I joined him.

Nearby is Anna Park, which is a small but lovely garden.

THE MONTFORT SCHOOL and THE SACRED HEART CONVENT
These are the two famous educational institutions at Yercaud imparting education to boys and girls respectively.

We took light food in the town and then walked back to hotel to take rest for the night.

Morning we woke up early. We went out of hotel and at Bus Stand took 2 cups of refreshing tea sighting the beautiful valley below in the cool and blissful breeze.

By 08:00 AM, we were again ready to explore. But before that we took breakfast at Venkateshwara.

We drove to Kiliyur falls, which is about 3-1/2 KMs from Yercaud town.

KILIYUR WATER FALLS
Kiliyur Falls is a 90-foot high waterfalls is situated amidst picturesque surroundings in Yercaud. Akasagangai waterfalls is on Kolli hills, which is known for medical herbs and plants.

Driving again was a pleasure on this route.

We parked Car till the point it could go and then started walking. As we proceeded further, the route started becoming narrow and dangerous. The hotel Manager had warned us. So we did not cover the entire distance.

But the place was fascinating, perfect place for deep meditation. Complete silence in lap of nature!!

Our idea was to visit botanical gardens next, but after reaching there, we found it to be closed on Saturday and Sunday. This I felt is not proper as most of the tourists visit during weekends.

The police has diverted the returning Vehicles through Koopanoor. This route, I felt a little longer but equally beautiful. 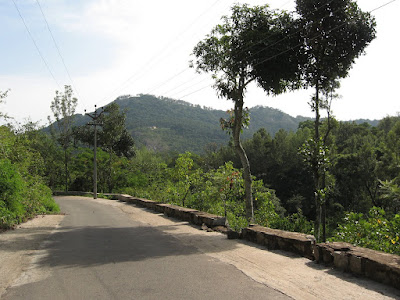 Yeracud is famous as "Poor Man's Ooty", but I did not felt any such thing. The presence of many costly resorts and hotels are proof of this. But as far as natural beauty is concerned, it is also equally good.

After descending, instead going towards Salem, we took state road to Dharma puri. But later I felt, this route was longer.

At Dharmapuri, we got the Highway to Bangalore. In between, we stopped for some time at Krishnagiri.

Krishnagiri is famous for mangoes. We went inside town and purchased more than 10 Kg of this king of fruits!!

Again about 100 KMs of drive and I reached to the comfort of home at around 8:15 PM.

Near Pagoda point, GRANGE is a Castle like building, built by the then Collector of Salem, Mr.M.D. Cockburn, who first introduced Coffee from Arabia, Apples and other fruits from South Africa between 1820 and 1829 A.D. It is believed to be the summer resort of Robert Clive - The British Big Wig of the East India Company way back in the late 1800's. It is a famous resort now.