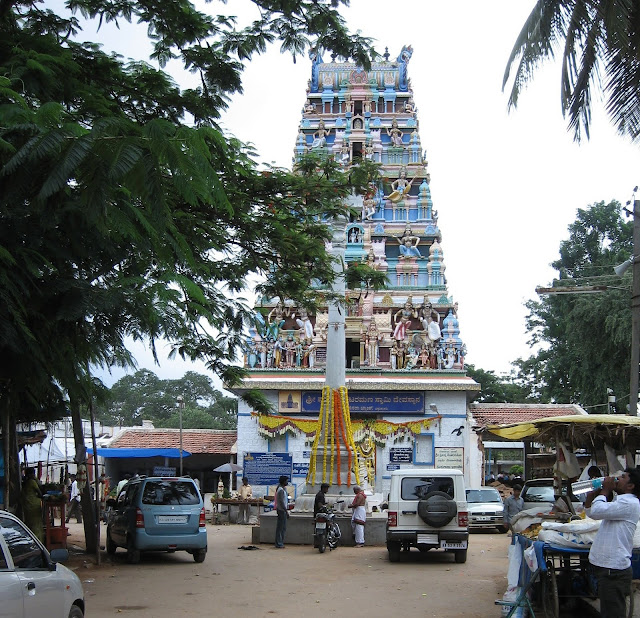 Chikka Tirupati is located in Malur taluk of Kolar district. It is very close to Bangalore. Since last some times, I was thinking to visit this sacred shrine of Lord Prasanna Venkateshwara. Finally on 15th August, Sunday, the Lord permitted us to visit this blissful place.

There are three different routes to reach this sacred place from Bangalore. I took following route and it was about 55 KMs.

I heard that there are two other routes and they are a little shorter. But I dont have much idea about them. One is via Whitefield and another is via Sarjapur.

If you want to take the route via whitefield, just reach hopefarm and you can see the board giving the direction to Chikka Tirupathi.

We were late to start in the morning as we set off by 10.00 AM. Main reason was that only around 8.00 AM, we planned about this.

There are no sign boards on this route and hence it required to ask consistently about the correct route.

After Hoskote, about 1 KMs further take right turn from below the bridge towards Malur. This is state highway. The road is good, but beware of sudden speed breakers in the vicinity of villages.

It took us about 2 hours to be there.

The temple is not very big, but beautiful. It was decoarted with colours and flowers. I feel as it was "Shravan" month and hence special prayers happening as offering to the merciful Lord of the universe.

The main attraction of Chikka Tirupati is Sri Prasanna Venkateshwara temple dedicated to Lord Vishnu. The lord is standing with his consort Sri Devi and Bhoo Devi. The right hand is in Varada hasta (the boon granting hand).

Legend
The story of this place goes like this. 'Agni', the fire god, during the incineration (dahana) of the forest of herbs (Khandava Vana), causes burn injuries to the serpent god Takshaka. Takshaka bestows Agni with a curse that he lose his 'tejas'. A perturbed Agni comes to Lord Krishna, who suggests that the way out for him is to please Lord Vishnu, who can restore his 'tejas'. So Agni gets the 'shaapa-vimochana' by performing a penance and pleasing Vishnu. With great joy, Agni builds a temple for Lord Venkateswara at Chikka Tirupathi. The lord here is aptly named as 'Prasanna Venkateshwara'. All the utsavams that are held at Tirupathi are also held here.

Chikka Tirupati is visited by many pilgrims during the month of Shravana (July - August). 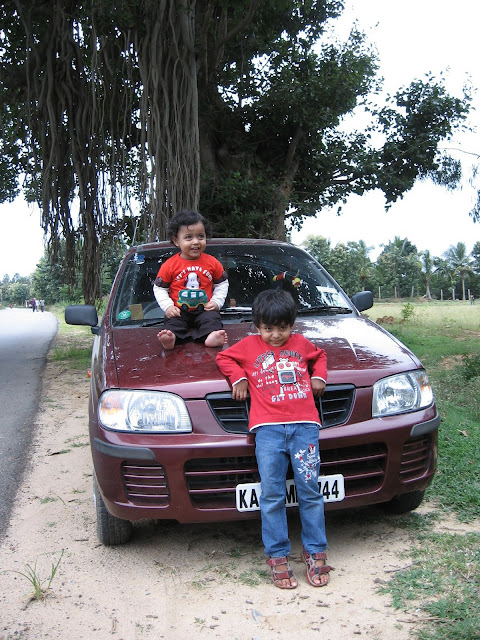 I could not found any good place to eat there. Perhaps the reason is of its close vicinity to Bangalore.
After being blessed with sacred darshan of blissful Lord, we started back. While returning, we took the a little different route from Lakkur, which is a few KMs shorter than earlier route, finally reached at Hoskote, after asking many times in between.

As we reached KR Puram, it started raining, but we continued to reach home.