One hot April late morning, I landed at Pune. It was not a leisure trip, but I tried to steal a few hours from my official trip to visit some of the iconic places from the magnificent city.
Pune airport is quite small and it’s more a military airport. I had expected it to be as grand as other metros.

It was about 1130 AM Saturday, as I checked in hotel. Immediately without wasting anytime, I took my camera and step out to explore Pune as much as possible. I had only today!

A quick check through Internet had revealed some exciting places. Through Google map, I had drawn a tentative map of these places that I could cover in the limited time that I had!
Tentative plan was a below (In order):

Quickly, I took an OLA and in next 30 minutes, I was at the lotus feet of Lord Ganpati at DagduSheth Temple.

The temple is on a busy road. It is not very big in size but nevertheless the construction and the idol of Lord is just amazing. It’s very beautiful and mesmerizing.

Dagadu Sheth Gadve was a trader and Sweet maker (Halwai). He had lost his son in a plague epidemic. This caused Dagdu Sheth and his wife to go into deep depression. To heal themselves, their Guru, Shri Madhav Nath Maharaj recommended building a Ganesh temple. This was completed in 1893.

Lokmanya Tilak, the Indian Nationalist leader and a contemporary of Dagdu Sheth, was a close friend of him. From here he got the idea of celebrating public Ganesh festival, which later proved to be an epoch making event in Indian history.

The temple is a beautiful construction and all the proceedings in the temple along with the beautiful Ganesh idol can be seen from outside. The Ganesh idol is adorned with nearly 8 kilos of gold. The lighting of the temple during the Ganesh festival is marvelous.

Queue was not much, I slowly walked in and paid my reverence to the destroyer of all evils.
Then from road, I clicked a few pics and slowly walked to nearby Shanivar Wada fort.

As a student of History, visiting fort is always special moments for me.

There is horse riding idol of Shrimant Bajirao near the entrance. 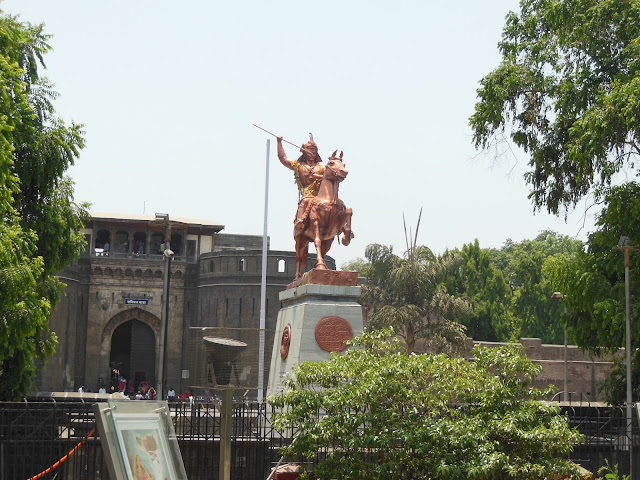 PeshwaBaji Rao I, prime minister to Chattrapati Shahu, laid the ceremonial foundation of his own residence on Saturday, January 10, 1730. It was named Shaniwar Wada from the words Shaniwar (Saturday) and Wada (residence complex).

The opening ceremony was performed according to Hindu religious customs, on January 22, 1732, another Saturday chosen for being a particularly auspicious day.

It was the seat of the Peshwas of the Maratha Empire until 1818, when the Peshwas lost control to the British East India Company after the Third Anglo-Maratha War.

It is said that the Shaniwar Wada was originally the seven storied building. Upon being attacked by the British 90 years later in third anglo Maratha war, the top six stories collapsed. 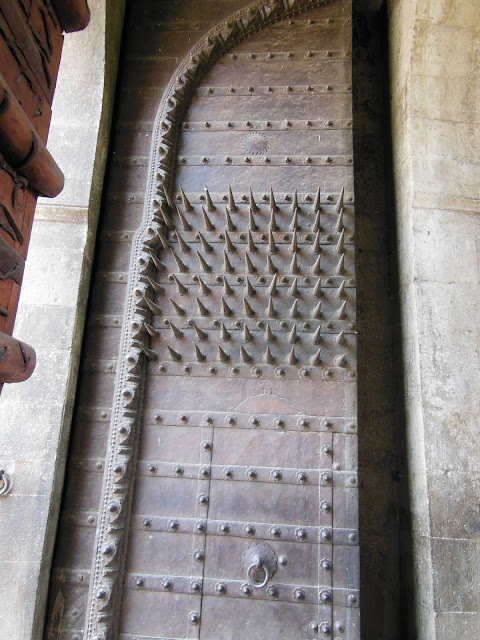 I entered the fort through the main gate, famous as The Dilli Darwaza which faces north towards Delhi.

It is a massive gate, big enough for elephants to move easily. To discourage elephants charging the gates, it has sharp iron spikes at the height of the forehead of a battle-elephant. The right pane has a small man-sized door for usual entries and exits.

A Gun kept near the entrance reminds the days of glory and gloom, of battles, of wins and losses! 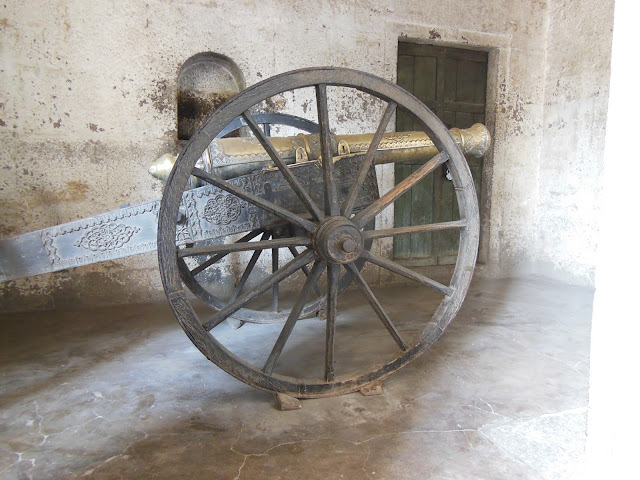 On left is the Mastani Darwajaor Ali Bahadur Darwaja, facing north. This gate was used by Bajirao I's wife Mastani.

Not much is left inside the fort now. On February 27, 1828, a great fire started inside the palace complex. The conflagration raged for seven days. Only the heavy granite ramparts, strong teak gateways and deep foundations survived.

Since the buildings were destroyed in the fire, only the descriptions of the living areas of the fort are available.

It is said that the Shaniwarwada complex was seven storeys high. On the top floor was the residence of the Peshwa which was called Meghadambari. 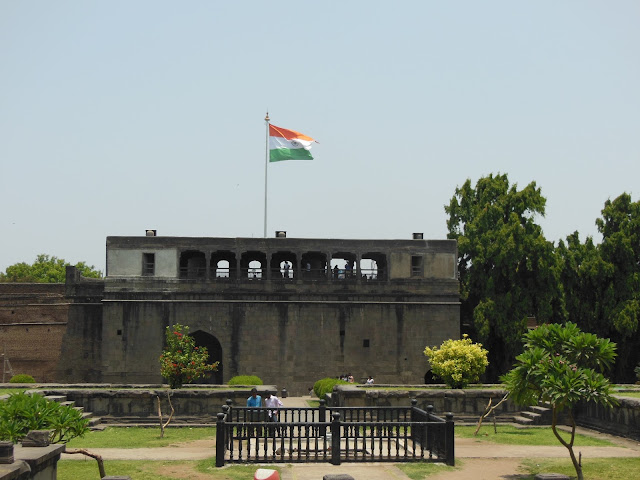 In 1773, Narayanrao, who was the fifth and ruling Peshwa then, was murdered by guards on orders of his uncle Raghunathrao and aunt Anandibai. It is said thatNarayanrao's ghost still calls for help on full moon nights.

In June 1818, the Peshwa, Bajirao II, abdicated his Gaddi (throne) to Sir John Malcolm of the British East India Company and went into political exile at Bithoor, near Kanpur. 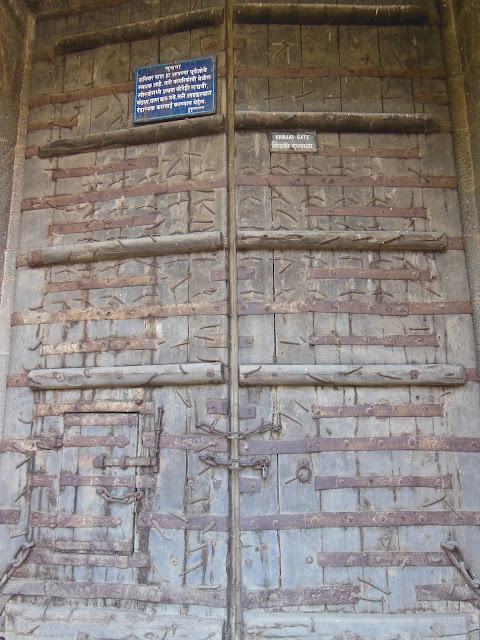 I walked slowly thorugh the garden infront. There are a few more gates. Khidki Darwaja, facing east, is named for an armoured window it contains. Then there is Ganesh Darwaja, facing south-east, named for the Ganesh Rang Mahal, which used to stand near this door. It could be used by ladies at the fort to visit the nearby Kasba Ganapati temple. 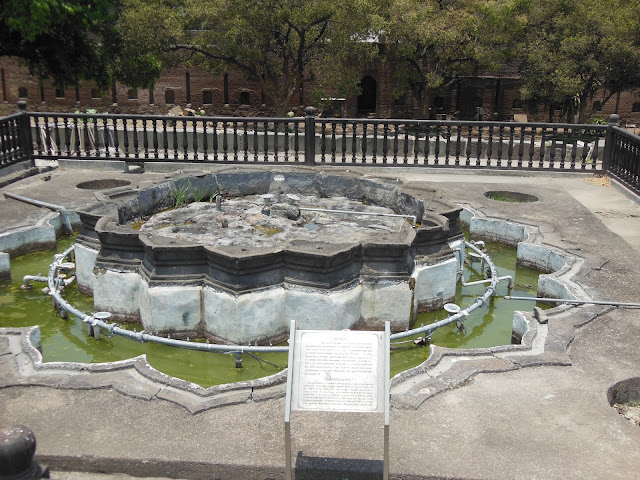 There is also Narayan Darwaja, facing south. It obtained its name after Narayanrao Peshwa.

The fort has an impressive lotus-shaped fountain: the Hazari Karanje. It was constructed for the pleasure of the infant PeshwaSawaiMadhavrao. It was designed as a sixteen petal lotus; each petal had sixteen jets.

Just above the main gate, there is a verandah, made of wood. The surrounding view is excellent. This seems to one of the very few wooden structure survived the wrath of times!

This fort is not as massive as those of forts in Delhi, Gwalior, Agra and Rajasthan etc., but no less in history and importance.

A must visit, if you are at Pune. 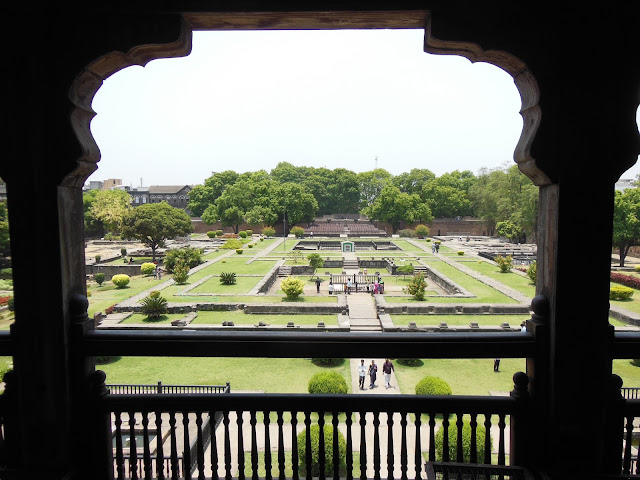 Lord Anshumaan was his full glory. But I had to brave this. Checked with Google about Raja Kelkar Museum and started walking as per the guidance.

I did a mistake at one point and took wrong turn. Finally, with help of some locals, I was able to get it.

The Raja DinkarKelkar Museum contains the collection of Dr. DinkarKelkar (1896–1990), dedicated to the memory of his only son, Raja. The three-storey building houses various sculptures dating back to many centuries.

Again as a student of history, museums are an essential part of my trips.

The Kelkarmuseum now holds over 20,000 objects. These consist of mainly Indian decorative items from everyday life and other art objects, mostly from the 18th and 19th centuries.

There is depiction of "Mastani Mahal". Raja Kelkar made an attempt at trying to reconstruct the palace of Mastani, (wife of the PeshwaBaji Rao I) with its description.
Wonderful collection.

I had not eaten anything and it was well past noon. Feeling badly hungry but had not much time so with some thoughts took an Ola to Southern Command Army Memorial.

Its in the cantonment area. When I reached there it was closed and was scheduled to open at 1530. I was roaming nearby to pastime and was taking a few snaps. One policeman enquired about it why I am clicking. I asked if there are any orders against it. He didn’t asked anything further.

From Kelkar museum, the plan was to visit the SarasBaug Ganapati Temple. With some thoughts I decided to skip it for the time and instead took a cab to Army Memorial.
Idea was that otherwise I may not be able to visit Army Memorial or Aga Khan palace. 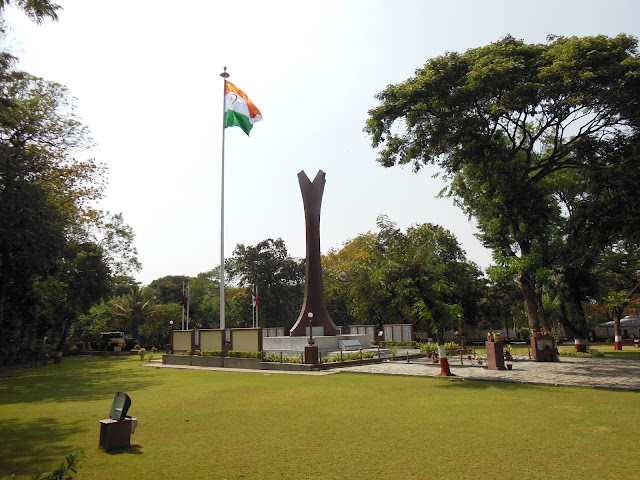 The National War Memorial Southern Command Memorial is an expression of the nation’s gratitude for the supreme sacrifice made by its bravest men. 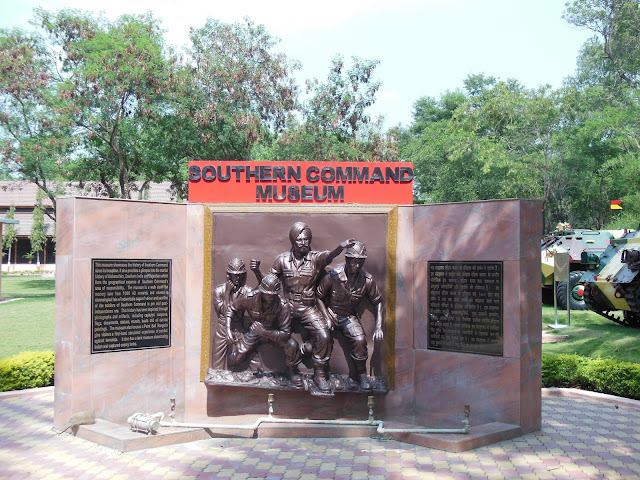 A committee of citizens formed by the Indian Express resolved in January 1997 during the golden jubilee year of independence that citizens would begin erecting a memorial in Pune as a mark of their gratitude for the guardians of our frontiers. The committee under the chairmanship of Brig NM Grant (retd), took on the task of fund raising and also approached the Southern Command for a suitable piece of land. 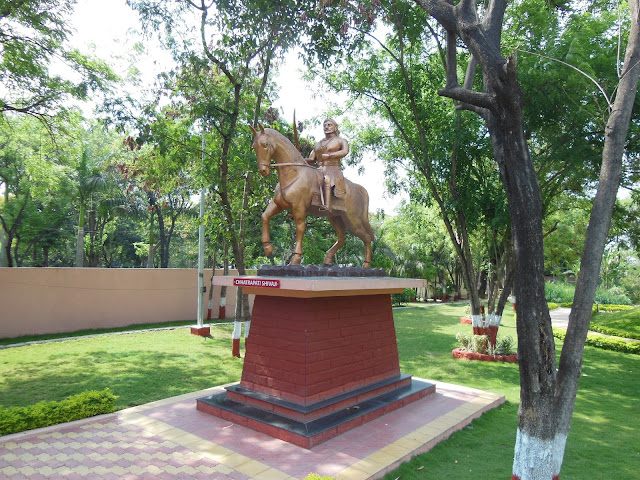 Work began on 15 Aug 1997 and exactly one year later His Excellency the Governor of Maharashtra Dr PC Alexander, dedicated the Memorial to the Nation. The Memorial has an 18 meter hight granite tower with marble Panels carring names of the martyrs on three ides. Name of 2847 Officers, Junior Commissioned Officers and Other Ranks, who laid down their lives in action since 15 Augest 1947 have been inscribed on the marble panels. The names have been listed year-wise and alphabetically. 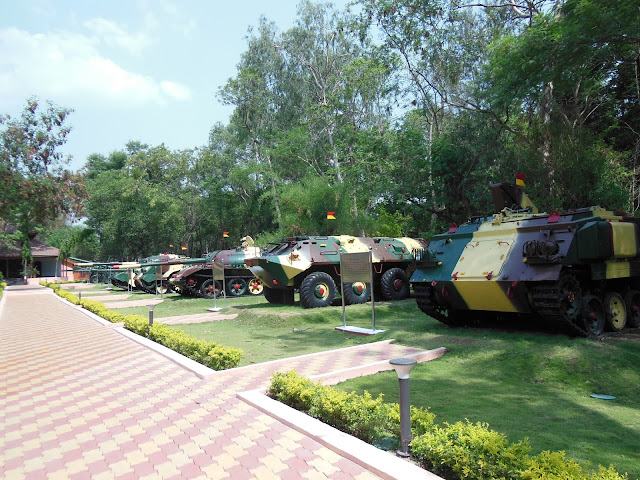 It also has a good collection of artillery pieces and a few galleries depicting the famous wars and also weapons, trophies and dress etc. 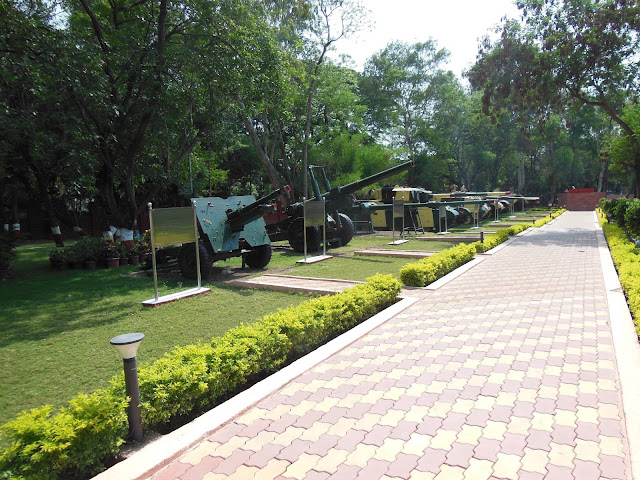 During the Vijay Diwas celebration in 2011 a 101 feet tall flag mast was inaugurated by Mr Navin Jindal, MP along with the then GOC-in-C Southern Command. 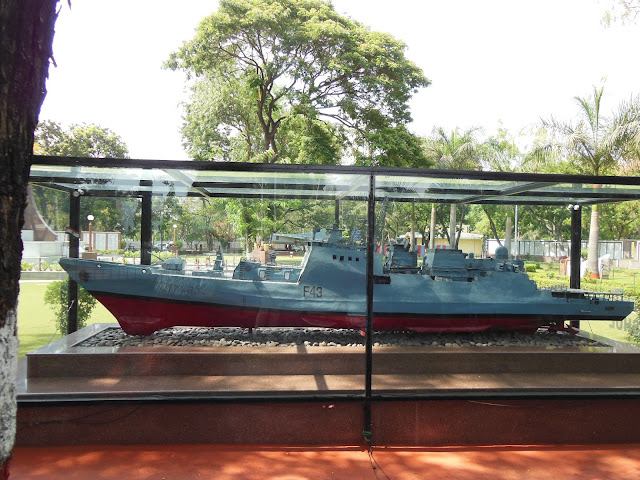 A Mig 23 BN, used in the Kargil War, is on display at the memorial.A replica of the now decommissioned frigate INS Trishul, which served in the Liberation of Goa and the Indo-Pakistani War of 1971, is also on display. 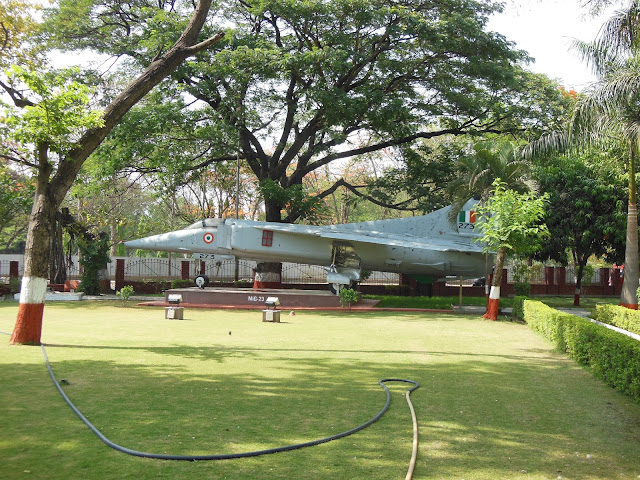 It is no less than a place of pilgrimage. 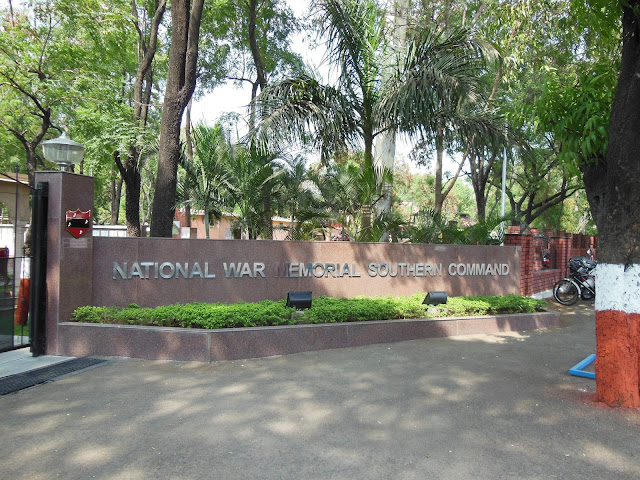 Salutations to the braves!

It was time to take taxi to Aga Khan Palace. 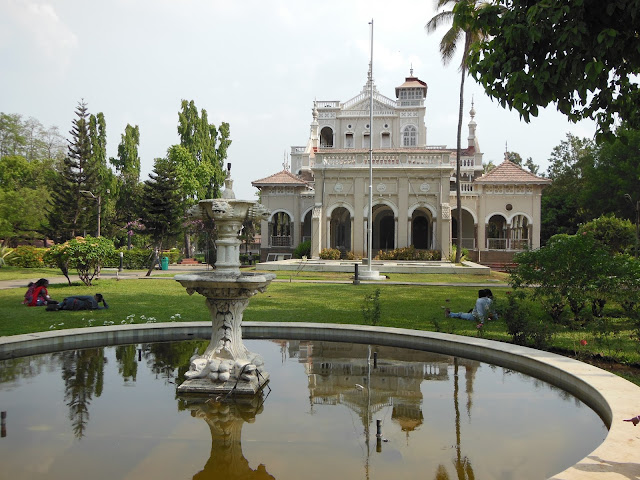 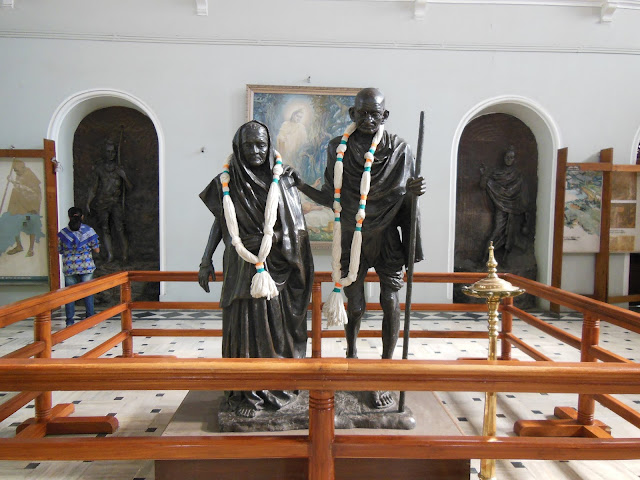 There is also a memorial on Gandhi where his ashes were kept. 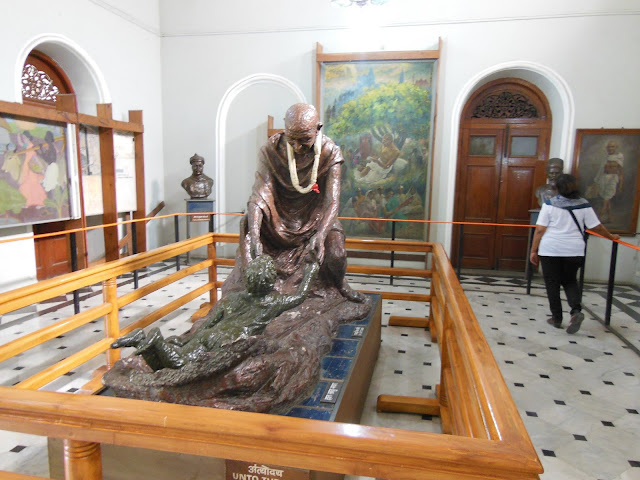 Mahatma Gandhi, his wife Kasturba Gandhi and his secretary Mahadev Desai were imprisoned in the palace from 9 August 1942 to 6 May 1944, following the launch of Quit India Movement. 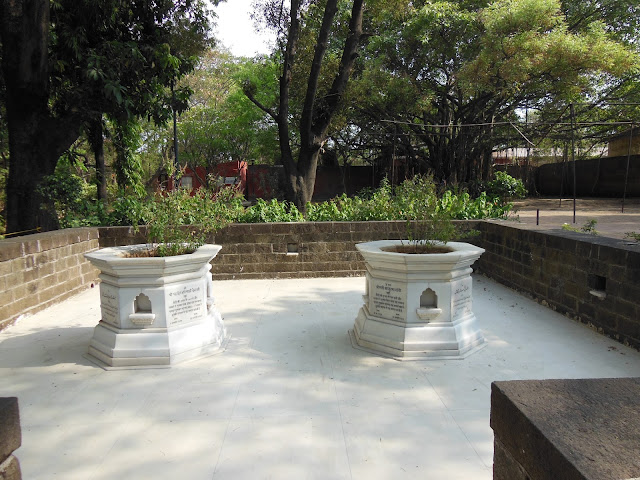 In 1969, Aga Khan Palace was donated to the Indian people by Aga Khan IV as a mark of respect to Gandhi and his philosophy. 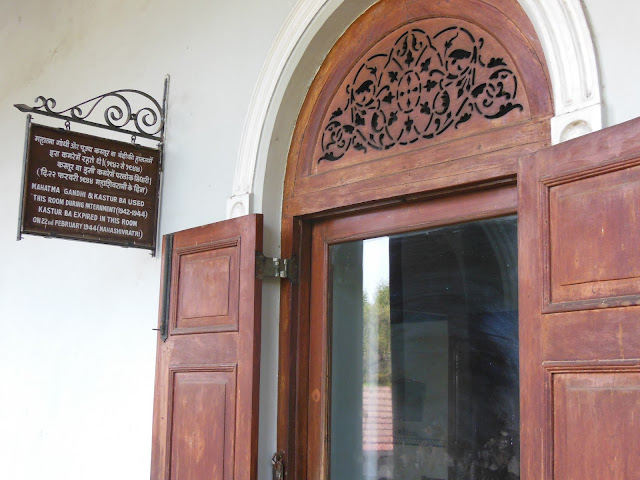 Today this landmark building stands as a testimony to the times of freedom movement, which has seen very closely the days of Raj and fresh air of freedom. 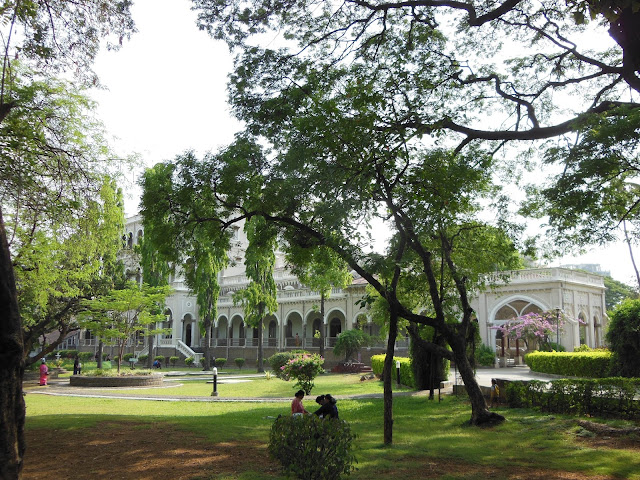 Truly a majestic building and a must visit to feel the aura of presence of mahatma. 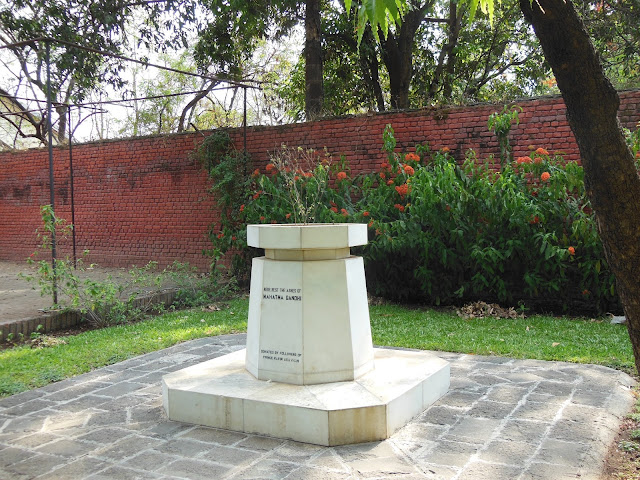 There were many youngsters there more interested in chatting and playing around. Better is to observe the sanctity of the place. 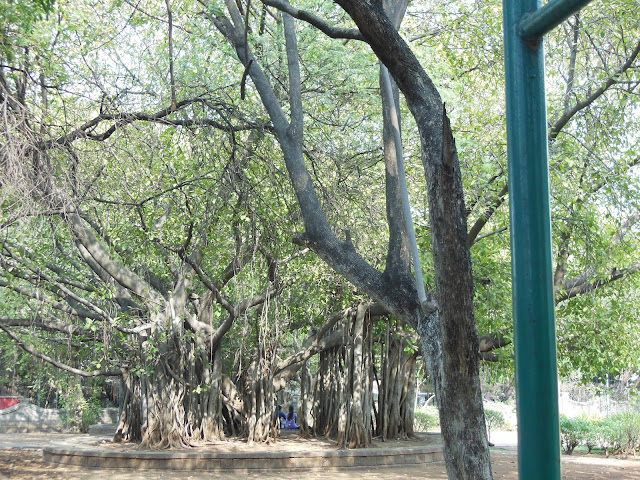 It was evening now. I had planned the SarasBaug Ganapati temple as well, though I had time but was feeling badly tired. So deiced to go back to hotel and try my luck next day if get any time.

Next day evening, I was free at about 6 PM. One of the colleague offered me to drop at SarasBaug Ganapati Temple. Happily, I accepted his offer.

He suggested me to visit the temple on Parvati hills nearby, but thinking of time etc., I decided to visit only the Ganapati temple, where I reached at around 7 PM.

Hope next visit will have some more time for me.

Pune is a delight for tourists. 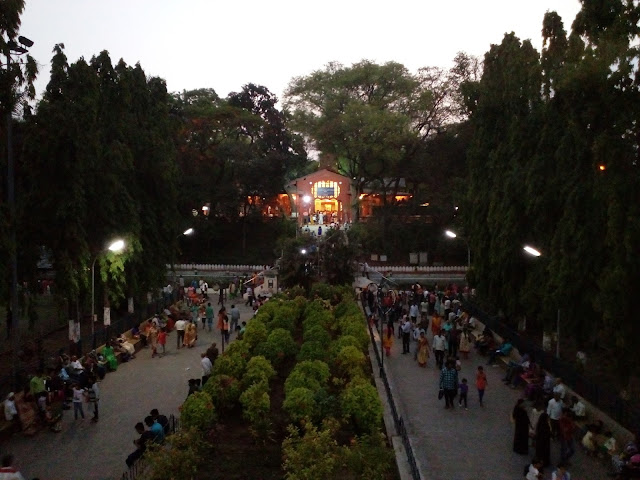 The temple is located in midst of beautiful gardens. There was some rush but I was able to reach in the sanctum without much difficulty. The prayers had just started and I was fortunate to be there at that auspicious moment.

Anyone visiting here must try to enjoy the bliss of evening prayers. 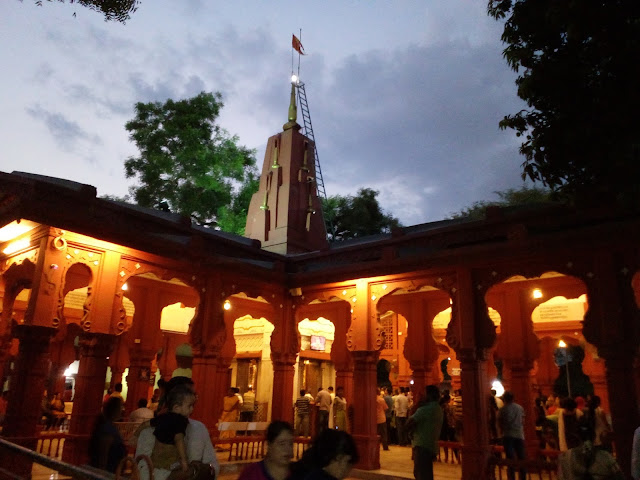 The Sarasbaug temple houses the idol of Shree Siddhivinayak.

Soon after completion of Shree Devdeveshwar Temple on Parvati hill, Shrimant Balaji Baji Rao decided to construct a lake at the foothills of Parvati. An island was retained in the middle of this lake. Later on, a beautiful garden was created on this island.

Shrimant Nana saheb Peshwa gave it a name, “The Sarasbaug ”.

In 1784, Shrimant Sawai Madhavrao Peshwa built a small temple in Sarasbaug and installed the idol of Shree Siddhivinayak Gajanan.

Getting blessed, I took a cab back to hotel hoping for another trip soon to this magnificent place, ever blessed by Gajanana!

So my short but exciting sojourn to Pune ended this time with hopes that again soon I will have opportunity to visit this beautiful city.